During the 19th century there were many distinct styles of actual Victorian homes, ranging from seaside cottages to Italianate villas, Queen Anne cottages to romantic stone castles, brownstones, octagon houses, and mansard-roofed mansions. Victorian house styles were the product of an era rather than a specific idea about house design, resulting in a variety of both interior and exterior layouts and uses of material.

In Victorian America, people placed great importance on the style, size and decoration of their homes, always striving to over-achieve and impress. Mass-production and factory-made building parts carried over a system of rail lines enabled the building of large, elaborate, affordable houses throughout America. The features of Victorian house architecture were more eclectic and diverse in nature as opposed to owning rigid and exclusive characteristics.

A variety of Victorian styles emerged: Gothic Revival, Italianate, Second Empire, Queen Anne, Stick Style, and many others. There were no single set of features which specifically defined the Victorian house. Pictures of Victorian houses, such as the Carson Mansion, will illustrate the endless combinations of structural characteristics of Victorian architecture in American residences. Labels such as Queen Anne, Italianate or Eastlake are terms which refer to the use of certain decorative elements, but not necessarily an indication of a specific Victorian architectural style. You will find that many Victorian houses are a combination of several style traits. (See the Carson Mansion - the ultimate Victorian)

Like the Gothic Revival, the Italianate or Italian Villa style featured picturesque and romantic architectural elements. The Italianate style was fashioned after the medieval farmhouses and villas of the Italian countryside. This style house was designed to fit naturally into their rustic settings and were irregularly shaped. The most common features include: 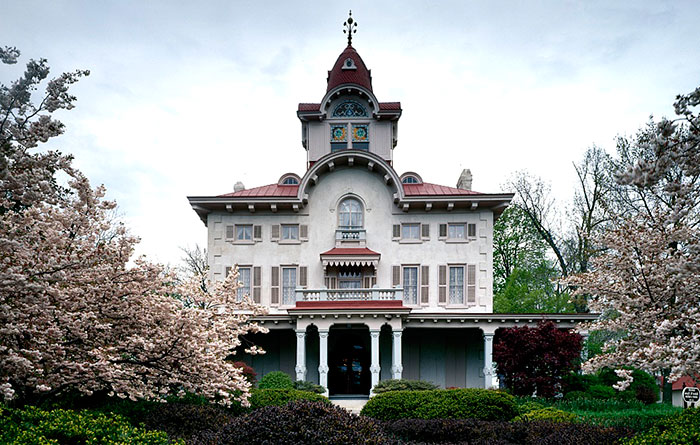 Ryerss Victorian Mansion, an Italianate style villa, was built in 1859 on 85 acres in Burholme Park, Philadelphia. Villas appealed to the tastes of the middle class which was rising to affluence in America. [PHOTO CREDIT: PHOTOGRAPHS IN THE CAROL M. HIGHSMITH ARCHIVE, LIBRARY OF CONGRESS, PRINTS AND PHOTOGRAPHS DIVISION]

The Second Empire, or French Second Empire style, was also called the Mansard style. This architectural style, with its popularity peaking between 1865 and 1880, originated in France. Some of the great hotels built in the late Victorian era featured these architectural elements. But the most striking feature of Second Empire architecture is the Mansard, or “French” roof. The Mansard roof, named after the 17th century Parisian architect Francois Mansart, provides light and headroom in the upper story attic. It was found on not only the mansions of the wealthy but on ordinary houses, including row houses in American cities. Characteristics of the Second Empire include:

The peak period of the Queen Anne style was 1880–1900, and Richard Norman Shaw and other English architects are credited with advocating its widespread success. The most common features include:

Above house is Elmhurst Mansion, also known as the House of Friendship, in Wheeling, West Virginia. Samuel S. Bloch, the founder and president of the Block Brothers Tobacco Company, built this Queen Anne-style house in 1891. The mansion boasts Queen Anne features: steeply pitched roof, towers, turrets, balconies, spacious porches and bold paint colors. The large Victorian mansion was named “Elmhurst” because of the large elm trees which were planted by Mr. Bloch himself. Also located on the estate were a home for the grounds keeper, a small playhouse used by the Bloch children, a well that furnished fresh spring water to the estate, and a bungalow which was chiefly used by Jesse and Harold Bloch to entertain college friends.

This 19th century structure is an exceptional example of the Queen Anne style of Victorian architecture. Known as the J. Milton Carson House, and locally known as The Pink Lady, it is situated across the street from the famous Carson Mansion in Old Town Eureka, California.