The Victorian riding habit of the 1860s was no longer tight, well-shaped, with close sleeves. It now featured loose sleeves with deep cuffs on a loose jacket or basque. An over-jacket of cloth or sealskin was worn for rough weather. Ladies’ riding habits were adapted in shape to the figure of the lady and usually made a foot longer than an ordinary skirt and in a light cloth and in a dark color. 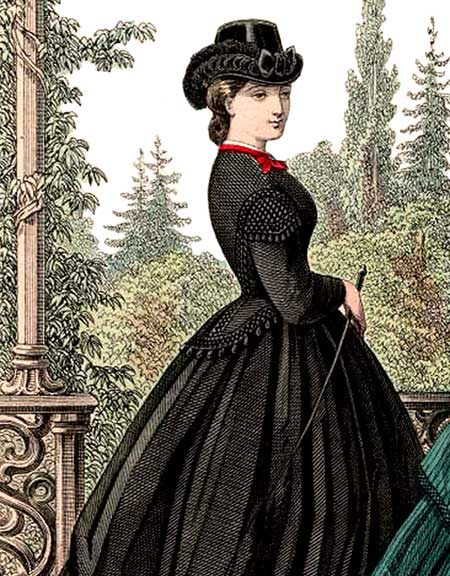 Long skirts in the riding-habit were discouraged as not to alarm horses or become entangled. For country riding the skirt was bordered a foot deep with leather. At times the riding dress was opened in front and the sleeves loosened at the wrist, with a white-linen chemisette and sleeves. A plain white collar of fine lawn was worn with the habit along with deep lawn cuffs underneath the sleeves. Long boots were a great comfort and protection in riding long distances. Gauntlet gloves of thick leather and a delicately-twined whip accessorized the riding costume. 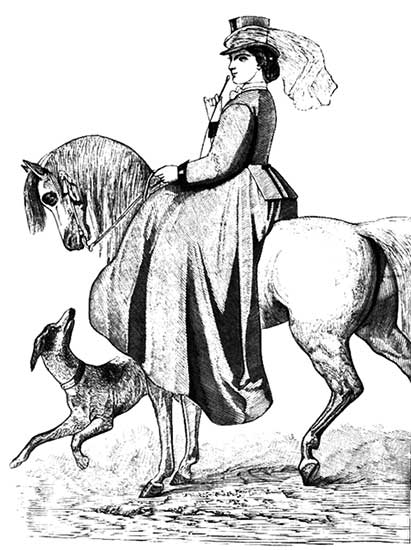 VICTORIAN RIDING HABIT, 1862: Riding habit of dark brown cloth. The skirt is one yard and a quarter in length when hemmed. The body fits closely to the figure with square skirts behind. The coat sleeve fits the arm loosely, but is closed at the wrist with a velvet cuff. Small linen collar and neck-tie; brown Swedish gloves; low-crowned hat and brown veil. 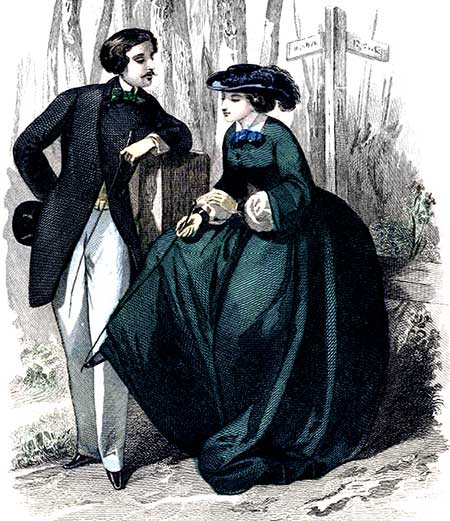 The best dressed Victorian horsewoman did without her petticoats when riding and wore nothing more than a flannel chemise with long colored sleeves under her trousers. Ladies’ trousers were of the same material and color as the riding habit. The trousers were sometimes full and flowing “like a Turk’s” and fastened with an elastic band round the ankle, indistinguishable from the skirt. In this riding costume, which was made amply warm by the folds of the trousers plaited like a Highlander’s kilt and fastened with an elastic band at the waist, the Victorian lady could sit down in a manner impossible for one encumbered by two or three short petticoats. Nevertheless, some ladies preferred a quilted petticoat that was not too full. It was lined with silk or glazed muslin. 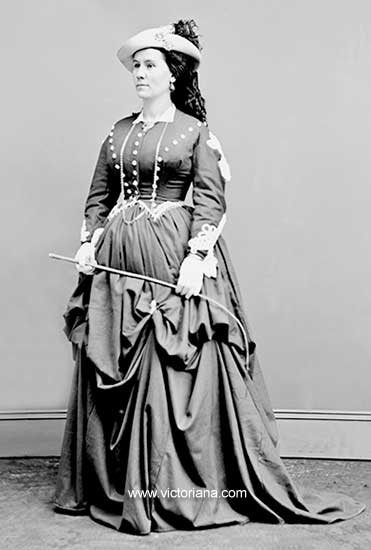 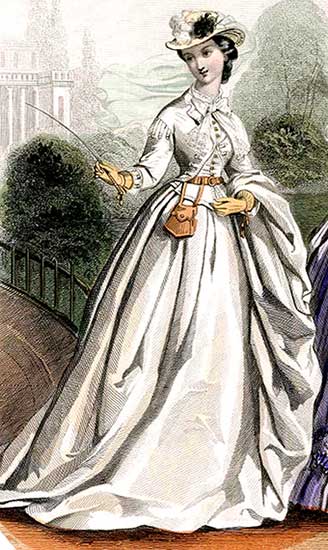 The Victorian round riding hat, masculine in its form, was popular in the mid-19th century. By the 1860s, it was exchanged for a slouched hat, turned up round the brim — or sometimes turned up on either side, and coming with a point low down upon the forehead. Other versions were three cornered. Formerly the round hat was unembellished by even a bow; but the slouched hat featured a long, sweeping feather on one, and sometimes on both sides. The plumes of the ostrich, the cock, the pheasant, the peacock, and the kingfisher were featured. The color of the feather was varied, but was usually black or brown, like the hat. The feather was full, well-curled, long and firm, as if taken from an ostrich in a molting condition. In winter, the hat was of felt, soft, pliable and durable. In summer, the Victorian riding hat was of a fine straw, often referred to as Leghorn. 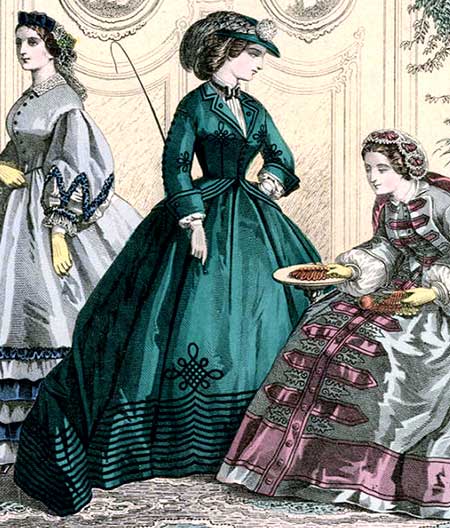 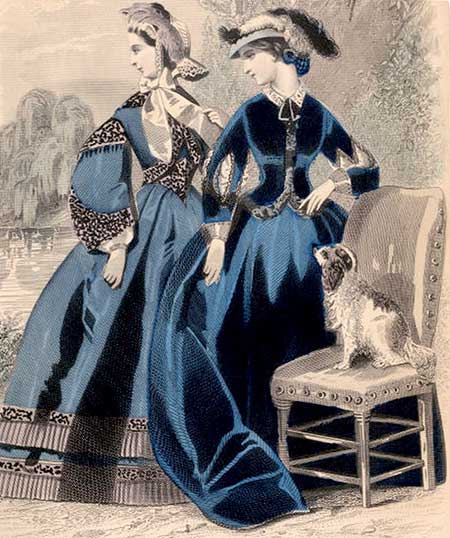 VICTORIAN RIDING HABIT, 1862: Riding habit of blue cashmere. The skirt is 3/8 longer than an ordinary dress skirt. The body is made with a “Hungarian” basque. The sleeves are close to the wrist, but slashed about the middle of the arm, showing a white undersleeve. Straw hat, trimmed with white and black plumes. 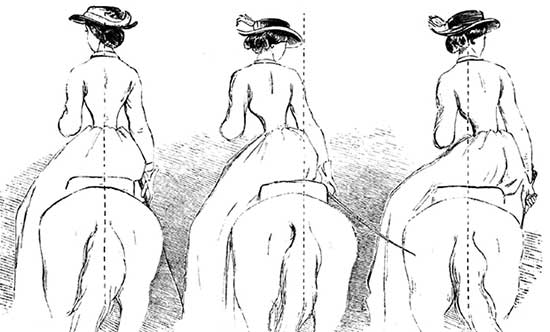 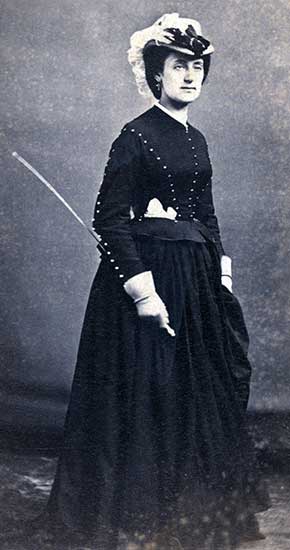 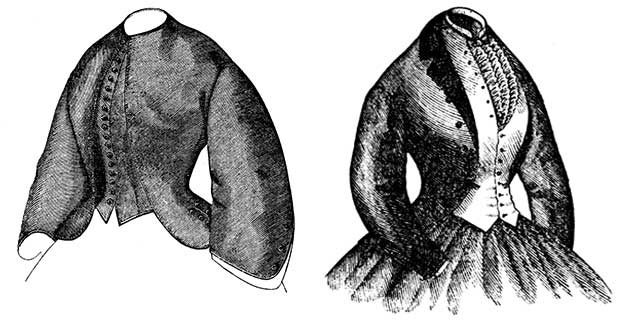 VICTORIAN RIDING JACKETS, 1863: Two styles of riding jackets, made of cloth or alpaca. The vest was of the same material as the jacket, or of pique. 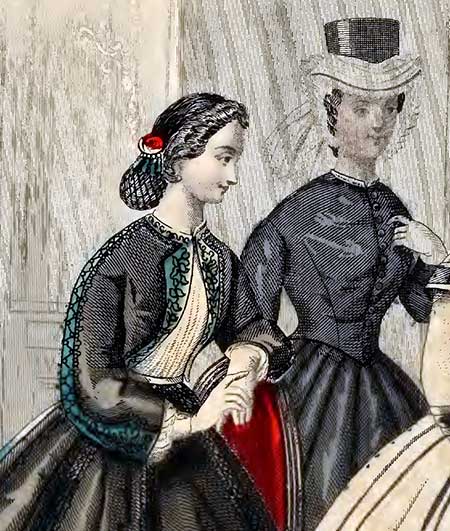 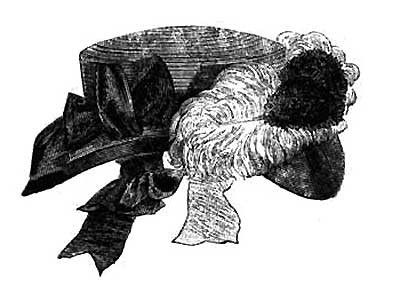 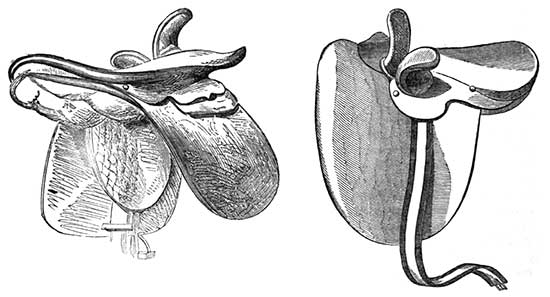