The importance of 19th century photographs as a source for the study of Victorian fashion has been well documented but another classification of photography that allows us to revisit the past is occupational portraits. Nineteenth century photographs featuring the subject employed in a period occupation or hobby are fascinating. The subject of the photograph is seen with the tools of his trade or goods that he has made. 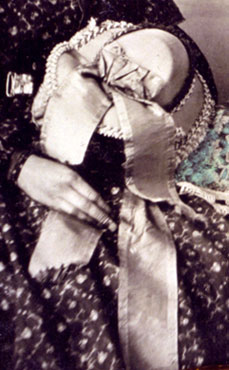 [Note the thimble, a tool of the trade, on the milliner’s finger.] 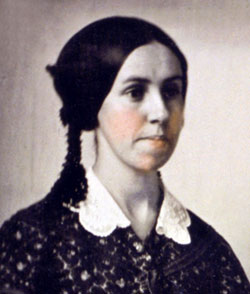 The occupational portrait featured is a circa 1854 quarter-plate ambrotype of a milliner. The photograph shows a woman and girl seated at a table with bonnets and a doll. Also highlighted are her “tools of the trade” — a thimble and several spools of thread. It is noteworthy that occupational portraits of women taken during these early years of photography are exceedingly rare. 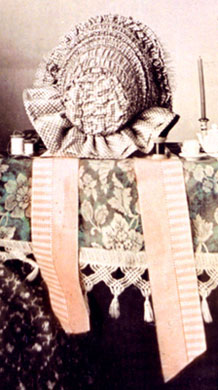 [Three spools of thread are staged with the bonnet.]

At this time, the millinery business was one of the few respectable occupations available to women who sought employment. Milliners could work in their homes while they raised their families. They were paid by the piece, which provided a very small income compared with factory work. The limited choices for women during the mid-nineteenth century are described in this excerpt from “The Diary of a Milliner“:

“I am left a widow with the necessity upon me of getting my own living, and an abundance of vitality and energy wherewith to accomplish it. There is a something telling me it is for my good to be doing something… But to do something which earns a living will mark me masculine and vulgar. I can live with my relatives, and retain my standing in society…. I am told that it is not genteel and fashionable for young ladies to work….” 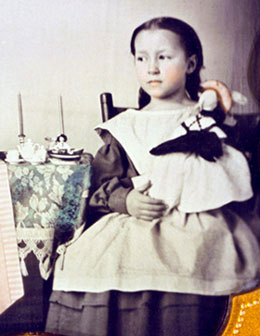 [Young girl poses with a doll and a child-size tea set.]

“I decide on going to work because it suits my pleasure so to do. What shall I undertake? Shall I go on a salary, or engage in some business of my own? Why should I go on a salary when I am as capable of managing a business, and obtaining all the profits of it as the one who might employ me. But what business can a woman establish herself in? Men monopolize everything.”

“I begin to see some point to the woman’s rights question. Why is there a masculine monopoly of business? Why shouldn’t woman compete with men in the race for earning money and getting a living? There are certainly no legal objections to her doing it; no moral ones that I can see. The chief difficulty appears to lie in her own capacity, or rather lack of capacity, physical and mental, and in the social atmosphere with which she is surrounded.”

“To be sure woman in her present status is not fitted to undertake all kinds of business. Her manner of dress, and other habits, would make it rather inconvenient for her to go to the mast-head in a gale, or handle goods in a wholesale grocery establishment. She has as much as she can attend to out-of-doors to hold up her trailing garments, adjust her sun-shade, and make a graceful appearance in the eyes of the other sex.”

“I can’t change the social condition of woman. My wisdom is to make the best of it. There must be some kinds of business that a woman can undertake. On thinking it over nothing presents itself but a fancy-goods store, dress-making, millinery, or a candy shop. There are but few kinds to choose from, but business will be independence. There will be no one to say me aye or nay, and that will be a glorious state of existence, even if I flourish in a candy shop.”