Although the pantry vanished from the “modern” homes of the mid-20th century, today it has re-appeared as one of the most requested features in new homes. We often see large well-appointed butler’s pantries in period dramas but do we know the origin of this specialized room?

In centuries past the Buttery or Butlery was the office of the Butler or Bottler, the dispenser of drink; while on the other hand, the office of the Server or Sewer was the Sewery, the depository of napery, plate, and so on. 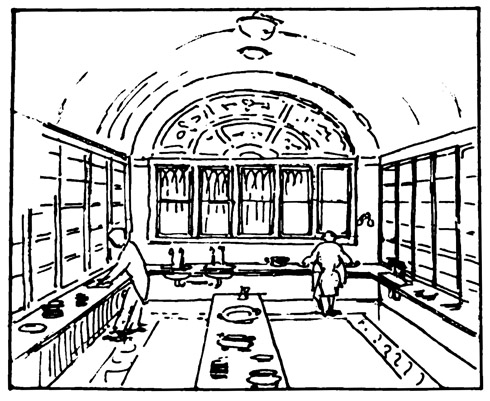 In the 19th century, the butler was both butler and chief server; and his Pantry, so called, accommodated both the service of wine and the service and storage of plate. The Pantry was originally the Bread Store; and it became combined with the Napery as the Sewery. This became combined in its turn with the Buttery; when the bread was transferred to the Larder. The name of Pantry however, was still retained: hence the Butler’s Pantry. 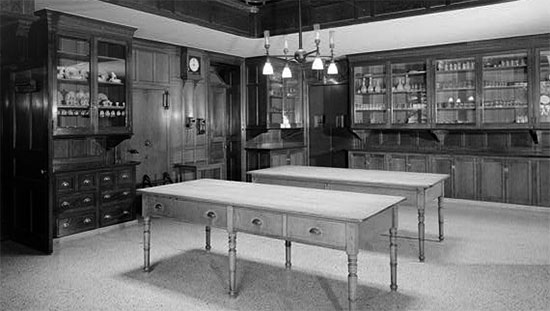 The 19th century was a time when servants were plentiful and elegant dinners were served with much promptness and precision of detail. Grand Victorian butler’s pantries featured the space and furniture to store the china and serving pieces needed and were support rooms of the kitchen. A Victorian butler’s pantry would be as near as possible, indeed close, to the dining room, for convenience of service while the kitchen was usually kept a significant distance away to keep kitchen smells out of the gentry’s end of the house. It would be removed from general traffic, and especially from the backdoor, for the safety of the plate. The communication with the wine and beer cellars would then be, in a manner, private.

A proper Butler’s Pantry would be about half the size of the kitchen, say from 12 or 14 square feet to up to twice that size. It was accessible through swinging doors fitted with kick-and push plates. The furnishings consisted of a small dresser containing a pair of lead sinks with folding covers for hot and cold water respectively, for washing the good crystal and china. The pantry typically featured large floor to ceiling built-in cupboards or over-sized kitchen dressers for glass, etc., a moveable table, perhaps a napkin-press, drawers for table linen, shelving, hat pegs, and a closet for plate with sliding trays.

When the plate was valuable, it was usual to attach to the butler’s pantry a fire-proof plate safe with a brick enclosure and iron door. At times a separate room for cleaning the plate, called the Plate Scullery, was useful where there was much work to do. It would open from the Butler’s Pantry alone, and would contain the usual pair of sinks and a dresser. See photos of elegant Butler’s Pantry Designs.