Sotheby’s upcoming December auction, 19th and 20th Century Sculpture Including Highlights from the MEAM Collection, features a magnificent bronze sculpture by famed Thomas Thornycroft (1815-1885) of British Queen Victoria on horseback. The statue depicts Queen Victoria wearing a feathered hat, seated side-saddle on a horse with its right foreleg raised. The sculpture is signed and dated: T. THORNycroft. FECiT / LONDON 1853, inscribed: ART-UNION, of, LONDON. 1854 and stamped: T. THORNYCROFT LONDON / PUB JAN 1 1854. The statue measures 54 by 66cm (21¼in. by 26in). 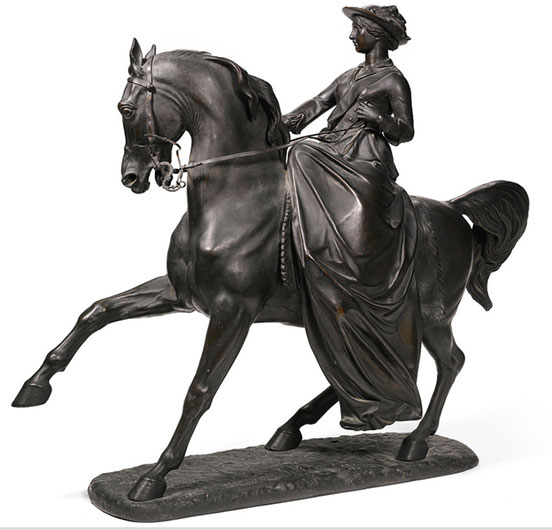 The pose of the statue is most likely derived from a similar equestrian group executed in marble by Thomas Thornycroft and his wife Mary, which was exhibited at the 1851 International Exhibition. The pose of the horse appears to be taken from popular depictions of Queen Victoria reviewing the troops at Chobham on 21st June 1853 and is one of about 50 commissioned by the Art Union of London for distributuion as annual prizes 1854-9. 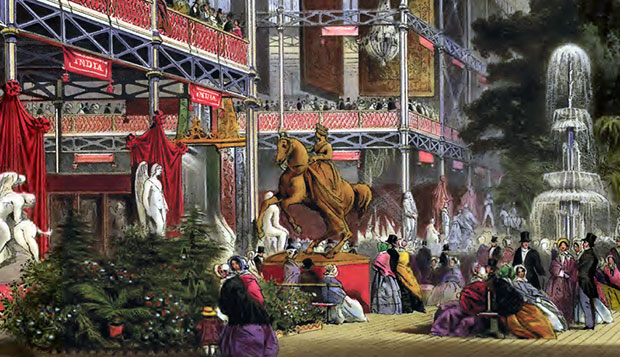 The Great Exhibition in 1851 was an international exhibition of manufactured products. It was conceived by Henry Cole and Prince Albert, and assembled in a purpose-built Crystal Palace in Hyde Park. Many of the objects in the Exhibition were used as the first collection for the South Kensington Museum which opened in 1857 and later became the Victoria and Albert Museum. When visitors to the Great Exhibition in 1851 first entered Paxton’s Crystal Palace they were at once faced by Thornycroft’s life-size equestrian statue of Queen Victoria. 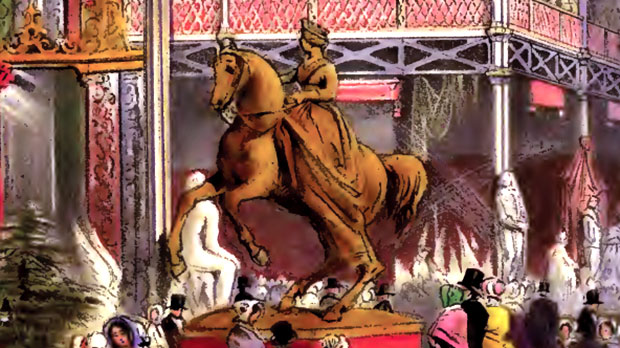 The statue’s innovative representation of the young Queen Victoria in contemporary clothes riding her lively Arab stallion was considered by some critics as too modern. The portrait was selected by the Art Union of London for reproduction as a bronze reduction following its exhibition at the Royal Academy in 1854. There were about fifty such pieces commissioned by the Art Union of London to be distributed as annual prizes between 1854 and 1859.