Erté, a Russian-born French artist and designer, had a long association with the fashion magazine, Harper’s Bazaar. Born in in St. Petersburg, Russia as Romain de Tirtoff (1892–1990), he flourished as the foremost designer in early 20th century fashion, theater and interior décor. In 1915 he began his extensive relationship with Harper’s Bazaar, during which time he created over 240 covers for the magazine. 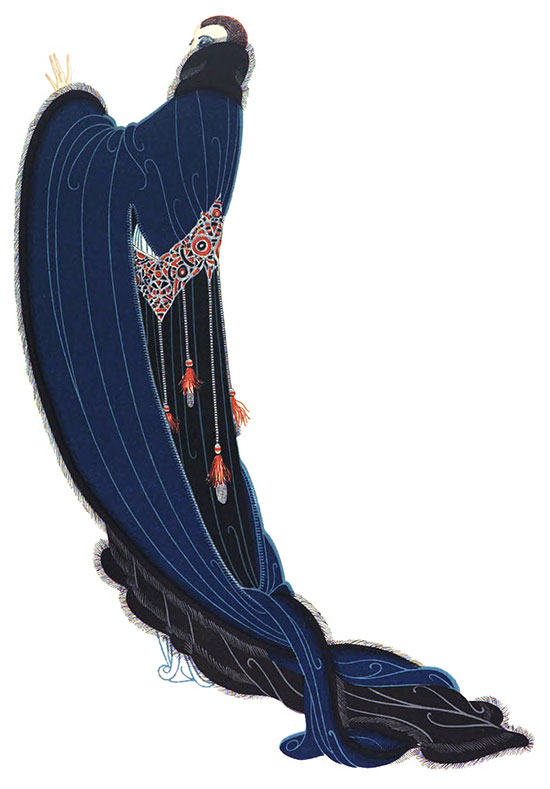 OPERA COAT, C.1916
Who but Erté could conceive of sleeves so long that they loop about the full velvet train and girdle that is all points and tassels? The front of this sumptuous opera coat differs but little from the back. The tassels are there and the fur bands, but the lower edge of the skirt is several inches from the floor. 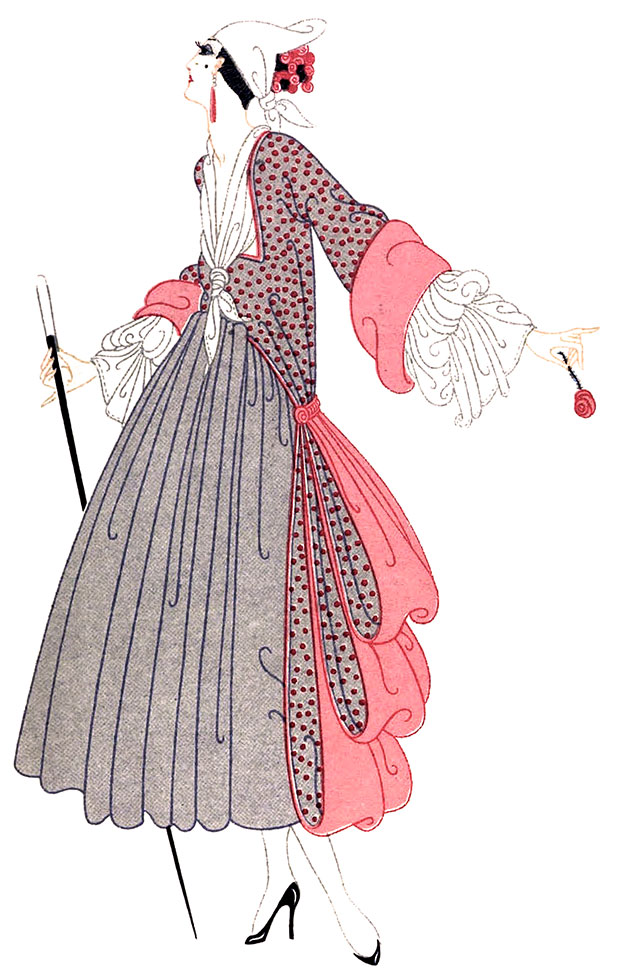 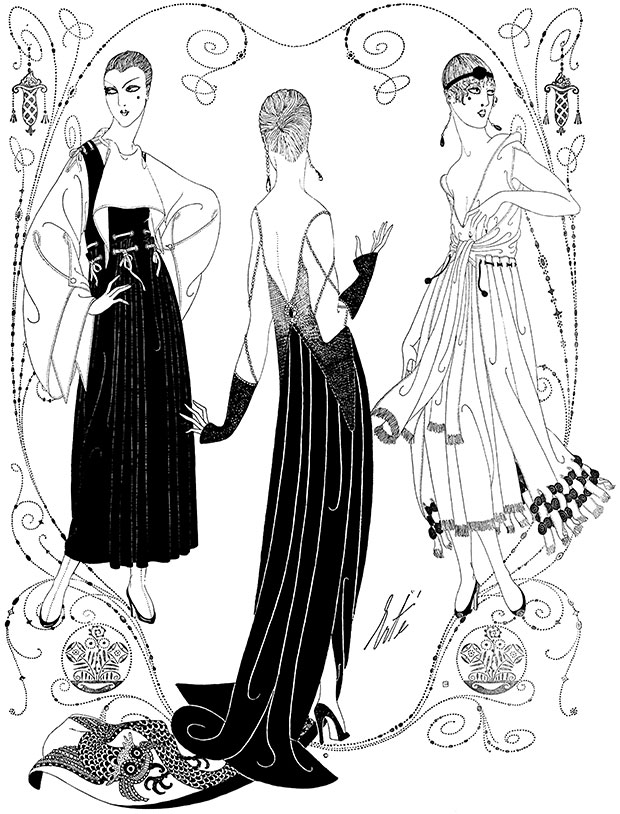 LEFT: SATIN DRESS, C.1917
“Souvenir Lointain” is a black satin frock that is worn with a blouse of white organdie, only the sleeves and collar of which show. Blue ribbon lacings join the corsage and skirt and hold the bodice on the shoulders.
CENTER: EVENING GOWN, C.1917
Barbaric in its splendor is an Erté gown of black satin with bodice of crystals and jet and satin sleevelets embroidered in jet and held by ropes of diamonds. The two-piece skirt, cut longer in front than back, is lined with silver tissue. The long front breadth, in curling round to the back, turns over and forms a train on which is embroidered a dragon in diamonds, crystals and jet.
RIGHT: DANCING DRESS, C.1917
The debutante who possesses Erte’s frock “Le Printemps de la Vie” will be the envy of all her friends, for every girl will want a fringed dancing dress of white taffeta with bands of faded silk roses.

REDINGOTE, C.1916 A single button fastens the redingote of blue-green velvet and holds in place the muffler that began as a collar. Cuffs of skunk that might be individual melon muffs and a jockey cap are touches that lend charm to the costume. As for the skirt, it is short and, like the redingote, lined with orange satin which turns over the edges in a border. 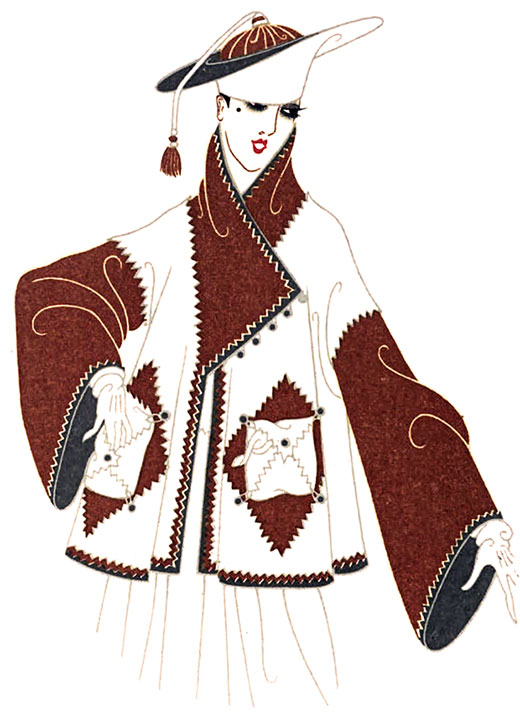 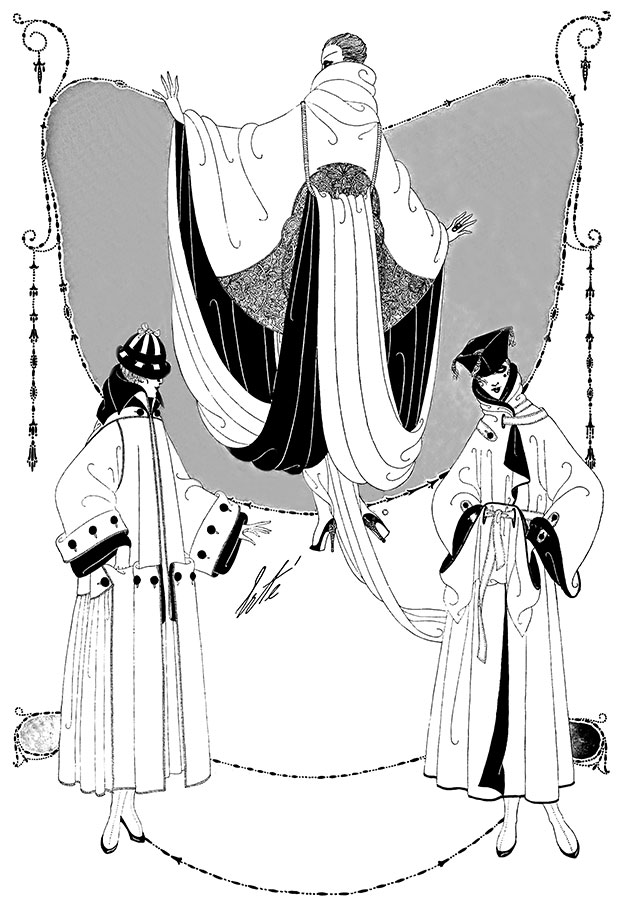 CENTER: EVENING WRAP, C.1917 Magnificent evening wrap of blue velvet embroidered in silver and faced with dark grey satin. The drapery is held be a large cord of silver which ties in the front. LEFT: WALKING COAT, C.1917 A fashionable walking coat of grey vicuna with knitted lining of taupe silk. All the edges are buttonholed with cerise wool. RIGHT: COAT, C.1917 What could be more desirable than a beige velour coat faced with blue velvet! Ribbons of chamois fasten the collar and cuffs, and form the sash. 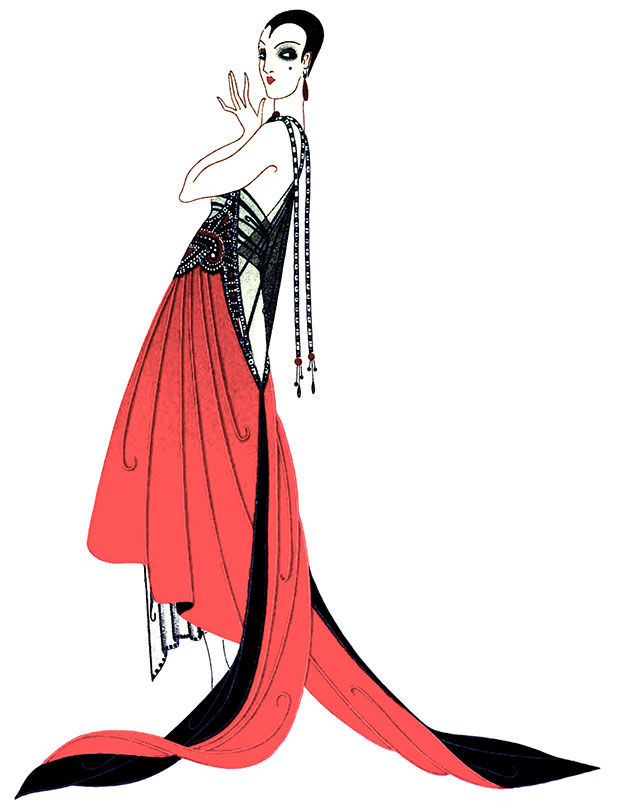 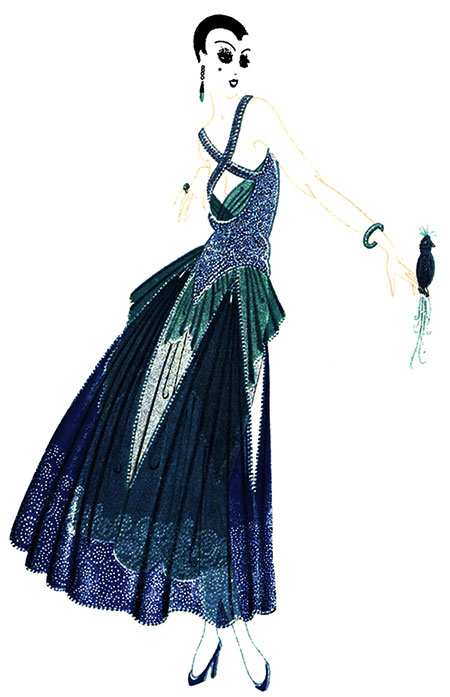 DANCING DRESS, C.1916 Extremely high backs or startling low fronts are distinguishing features of Erté designs. This dancing frock, all silver, green and blue, possesses the quality so typical of the artist. Drapery pointed down and an overskirt pointed up, hang over a short narrow petticoat of silver tissue. Earrings, bracelet, ring and bird are all part of the picture. 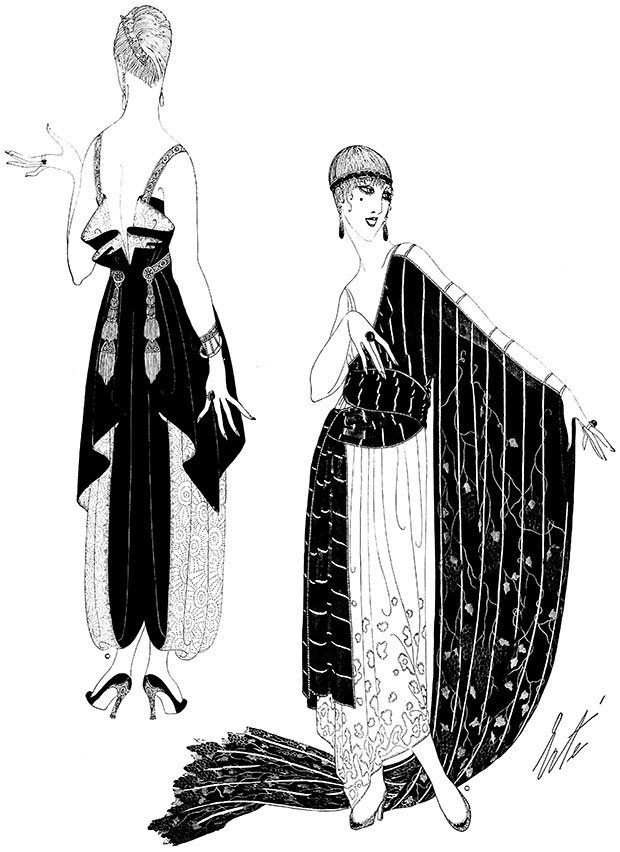 LEFT: EVENING GOWN The evening gown is dark green satin with a facing of grey and gold brocade. Shoulder straps, girdle and tassels are gold. RIGHT: EVENING GOWN The classic lines and decorative motif of this sumptuous evening gown are highlighted by a skirt of citron chiffon lightly embroidered with silver and an artistic train of blue chiffon embroidered in silver stripes, golden vines and grapes of uncut jet.