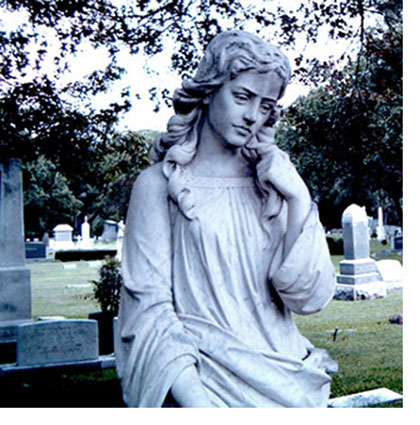 In the 1890s, the importance of proper mourning etiquette was unrelenting, with suitable clothing the primary concern. Mourning goods were manufactured to order and graded first, second and third; every sigh with its peculiar tint, until at last the world observed that the days of sadness were past by the disappearance of the color of black and its various shades and hues. There were recognized rules as to the length of time a relative mourned the death of a relation.

The correct time to mourn for a mother or father was not less than a year; where children were very devoted to their parents’ memory, eighteen months or two years was not considered a day too long, although a year was the generally accepted period.

When wearing mourning garb for a parent, the very shortest time was nine months; but this short period would be the visible acknowledgment of a lack of affection, almost amounting to indifference, on the part of the son or daughter observing it.

Widows did not, as a rule, mourn for less than two years; eighteen months or a year being unusual; but here, perhaps, more than in any other case of mourning, individual feeling reigned paramount. Nevertheless, some Victorian women, at the death of their husbands, often mourned and wore widows’ weeds to the end of their lives.

The same rule applied to widowers, their feelings alone would regulate the period of their mourning.

Fathers and mothers wore mourning for their children not less than a year, except in exceptional cases.

Wives usually mourned for their husbands’ relations as they would for their own, and husbands the same for relations of their wives, not often from affection, but because society expected it of them, and for the all-powerful reason that it would be a breach of etiquette not to do so.

Brothers and sisters wore mourning for each other at least nine months, very often a year, although some curtailed it to six months, but this was very unusual.

For uncles and aunts, six months, sometimes three, was the proper time to mourn.

For second cousins, and distant relations or connections, such as second cousins once removed, third cousins, etc., a month, or at the outside six weeks was the prescribed period, although three weeks would be sufficient, except when the relations, although only distant ones, were mourned from feelings of affection.

For a first cousin three months.

For a nephew or niece the same.

Mourning for sisters or brothers-in-law would be six months at the outside, three being the usual time.