Exploration of the Hersey Shop on the Hersey Family Farm in Hingham, Mass., has revealed a time capsule of the early and vibrant toymaking and coopering industry in New England. Hingham, Mass., known as “Bucket Town” due to its prominence in the early New England coopering industry, was also the home of the first and largest community of professional toymakers in America.  Vines that had covered the small building were stripped away in 2008 to reveal an intact coopering and toymaking shop resting on an 18-acre Colonial farmstead just outside of Boston, land that has been preserved by multiple generations of Hersey Family stewardship. 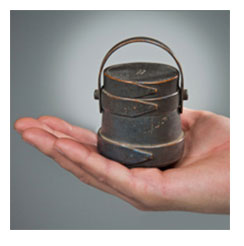 Old Sturbridge Village, working collaboratively with the Hersey Farm Collection, will host an exhibit entitled Bucket Town:  Four Centuries of Toymaking and Coopering in Hingham to showcase this collection for the first time in public.  Additional examples of handcrafted toys and woodenware from dozens of master coopers and toymakers from Hingham will also be on display.  The exhibit opens on June 21, 2014 and runs through January 18, 2015.  Coinciding with the exhibition, a book entitled “Bucket Town: Woodenware and Wooden Toys of Hingham, Massachusetts, 1635-1945”, will be published by The Hingham Historical Commission.

The Hersey Shop, used by generations of the Hersey family from the 1830s through the early 1900s, is the last furnished cooper’s shop standing in Hingham—and, more significantly, what is believed to be the earliest extant preindustrial toymaker’s shop in America.  Entering this time capsule, one is met with handcrafted toys, personal artifacts, and tools left as if the artisan had just stepped away from his workbench.  Today, descendant Peter Hersey is preserving the pastoral landscape and industrial legacy of his family by managing the small farm, which is the last remaining 18th century, privately owned farm in Hingham.

Bucket Town is part of the Four Centuries of Massachusetts Furniture collaboration, of which Old Sturbridge Village is a partner. More information on the exhibit is available at www.osv.org.