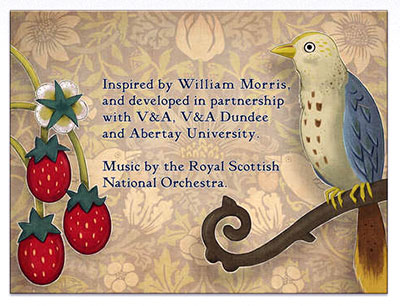 The V&A’s first ever Game Designer in Residence, Sophia George, launched a brand new iPad game inspired by the work of William Morris.

The new game takes its title, Strawberry Thief, from a William Morris furnishing fabric on display in the V&A’s Britain 1500-1900 galleries. The game enables the user to sketch and color the famous pattern by flying a bird – the strawberry thief itself – across their iPad screen.

As the player drags their finger across the screen, it leaves a trail for the bird to follow – and each section of the pattern it flies over then transforms from a pencil sketch to the colored pattern.

Animations and music from the Royal Scottish National Orchestra (RSNO) gradually bring Morris’ pattern to life in an experience designed for players of all ages. 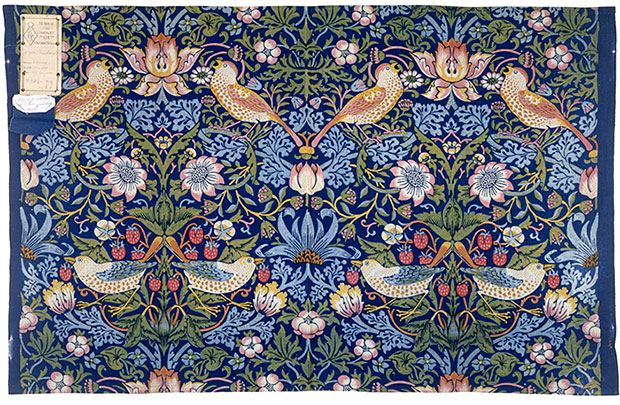 Sophia researched her game between October 2013 and March 2014 in the V&A, before returning to Abertay University to develop the game with Erin Michno from game studio Quartic Llama, Neil Cullen from RSNO and Abertay students Ellen Brown and Cameron Moore. 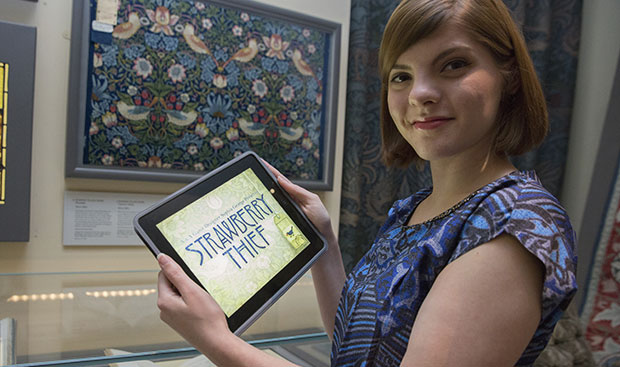 Sophia George said: “I’m delighted to be releasing my second game, Strawberry Thief, after a wonderful year working in the V&A and at Abertay University. It’s been an incredible opportunity to have access to the V&A collections, and to the game design experts at Abertay. With Strawberry Thief I wanted to show that games are an incredibly artistic, creative medium that can excite, inspire and even relax the player, quite unlike the stereotype of games just involving fast-paced violence. It’s also very important to me that families play games together, that games are designed for older people to engage with technology, and that girls and young women see game art, design and programming as real career options for them.” 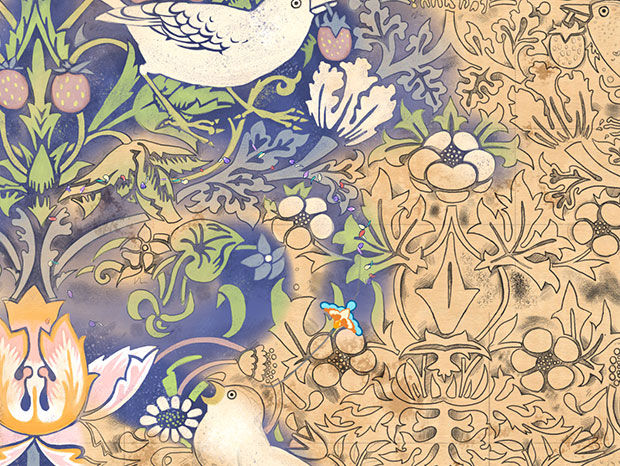 Sophia won a BAFTA Ones to Watch Award in 2012 for her first game, Tick Tock Toys, through Abertay University’s Dare to be Digital game design competition for students. 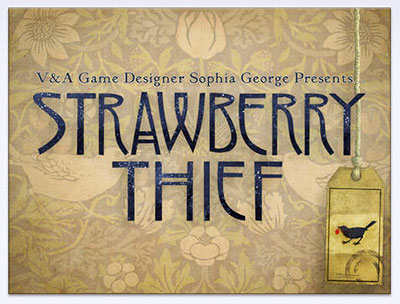 Her next project will see Sophia introducing game design to primary school pupils in Dundee, working with Dundee City Council and Abertay. She will introduce inspirations from her V&A research as the building blocks for game ideas – including the works of Margaret Macdonald, the wife of Charles Rennie Mackintosh, and her sister Frances.

Philip Long, Director of V&A Dundee, partners in the Residency, said: “It’s wonderful to see the way in which Sophia has responded to the V&A’s historic design holdings in creating her Strawberry Thief game. Taking inspiration from design of the past to produce new innovative design is at the heart of the V&A, so we are delighted to be working with such a rising star as Sophia George.” Professor Louis Natanson, Head of the School of Arts, Media and Computer Games at Abertay University, said: “Sophia is a very inspiring young designer, and Strawberry Thief gives us a glimpse of the potential for games to explore new ways of interpreting and exhibiting the work of famous artists. Working in partnership with V&A has allowed their expertise in art and design and our experience in game development to help create a beautiful new game.” 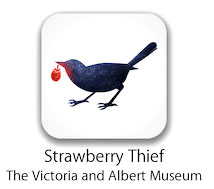 Strawberry Thief is available FREE from the App Store.