Two Ulysses S. Grant Chinese Porcelain Cup & Saucers: With his monogram within a laurel wreath. From a unique service of 360 pieces ordered in 1868. Used by the family in the White House. Estimate: $500-$800. [Image credit: Cotton Auctions, Lot #611]

Cottone’s Auctions will offer treasured pieces from Presidents and French Kings at their gallery at 120 Court Street in Geneseo, NY. Items descended in the family of General and former President Ulysses S. Grant, an 18kt gold presentation box purportedly given by France’s Louis XVI to Marquis de Lafayette, a gyratory kinetic sculpture by George Warren Rickey (Am., 1907-2002) and a watercolor painting by Charles Burchfield (Am., 1893-1967) will all come up for bid Feb. 20-21.

The auction comes with an impressive pedigree, featuring items from the collections of Walter Vogel of Rochester, N.Y., a pioneer collector and dealer; Richard F. Brush, also of Rochester, the founder of Sentry Safe; Richard Bright and Kyle Goodman of Corning, N.Y.; The Memorial Gallery of Rochester; The Strong Museum in Rochester; plus items from estates and individuals.

A favorite to take top lot honors is the Charles Ephraim Burchfield painting, a lovely 30 inch by 22 inch watercolor titled Dreaming of Christmas. The work, monogrammed lower right and artist-titled in pencil, is expected to hit $75,000-$100,000. It was originally purchased from the Kennedy Gallery (Buffalo, N.Y.) collection. Burchfield lived and worked in both Ohio and New York. His passionate and visionary landscapes influenced succeeding generations of artists. 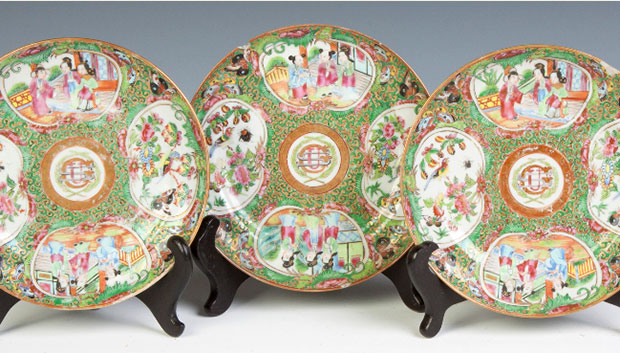 Three Ulysses S. Grant Chinese Porcelain Dessert Plates: With his monogram within a laurel wreath. From a unique service of 360 pieces ordered in 1868. Used by the family in the White House. Estimate: $500-$800. [Image credit: Cotton Auctions, Lot #614]

The items descended in the family of Ulysses S. Grant would stand on their own as desirable collectibles even if they weren’t linked to the Civil War general and president. One lot, a Rose Medallion punch bowl (est. $10,000-$15,000), shows Grant’s monogram within a laurel leaf and was part of a unique 360-pc. service ordered in 1868 and used by the Grants in the White House.

The fine and diminutive 18kt gold presentation box, made in Paris circa 1778, is believed to have been given by France’s King Louis XVI to Marquis de Lafayette celebrating the May feast at the Versailles Opera Theater. It was retailed by Charles-Raymond Granchez (Paris, France) and was descended in the family of Count de Linares, son of Queen Maria Luisa (est. $10,000-$15,000).

An oil on canvas rendering of a mother and daughters in springtime by the Irish-born American and Canadian artist William John Hennessy (1839-1917) carries a pre-sale estimate of $15,000-$25,000. The 30 inch by 54 inch work is signed lower left. Hennessy was a versatile landscape artist, genre painter and illustrator who was also active in the Young Ireland movement of 1848. 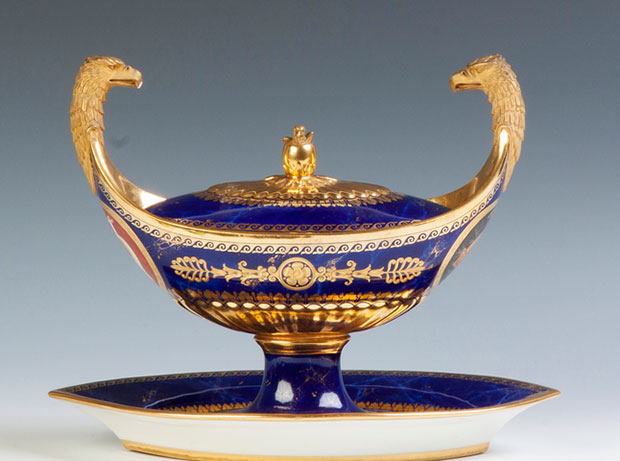 A Sevres cobalt and gold enameled tureen (circa 1812) is descended in the family of William Weightman, who used it in his house in Mount Airy, outside Philadelphia, where he entertained lavishly. Upon his death the house was given to the Catholic Church, which converted it into a girl’s school. The tureen has a conservative estimate of $5,000-$8,000. Also sold will be a late 19th century Bakhtiari rug with overall pattern, pulled from a Pennsylvania estate and measuring 17 feet 2 inches by 16 feet 11 inches. The rug is estimated to change hands for $15,000-$25,000.

They’re just a few of the expected top lots in a two-day Fine Art & Antiques Auction being held by Cottone Auctions, in the firm’s gallery, located at 120 Court Street in Geneseo. In all, about 750 lots will come under the gavel at Cottone’s first big auction event of 2015. Start time for the Friday, Feb. 20 session (323 lots) will be 12 noon Eastern time, 11 a.m. for the Feb. 21 session.