The first ski holidays began in the mid-1800s, with the British upper classes quickly adopting the sport as one of winter’s most fashionable pursuits. In 1905, the sport made a tentative Olympic debut as an ‘unrecognized’ event and by 1914, Swiss resorts provided 215,000 beds for eager ski tourists. With this stylish skiing set came a growing demand for well-designed, luxury accommodation. Chalet design developed as a field in its own right, with challenging environmental conditions pushing architects and interior designers towards increasingly innovative structures. 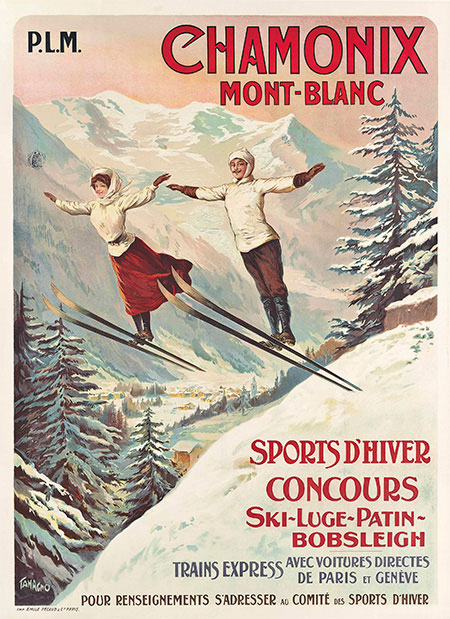 LITHOGRAPH IN COLOURS, C1900 – Francisco Tamagno (1851-1933), Chamonix Mont-Blanc. Printed by Émile Pécaud & Cie., Paris. [Image: www.christies.com] At the beginning of the 20th century, ski resorts such as Chamonix had begun to attract an increasingly fashionable clientele. As the figures in this lithograph by Francisco Tamagno show, white bonnets were considered particularly chic — with flowing skirts proving no hindrance to ambitious jumps.

On January 22, 2015 Christie’s South Kensington will host its highly anticipated 17th annual Ski Sale, the only auction of its kind worldwide. Every January, at “The Ski Sale” at Christie’s presents enthusiasts of the world’s foremost winter sport with an extensive selection of vintage posters depicting the action on the slopes and the stunning mountain scenery, capturing an era of glamour. This year the sale features an impressive group of ski posters from Switzerland as well as popular and rare posters from France, Italy, Austria, Germany, Norway and Australia, with a section dedicated to US and Canadian resorts. These iconic posters are offered alongside 25 lots of vintage Vuitton travel luggage.

PAIR OF MONOGRAM CANVAS DESK TRUNKS, LOUIS VUITTON, FIRST HALF OF THE 20TH CENTURY – Both vintage Vuitton luggage is composite leather and brass bound with leather handles to either side, one with the monogram ‘JDER’ the other with ‘D.C.S ST PAUL MINN USA’, both mounted on casters, both with hinged lid and front opening panel to reveal three large and two small drawers, a removable webbed basket, a pull out black wooden desk flap and the top with two lidded compartments, the padded lids studded with ribbon taping. Both 38½ x 22 x 20½ in. (98 x 56 x 52 cm.). The lock of the trunk with the monogram ‘JDER’ numbered ‘064378’ the other numbered ‘061511’. [Image: www.christies.com]

Whilst ski posters depict the romance of travel, the auction also offers today’s discerning traveler a selection of stylish vintage Louis Vuitton luggage. Renowned across the world for their iconic monogramed trunks, holdalls and bags, Louis Vuitton epitomizes luxury travel and highlights in the sale include a magnificent pair of desk trunks (estimate: £50,000-80,000, illustrated above. 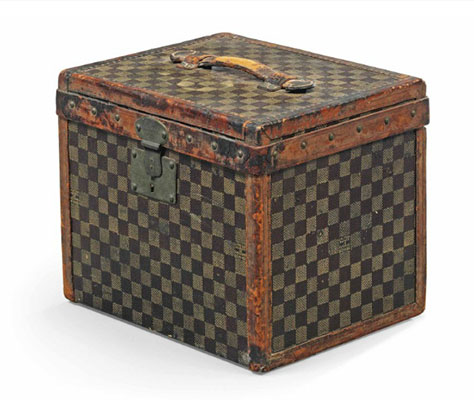 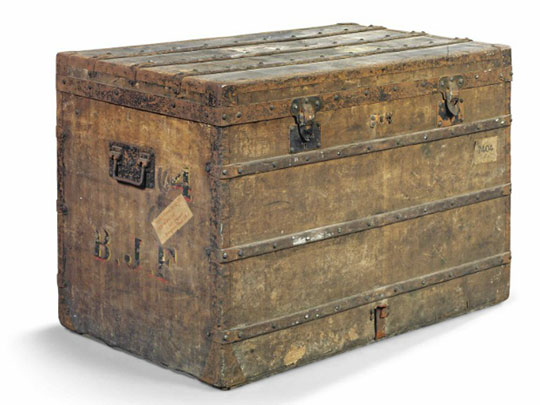 LADY’S HIGH TRUNK IN STRIPED CANVAS. LOUIS VUITTON, LATE 19TH CENTURY – Vintage Vuitton luggage is bound in metal, with metal handles, the monogram ‘B.J.F’ and the number 4 to either end, with fitting for a leather strap, mounted on casters, the interior lined in cream and red striped paper and canvas, with three removable trays each with three canvas cross straps, the padded lid studded with purple ribbon taping. 27¼ x 39¾ x 23¼ in. (70 x 101 x 59 cm.) The interior label numbered ‘10727’. [Image: www.christies.com]

Switzerland was the most prolific country for ski tourism posters during the 20th century and amongst the first to establish ski resorts, which remain popular to this day. The 2014/15 winter sees Switzerland celebrate 150 years of winter tourism: St. Mortiz and Davos welcomed their first guests in 1864 and 1865 respectively. 2015 also marks the 150th anniversary of the first Matterhorn ascent, which the village of Zermatt will celebrate with events and festivities. The Ski Sale comprises a fantastic group of 20th century posters advertising Swiss resorts, including St. Moritz, Davos, Zermatt, Gstaad and Verbier. Highlights are Carl Moos’ St Moritz (estimate: £18,000-22,000); a 1918 poster for Davos by Emil Cardinaux (estimate: £12,000-18,000); and a group of Zermatt posters depicting the iconic mountain, such as a 1947 lithograph in colors designed by Schol (estimate: £4,000-6,000).