Kent collection offers a half century snapshot of the automotive industry with over 1,000 lots of Veteran, Edwardian and Vintage Motor Cars, Historic Commercial Vehicles, and Automobilia, all to be put to the hammer on the 13th and 14th June on location in Staplehurst, Kent. Colorful online catalog will give you a glimpse of the fabulous vintage vehicles.

Some of the domestic vintage vehicle highlights include: 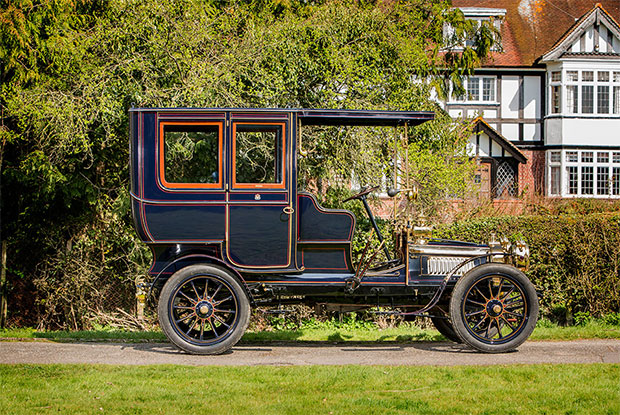 In 1959, Michael Banfield bought his first classic car, a 1927 Bentley. Continuing with this passion, his collection grew, today amounting to over 1,000 items, from legendary classic cars, to buses, fire trucks, and an eclectic array of automotive memorabilia.

Malcolm Barber, Bonhams Co-Chairman, said, “Michael was a close friend and an avid automotive enthusiast with a passion for preservation. For more than 50 years he dedicated himself to the promotion and use of historic road transport as part of our national heritage. The sale of his life’s collection is a truly special occasion, celebrating his life and focus on all things automotive, stretching back through decades of motoring history.

Wonderful online catalogue with color photos of Edwardian and vintage motor cars, historic commercial vehicles, and automobilia can be found at www.bonhams.com/auctions/22201.

“The collection is notably varied; from a classic 1904 Mors Roi des Belges car, to a 1922 AEC S-Type open-top double-deck bus, finally followed by wonderfully preserved automobilia  the entire collection of over 1,000 lots all owned by one man is truly wonderful.

“This automotive sale is particularly poignant as we continue to commemorate the one hundredth anniversary year of the outbreak of World War One. In 2014, the pre-First World War cars are clearly very special, signifying a glorious moment in automotive history, as fascinating motoring bodies that have stood the test of time.”

At the pinnacle of veteran motoring, the 1904 Mors Roi des Belges was a natural to participate in the London to Brighton Run. Estimated at £500,000 – £600,000, this particular 24/32-hp “English License” Mors was discovered in 1938 by Harold Arthur Pierpoint, who entered it for the commemoration Run later that year.

The Mors was built by a firm that had more than earned its laurels in the epic city-to-city races of the early 20th Century. A large five-seater Brighton car, it has the capability of carrying seven people, utilising the rear-facing upholstered bench seats. Michael often took friends and notable VIP’s on the London to Brighton Run in this car, many of whom will regale at his hospitality and the driving experience.

A car with a significant history, the Mors was one of the first 100 veterans to be officially dated by the Veteran Car Club when the process was instigated after the War, and was awarded Certificate No 99. After the Armistice, it went on to appear at the VCC’s September 29 rally, and later to successfully finish the first postwar Brighton Run in 1946.

Acquired by Michael Banfield in 1975, the outstandingly handsome veteran Mors is ready to take to the Brighton Road as reliably as it has done for the past three-quarters of a century  after the hammer falls at the upcoming sale!

Talbot’s were high quality vehicles, with this 12/16-hp version no exception. With an impressive Brougham body and restored to an extremely high standard, the Royal Blue Talbot bears the crest of the Worshipful Company of Carmen  of which Michael Banfield was an active Liveryman  on the rear doors. Like several of the cars in the Michael Banfield Collection, the Talbot was ceremoniously “branded” by the Master of the Carmen in the annual Cart-Marking Ceremony at Guildhall in 2005.

“For all his efforts Michael was made an Honorary Life President of the VCC and was given a Lifetime achievement award by the Transport Trust in 2007. Furthermore he was made a Freeman of the City of London in 1998 and became a Liveryman of the Worshipful Company of Carmen in 2001.

“I’m delighted that Bonhams is able to be a part of this truly unique sale, as one of the largest single-owner classic car and memorabilia sales the United Kingdom has seen in many years.”

Wonderful online catalogue with color photos of Edwardian and vintage motor cars, historic commercial vehicles, and automobilia can be found at www.bonhams.com/auctions/22201.

Bonhams, founded in 1793, is one of the world’s largest auctioneers of fine art and antiques. Today, Bonhams offers more sales than any of its rivals, through two major salerooms in London: New Bond Street and Knightsbridge; and a further three in the UK regions and Scotland. Sales are also held in San Francisco, Los Angeles, Carmel, New York and Connecticut in the USA; and Germany, France, Monaco, Hong Kong and Australia. For a full listing of upcoming sales, plus details of Bonhams specialist departments go to www.bonhams.com