One of America’s most celebrated artists, Louis Comfort Tiffany worked in nearly all media available to artists and designers in the late 19th and early 20th-centuries—glass, ceramic, metalwork, jewelry, painting, furniture, and interiors. He earned international acclaim for his artistic output, receiving prestigious awards in exhibitions in Europe and the United States. His work was enthusiastically acquired by art museums throughout his lifetime and continues to be highly sought after today. 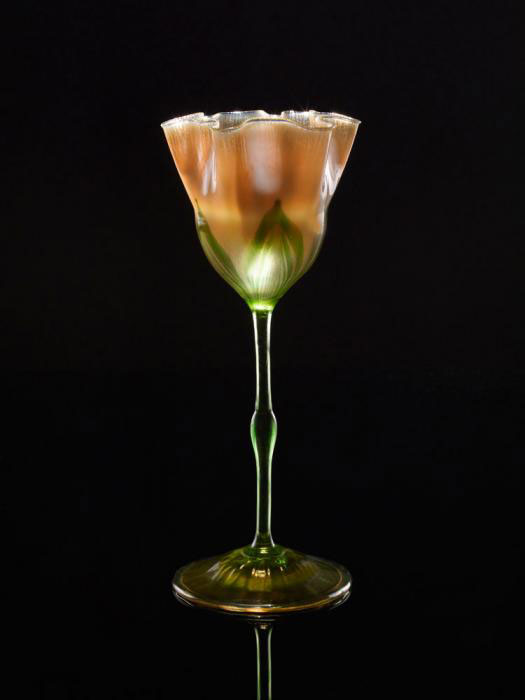 In September 2013, the Richard H. Driehaus Museum debuted its inaugural exhibition, Louis Comfort Tiffany: Treasures from the Driehaus Collection. In response to its overwhelming success and by popular demand, the Driehaus Museum has extended the exhibition through January 4, 2015! More than sixty objects, including four new stained-glass lamps, are on view in a magnificent historic setting, representing this extraordinary artist’s work over his prolific 50-year career with the Tiffany Glass & Decorating Company and Tiffany Studios, among his many other interrelated firms. The exhibition also introduces audiences to Tiffany artworks from the distinguished Driehaus Collection, representing the unique collecting vision of Chicago philanthropist Richard H. Driehaus over the course of several decades. 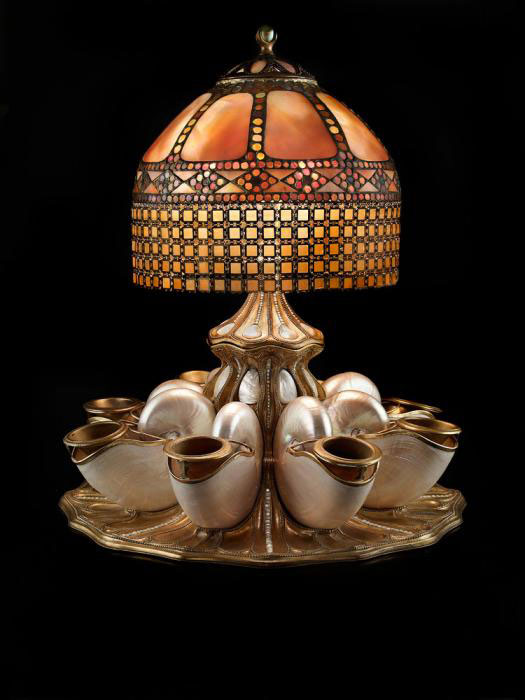 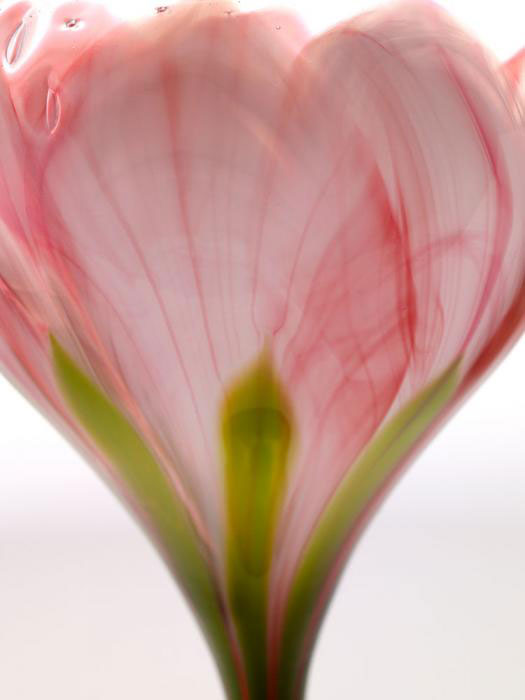 Situated in the fully restored Gilded Age mansion designed by the architectural firm of Burling & Whitehouse in 1879 for prominent Chicago banker Samuel M. Nickerson, Tiffany’s masterpieces are placed within the larger context of late 19th-century interiors. The exhibition includes outstanding examples of Tiffany lamps, Favrile glass, stained-glass windows, ceramics, metalwork, and furniture from the Driehaus Collection, displayed together publicly for the first time. 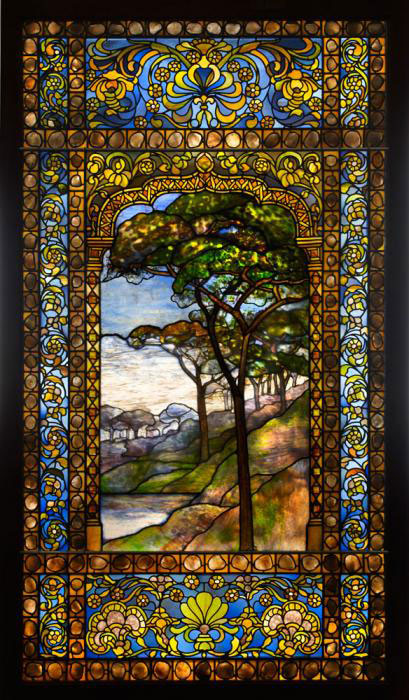 Louis Comfort Tiffany was born in New York City on February 18, 1848, to Harriet Olivia Young and Charles Lewis Tiffany, the founder of Tiffany & Co. Rather than joining the family business, Tiffany began his career as a painter, studying at the National Academy of Design from 1866–67 and, in the following year, with the French painter Léon-Charles Adrien Bailly in Paris. He travelled throughout Europe and North Africa, sketching the exotic landscapes and architecture and translating them into early oils and watercolors.

Tiffany’s next major venture was as a prominent decorator in Gilded Age New York. In 1881 he merged several interior design partnerships to create Louis C. Tiffany and Company, Associated Artists, which would decorate the Veteran’s Room of the Seventh Regiment Armory in New York that year, and the Red Room of the White House the next. 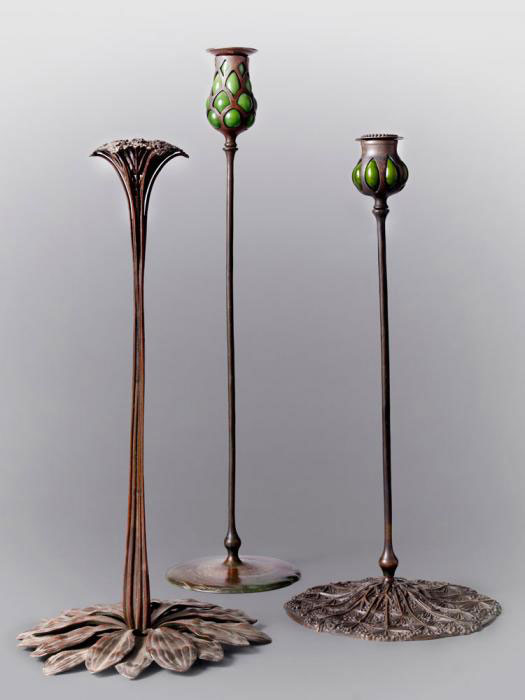 By the 1870s Tiffany had already begun experimenting with new glass forms and techniques. In late 1892, he built his own glasshouse in Corona, Queens, New York, hiring the skilled émigré artisan and designer Arthur J. Nash to oversee the factory, which produced Favrile and other unique varieties of glass to be used in ecclesiastical and secular stained-glass windows, lamps, vases, mosaics, and accessories. 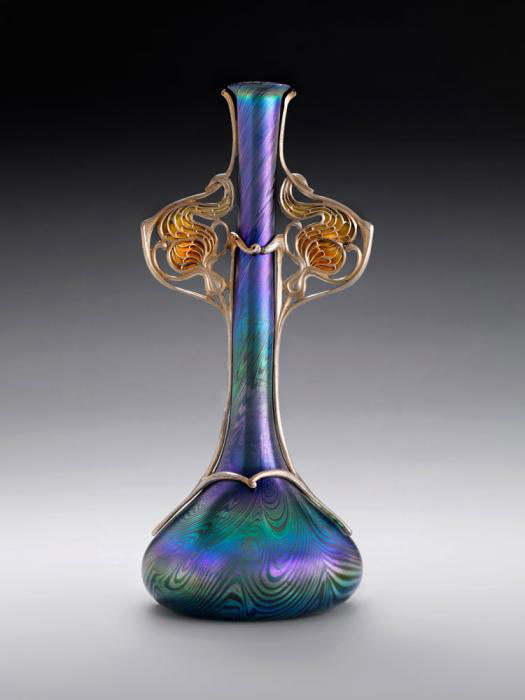 One of the most notable exhibitions of Tiffany’s career took place in Chicago: the Tiffany Chapel at the World’s Columbian Exposition in 1892–93. The Romanesque Revival chapel, which occupied space within Tiffany & Co.’s exhibit, included stained-glass windows, an elaborate chandelier, and extensive Byzantine-style mosaics. Tiffany’s great success at the Columbian Exposition earned him 54 medals and a number of important commissions, including, in the Chicago region, the Chicago Public Library and the Field Memorial Gallery in the Art Institute of Chicago.

While the magnificence and exceptional quality of Tiffany glass made this medium the most significant of his career, he continued to innovate, expanding his operations into enamels, pottery, and jewelry. In 1902 his father died, and Tiffany became the art director of Tiffany & Co.   Information about Louis Comfort Tiffany: Treasures from the Driehaus Collection, including a gallery of elected highlights, can be accessed at the Driehaus Museum.