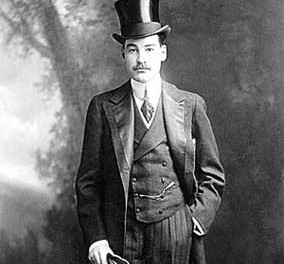 Throughout the 19th century, men wore top hats for business, pleasure and formal occasions (pearl gray for daytime, black for day or night) making its wearer feel taller, handsomer and suave. By 1900 top hats were made with silk and worn only for special occasions, such as weddings and dances. However, there was a great top hat resurgence in the 1930s when Fred Astaire, Gary Cooper and others, brought it back in favor with motion pictures. Even into the 1960s, men still wore a hat for every outdoor excursion. Did you know that one of the Smithsonian Institution’s most treasured icons is Abraham Lincoln’s silk stove pipe top hat worn on the night of his assassination?  As a lawyer, he was known to tuck important papers, court notes, and contracts in his tall, worn top hat. On the other hand, President Richard M. Nixon was the last President to be inaugurated wearing a top hat, and a hat of any kind.