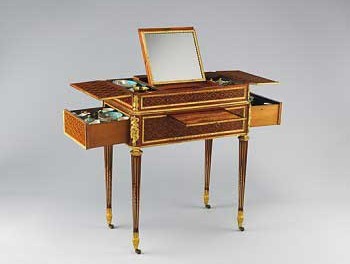 Metropolitan Vanities: The History of the Dressing Table at The Metropolitan Museum of Art will explore the evolution of the modern dressing table. Few pieces of furniture have revealed more about social customs, leisure-time pursuits, and popular tastes throughout history. The form of the dressing table—or vanity, as we know it today—began to develop in the late 17th century in Europe. The exhibition will consist of outstanding examples of this furniture form and some 50 related objects, paintings, and drawings selected mainly from the Metropolitan’s collection. Ancient Egyptian decorative boxes used to hold cosmetics, classical Greek and Roman scent bottles, medieval mirror cases, 18th-century nécessaires, and innovative contemporary jewelry and accessories will be on display. 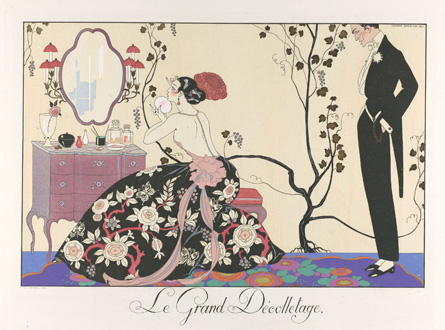 In the late 17th century, European high society began commissioning luxurious specialized furniture from craftsmen and furniture makers. The poudreuse in France, and the low boy, Beau Brummel, and shaving table in England served as models for the dressing table. Jean-Henri Riesener’s Mechanical Table (1780–81) is one of the finest examples of this period in the exhibition. This table, in which the top slides back as the drawer slides forward to reveal a toilette mirror flanked by two compartments, was delivered by the cabinetmaker to Queen Marie Antoinette at Versailles in January 1781. 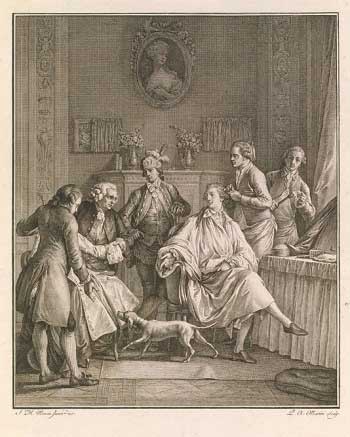 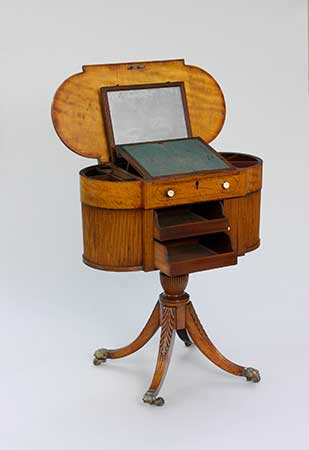 This American worktable was made of satinwood and served as a sewing table and writing desk as well as a vanity. (New York: Metropolitan Museum of Art)

It was not until the early part of the 20th century, during the Art Deco period in both Europe and America, that luxurious dressing tables came to epitomize the modern concept of glamour and luxury. Hollywood films of the 1920s and ’30s, with their fantasy world of penthouses atop Manhattan skyscrapers, were hugely popular during this period and often depicted the femme fatale heroine sitting at her supremely elegant vanity table in the bedroom or dressing room. Norman Bel Geddes’s enamel and chrome-plated steel dressing table (1932) is a model for this streamlined and sophisticated style.

More recently, designs for the dressing table have reflected the diversity of new styles, from the modern molded-plastic valet dressing cabinet of Raymond Loewy (1969) to a post-modernist Plaza dressing table and stool by Michael Graves (1981) and a minimalist dressing table of today by the Korean contemporary designer Choi Byung Hoon (2013).