How to Host a Victorian Tea Party

Bringing back an elegant pastime -- the Victorian afternoon tea.

An afternoon tea or Victorian tea party may be one of the most delightful and informal affairs in the whole social round or it may be an unmitigated bore. It all depends upon the hostess. If she is a wise woman she will limit her guests to the afternoon tea to the number her house can accommodate with ease, and have her hours long enough to avoid all coming at the same time; she will have some regard to making her guests to her afternoon tea acquainted if they have not already met; and she will furnish forth her tea table so invitingly that those who come perfunctorily will remain to chat over the teacups, and pay her the compliment of forgetting the time of day.

On a cold winter's afternoon a bright open fire is one of the things to have at a truly Victorian tea party. Near enough to the fire to look cozy should stand the prettiest of afternoon tea tables; not one of the small affairs which will hold only a half-dozen cups, but a good-sized one capable of practical service.

In the center should be a bowl of flowers and about it two candelabra or several individual candlesticks with or without candleshades. Scattered between will be room for plates of sandwiches, cakes, bonbons, and salted nuts or crystallized fruits, while at one side the tea or coffee urn may stand, or the chocolate pot, and at the other side may be a large punch bowl of lemonade or tea punch.

Of course the quantity and variety of the refreshments at a Victorian tea party must depend on the size of the gathering. If only a dozen or two are invited, then the simpler things are the better, but if the afternoon tea is really a function, then something more elaborate is in keeping.  If one plans to have tea, chocolate, and lemonade for beverages, she must consider how most easily she can handle them. Tea made with a kettle of boiling water and a tea-ball is all very well for three or four persons, but one cannot serve more at a large afternoon tea without a delay while the water slowly comes to the boiling-point.

How to Host a Victorian Tea Party

The urn is the best thing to use for a large number of guests at an afternoon tea. Have the tea made in the kitchen and carefully strained; then put it in the urn and light the lamp and it will keep fresh for hours. Serve your refreshments in an antique tea service , such as this rare Tiffany & Company tea service, for a truly Victorian tea party. Other silver serving pieces in a more affordable range can be found in local antique stores.

Have cream, sugar, and sliced lemons on the table, and, if you fancy a novelty, try putting two cloves in each cup and pouring the hot tea upon them, removing them before passing the cup. Coffee and bouillon should be served from an urn, and the cups used for either of these, and for tea as well, should be the small flaring teacups, not after-dinner coffee cups.

If you are so fortunate as to own a Russian samovar, and it certainly gives the best tea in the world for a Victorian tea party, do not use cups at all, but tall, slender glasses, passed on small plates, and put a slice of lemon in each glass.

Antique chocolate pots resemble vases or urns, and the cups which are used with them flare at the top somewhat as the teacups do. Of course when chocolate is offered at an afternoon tea, whipped cream is put on it when it is served.

When the lemonade is made, shredded oranges, bananas, and pineapple may be used, but it is to be strained before it is put in the bowl, and a few maraschino or preserved cherries added. A small ladle is used for filling the glass cups which invariably accompany a punch bowl. Tea punch is made by using hot tea instead of water for lemonade, adding the fruits as before, but putting it, when ice cold, into a glass pitcher instead of a bowl, and placing a large bunch of sugared mint in the mouth.

Café frappé is strong coffee, well sweetened, and with a good deal of cream which is frozen to the consistency of wet snow. It is served from the bowl in glasses at a simple Victorian tea party.

The sandwiches offered at afternoon teas are of infinite variety; sometimes they are filled with a salad mixture, sometimes with a sweet, and often with some sort of nuts with cream or fruit. They are cut in circles or triangles or hearts, or else rolled. To make salad sandwiches, chop and pound chicken or turkey to a paste, and mix with mayonnaise, or spread crisp lettuce leaves with mayonnaise and put between the slices. Olives, chopped very fine, make an excellent salad sandwich, either plain or, like the others, with a dressing. Delicious sandwiches are made by using the very thinnest possible shavings of lemon, and cucumbers with French dressing are also appetizing, provided not too much of the rather strongly flavored vegetable is used.

Sweet sandwiches for an afternoon tea are made of orange marmalade or pear conserve, which is a rich jam with considerable ginger cooked in it. Jelly is sometimes used, but it is not sufficiently stiff to be practical; jam or marmalade is far better. Peach or apricot is most delicate; red raspberry is occasionally seen, but the seeds are decidedly objectionable. Besides these two kinds of sandwiches there are many prepared with nuts which are also very nice for a Victorian tea party. Boston brown bread two days old, cut very thin, spread first with a little butter and then with cream cheese mixed with chopped peanuts is one of the best of sandwiches, but care must be taken not to have the bread damp or soggy. Whole wheat bread may be prepared with this same filling. Raisins and chopped English walnuts are nice, and so are chopped dates and almonds together. Often whipped cream is used with those nut fillings, to bind them.

The cake served at an afternoon tea should always be of the lightest sort. It is never wise to offer any sort of layer or fruit cake, or anything which is sticky. There are all kinds of wafers and nut strips which are easily prepared at home which are delicious, and certainly far more tempting than the ordinary things bought from the baker. A variety of choices will make a successful Victorian tea party.

Strips of puff paste may be covered with chopped almonds mixed with the slightly beaten white of one egg, and just browned in the oven; lady-fingers may be rolled in boiled frosting and allowed to dry; saltines may be covered with sweet melted chocolate, with a very little butter mixed in.

Little cakes may be made in small baking-dishes, the smaller the better, and rolled in boiled icing colored and flavored with orange, rose, lemon, or pistachio, and these may be ornamented, if desired, with tiny strips of angelica, or bits of candied cherries or nuts cut in lengths.

Ice cream sandwiches are new at an afternoon tea, but many are afraid to attempt them, as they seem difficult to manage; they are very simple, on the contrary. Get white ice cream in bricks, as firmly packed as possible, and slice it on a marble slab; then with a round biscuit cutter cut out circles from the slices, and put them between macaroons. Or cut the slices in strips of the right size to fit between two sugar wafers. Serve these sandwiches on small plates with forks for a fun treat at a Victorian tea party for children.

The bonbons used at afternoon teas may be all chocolates, or else peppermints or creams, matching the flowers in color, or they may be delicious confections in paper cases, such as marrons glacés or strips of orange and lemon candied. In any case they should be something dainty, and, if possible, something not seen on every table. If salted nuts are used, try having pecans instead of almonds, and mix a few green pistachio nuts with them; the contrast is pretty, and almonds have been used so long as to be tiresome. 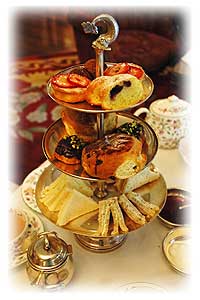 Sometimes an afternoon tea is really an elaborate reception more than a Victorian tea party; in that case it is almost essential to have a caterer, for the decorations and refreshments are too troublesome for the ordinary hostess to prepare. There must be flowers and light in profusion, a table loaded with delicacies, and many waiters to serve. There is usually a first course of bouillon, followed by something in the way of shell-fish, perhaps creamed oysters or lobster, with sandwiches; after that is a salad, chicken, or shrimp, and then ices in forms, fancy cakes, bonbons, and coffee, lemonade, or punch. The table at an afternoon tea has a centerpiece of roses and ferns, candles in silver candelabra, set pieces of spun sugar with fruits and sweets; and sometimes arrangements of whipped cream in colored sugar shapes.

Tea drinkers at the 1894 World’s Columbian Exposition in Chicago had a chance to revel in their favorite beverage as never before. In the fair’s tiny Japanese tea garden, that was like a bit out of another world, visitors thronged all day long with people who drank tea all their lives and who stopped for a fleeting moment to enjoy an afternoon tea. On the porch of the ceremonial tea house in the Japanese Tea Garden they were always making tea, and such strong, rich, fragrant tea it was, too. The visitor sat on a brightly colored soft cushion and sipped tea and nibbled on the sugar cakes which accompanied it. Afterward went peering around in the tiny rooms of the doll house that the tea people called home. Today, California possesses one of the most unique bits of landscape gardening in America — a miniature Japanese tea garden, faithfully reproduced in the prettiest portion of the Golden Gate Park, San Francisco. 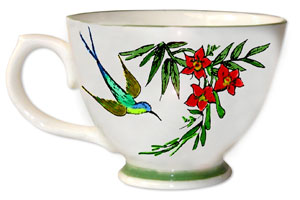 How to Make a Victorian Tea Set

Hand-painting china was an easy and popular pastime for ladies during the Victorian era. An admired project was decorating white china tea and dessert sets with floral motifs. See how to make a Victorian tea set with original Victorian designs and instructions for a teacup, saucer, and dessert plate featuring a colorful floral pattern and a hummingbird. Create a set for entertaining Victorian style.