Its cold outside but you can still have fun. How did people amuse themselves during a cold winter a hundred years ago?  In the 19th century, people looking for fun did many of the same outdoor activities as we do today… skating, tobogganing, snowball fights and more. The cheery jingling of sleigh-bells, the shouts of tobogganers, the smile on every face, the friendly grasping of hands, and the general air of holiday-making was a pleasant escape from everyday life.

There has always been a fatal fascination about “sliding down-hill” — it is easier to descend than to climb — thus we have the toboggan parties. Snowshoe steeple chasing, curling, and hockey matches were also attempted at some of the more ambitious toboggan parties, but it was generally considered enough to invite your friends to come heavily wrapped in flannels and to give them a sled ride downhill (an artificial hill was constructed if one was not at hand) on a three-cornered toboggan, which was just dangerous enough to be delightful to those who liked to run risks. For toboggan parties, ladies would be warmly and snugly dressed in fur gloves, Balmoral stockings, fur-lined boots, warm little woolen “Tam o’ Shanter” cap, all fastened on securely. These winter sports and enjoyments forbade any frills and the female dress was reduced to masculine simplicity. After the toboggan riding was over, the group was asked in to supper and a hot and grateful cup of bouillon, some oysters, terrapin stew, punch, champagne, and always a cup of Russian tea was offered.

One of the greatest attractions for winter fun in the mid-to late 19th century was ice skating. The French even built the Palais de Glace, the first Parisian skating rink with artificial ice. Among the favorite winter pastimes of the masses in New York, ice skating took high rank. At a season of the year when almost all outdoor recreations were interrupted, ice skating came to the rescue. In New York City, the lakes in Central, Van Cortlandt and Prospect Parks were thrown open to the public free of charge and spacious temporary structures were erected for the sale of refreshments, the renting of skates, and for resting and viewing the winter sport. The St. Nicholas Skating Club had a big rink on W. 66th St. near Central Park for ice skating the year round and there was also a public rink—the Ice Skating Palace—at Lexington Ave. At times, a fancy dress masquerade carnival on the ice was planned and carried out with great success. Illuminated by torch light, the frozen lake would become a ballroom. Current women’s fashions were adapted to allow for the safety of skating – but not by much. Skating costumes replicated the restricted clothing of the period – confining bodices, tight waistbands, draped skirts and even the unmistakable bustle. According to Hall’s Journal of Health, skating rules dictated that it was not the object so much to skate fast, as to skate gracefully … and it would be a “safe rule for no child or lady to be on skates longer than an hour at a time.” 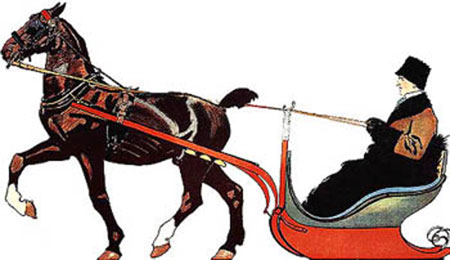 To many, the idyllic winter fête was sleighing in Central Park, which was indeed carnivalesque like the ice carnivals popular in 19th century Montreal. A kaleidoscope of beautiful colorful sleighs were pulled by tasseled horses with riders covered in robes lined with bright colors creating a picturesque scene often reproduced today on holiday cards. Queen Victoria had a favorite sleigh, one reminiscent of fairy tales. The royal sleigh, built by the carriage-makers Hooper & Co. was painted red and gold, and lined with red velvet.  According to contemporary newspaper accounts, Prince Albert drove the sleigh, which was pulled by a pair of horses with harnesses decorated with ostrich plumes and silver bells. 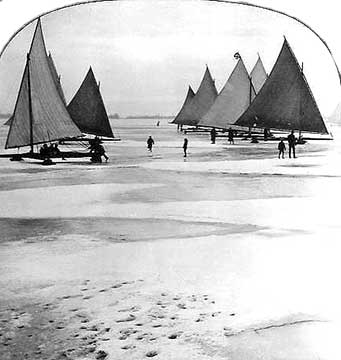 The ice boat became an extravagant plaything of the wealthy residents of the luxurious estates on the upper Hudson. To take a journey on this fairy-like craft was to reach the highest rate of speed with the minimum of resistance which produced the maximum of excitement. It was more like flying than any other amusement. The boat had a sail, and when this was loosened the iron keel cut the ice with a grating sound, and off at a speed of seventy miles an hour the adventurous voyager flew over the solid ice of the Hudson. Occasionally the yachts capsized, sending the occupants across the ice but there were usually a fleet of fellow ice yachts nearby and men with fast horses and sleighs along the banks to pick up the spilled people.