No holiday in all the year is so merry, informal, and as marked by fun as Halloween. This is the night when fairies dance, ghosts are abroad, and witches are in power. It is the night when charms, spells, and incantations are invoked to read the veiled future by both young and old. Halloween ghosts have the reputation of being cheerfully minded spooks — and so the spirit of fun reigns supreme.

This year, put aside the elaborate superhero costumes, video games, and fast food — have some old-fashioned Halloween fun with an assortment of ideas from 100 year old magazines filled with Halloween decorating ideas, yummy menus, and wholesome games. 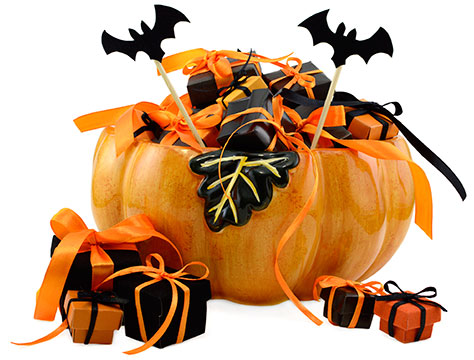 The center of attraction at most Halloween parties is the table — the centerpiece can be an enormous pumpkin with a row of candles in the top, where it has been cut almost in halves to form a basket with a cleverly cut handle, which can be twined with vines. The center should contain a bunch of grapes for each person, to which is tied a party favor symbolic of the guest’s future life, such as a coin for wealth, a pen for a literary career, thimble for spinster, a button for a bachelor, etc.

Over the table, mingled with ferns, leaves and vines, scatter spiders, toads, glittering silver snakes, owls, and cats. These objects are really a great attraction as the candle light shines upon them. Other great decorative possibilities are squash, cucumbers, gourds, carrots, and pumpkins — they make unique candle sticks and carved lanterns.   MORE HALLOWEEN DECORATING IDEAS >> 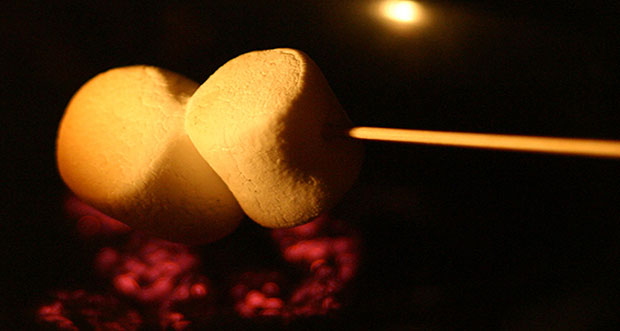 There are so many old-fashioned ways to amuse guests, so many schemes to try, that one evening is far too short to do them all, so the hostess must adapt what is best suited to her own company. Centuries ago it was customary to build huge bonfires on the hills to proclaim that majestic and sacred rites were being performed, and it was a season of great rejoicing; so a roaring outdoor fire to roast marshmallows is a fun addition to a Halloween party.   OLD-FASHIONED HALLOWEEN PARTY IDEAS >>

Of course, Jack-o-Lanterns must glow from every available corner, from mantel and bookcase; in fact, every spot capable of holding it should bear a grinning “Jack.”

Have popcorn to be popped by the guests, dishes filled with red apples, and bowls of nuts to crack. On this one night Fate gives an opportunity to peer into the future and divine the course of true love. Tassels from corn ears are named by the young single ladies, then placed over the door, and the man first to pass under the one bearing his name is supposed to be the life partner of the girl who named it.   JACK-O-LANTERN PARTY FOR KIDS >>

Bobbing for apples is a stunt so old that no one seems able to tell its origin, but no Halloween party is complete without it. Fill a small tub with water, put in eight or ten apples, first having inserted in one of them a ring, in another a thimble, in a third a coin, and in one a button. Consequently, the fate of four persons will be decided on the spot.

The “candle” fortune is always popular. Place lighted candles in an open window, and the one which burns the longest is the one who will remain faithful to the end; of course the candles are silently named before being lit.

A great “mystery” cake is served at midnight; inside the cake are tiny white bags inserted before baking or icing, containing flour, which indicates a rich marriage; sugar, signifying a love match; corn meal, which shows that the recipient will have to work for a living, and three empty bags, which foretell single-blessedness for the next year.

Get Victoriana by Email