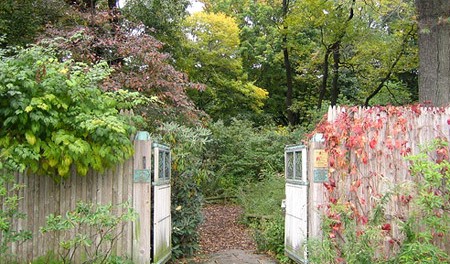 People pride themselves on their New York roots– and plants can, too! In 2011, in recognition of the 100th anniversary of its Native Flora Garden, Brooklyn Botanic Garden celebrates plants local to the region.

This yearlong tribute is intended to underscore the vital importance of plant conservation and offer practical ways for gardeners to renew and invigorate their local environment. A related program of classes and events will familiarize visitors with their neighbors in nature.

Brooklyn Botanic Garden’s Native Flora Garden was laid out in 1911 by landscape architect Harold Caparn and the Garden’s first curator of plants, Norman Taylor, who selected for the garden a diverse collection of plants that grow within 100 miles of New York City.

Today, visitors to BBG’s Native Flora Garden can roam through a miniature wilderness that displays an array of plant communities arranged by ecological habitat. After a century of urbanization and industrialization that has made Brooklyn a metropolis, the Native Flora Garden provides visitors with a rare opportunity to witness New York’s many distinctive natural habitats and the biodiversity they support.

“Imagine how prescient our founders were to have planted this garden 100 years ago,” says BBG’s president, Scot Medbury. “Visitors can immerse themselves today in New York City’s local plant communities without ever leaving the city.”

The Native Flora Garden is closely allied with BBG’s Science Department, which over the past two decades has mapped plant species distribution in every county within a 50-mile radius of New York City through the New York Metropolitan Flora Project (NYMF). NYMF provides detailed information about the distribution of more than 3,000 native and nonnative species and is used by parks and garden professionals as a guide to conserving native species and remediating habitats in the city’s public spaces and gardens.

In 2012, BBG’s commitment to display and preserve native plant communities will be strengthened as the Native Flora Garden nearly doubles in size. The expansion will reintroduce two important ecosystems—a coastal plain meadow and a pine barrens habitat—whose sun-loving plant communities have been crowded out by the increasingly dense canopy of trees that are now more than 100 years old. Both habitats will be planted using as many wild-collected specimens as possible, which—particularly in the case of the pine barrens—will make them extremely unique among public gardens in the region.

The garden enhancements will help home gardeners by modeling how native plant communities sustain themselves and support local wildlife. “Planting native plants makes good garden sense,” says Native Flora Garden curator Uli Lorimer. “Because they adapted over thousands of years to the climate and soil conditions of this region, native plants are particularly economical and sustainable.”