Did you realize that one can anticipate the style of a garden they are about to enter by a mere glance at the fence or wall which surrounds it, and the gate or door through which they gain admittance? Characteristically “like” encloses “like”, meaning the staring fence with an ugly gate forms the boundary of a garden where artistic taste is conspicuous by its absence, while on the other hand, the really beautiful garden is complete even to the garden gate which separates it from the outer world. 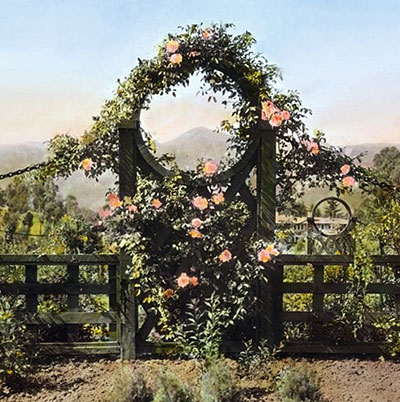 The basic garden wooden gate typically is nothing more than a door designed with bars and styles instead of being solid. The various ways how to build a wooden gate are countless from plain wood planks to elaborate Victorian shapes. Here we will illustrate various designs of wooden garden gates, including styles often found in a Victorian garden or a quaint cottage garden. 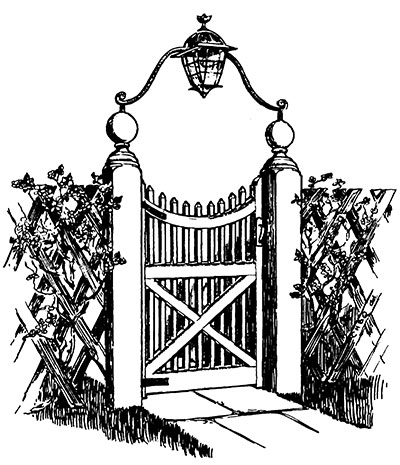 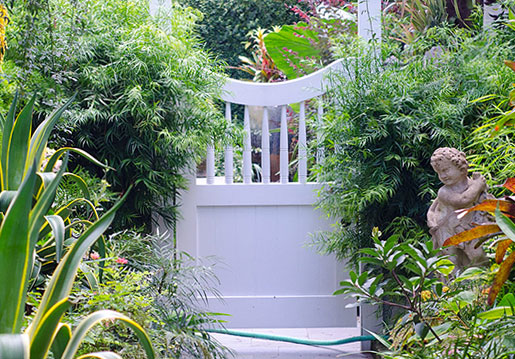 When making a wicket wooden gate or small gate, the do-it-yourself homeowner may save himself the trouble of cutting and planing round bars by buying a few broom handles. The handles make a neat fence when inserted at equal distances in two parallel and horizontal rails made to receive them and mortised at convenient lengths. They may also be used instead of iron bars in building a wooden gate or wicket gate, as shown below. 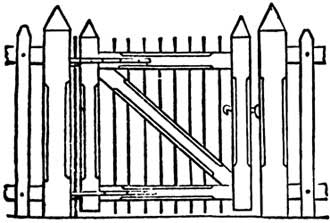 In these styles of wooden garden gates the rails and strut are a trifle narrower than the styles into which they are mortised. Holes are bored in the top and bottom rails and the strut, through which bars of iron are driven. Hinges, consisting of loops and straps, are fastened to the rails and these hinges rest on perforated plates driven into the hanging post or otherwise secured. A vertical bar is then passed through loops and plates, on which the gate swings. 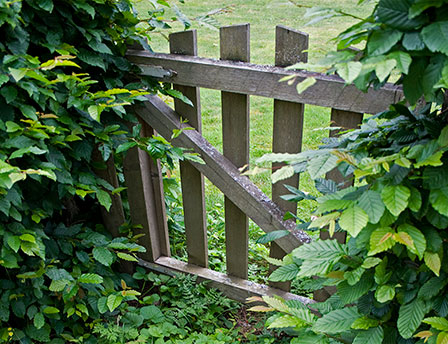 Most often, wooden garden gates close the entrance from the street to a garden and are ornamental in design. 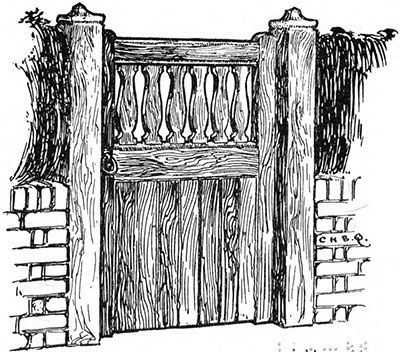 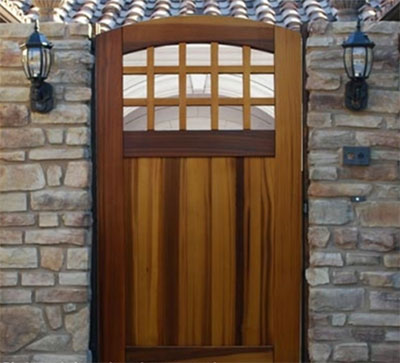 No time to build your garden gate? Pacific Gate Works has the Portland Side Yard Gate that is simple to install. The gate package includes a gate, hinges, latch and wooden jambs. The smooth, well sanded surface of the gate allows you to easily apply the finish of your choice.

How to Make a Wood Field Gate

Here you will learn how to build a wooden gate called a field gate. The ordinary field gate has supports formed by two stout posts, A, A, the lower end of each, B, B, being left rough so as to give them better holding when put in the ground. A hole having been dug for the posts, they must be set upright by aid of a plumb-level and then surrounded with stones, gravel, lime core, etc, which must be beaten in tight with a rammer. To make the gate, two styles, C, D, are first cut out, the style C, to which the hinges are fixed, being called the hanging style, while the style D, to which the latch is fastened, is called the falling style. 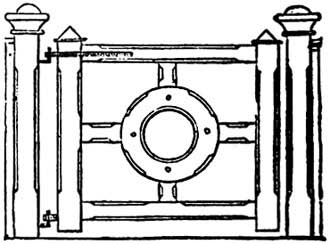 The above wooden gate consists of a central chamfered and attached by the four arms of a cross, also chamfered to the styles and rails. It will be noticed that in the drawing the center and corners are left open purposely. 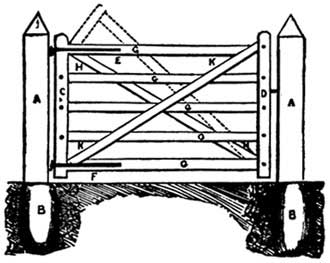 Five or six rails, as G, G, G, are then mortised into the styles and wedged up as tightly as possible. The hinges, E, F, are put along the bottom rails. They consist of a loop of iron, which slips over a staple driven into the gate-post, and two tongues or straps of iron which pass along the top rail on either side, bent to clasp the rail as well as the hanging style, and pierced at equal intervals with holes, through which small bolts are driven and riveted.

Field gates are fastened with a hook attached to the gate and falling into a staple driven into the post, against which the gate falls. Park gates and entrance gates of this description have a hole cut in the falling style, through which a short, flat piece of iron curled at one end is passed. This iron works on a pin driven through both style and iron which is pierced for the purpose, and the gate is secured by the bar dropping into a notch cut in the piece of iron of some thickness, which is attached to the face of the falling post. 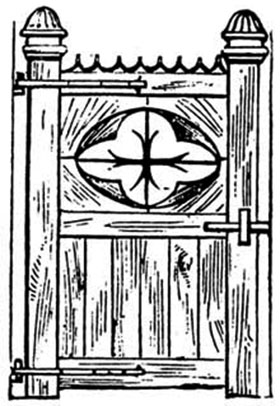 Massive wooden garden gates of Gothic character are shown. The principal parts of this gate are the styles and cross rails, which are fastened together by tenoning the rails into the styles. The lower part of the gate is filled with substantial boards, forming one large panel. In the upper part the corners are filled with pieces cut to form an oval or ellipse on each face, but chamfered or hollowed within so as to form four points springing out from the under edge of the curve. The open center is partly filled with a simple ornament in wrought iron, consisting of flat bars halved together at the center, and having shorter pieces springing from each side of the arms of the cross. The extremity of each arm may be finished with projecting pieces for attachment by screws to the inner edge of the oval. [Illustrations from Every Man His Own Mechanic] 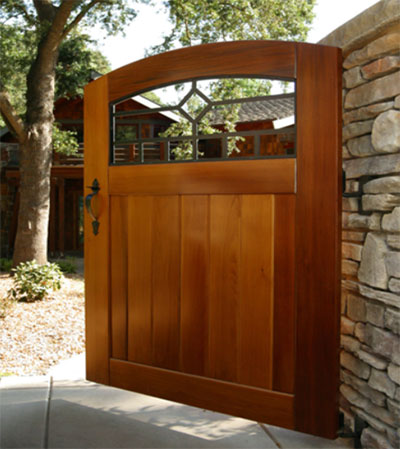 Love the look but lack the skills to build your own? The Craftsman Collection Mission Diamond gate, by Pacific Gate Works, combines the natural beauty of kiln-dried Western Red Cedar and the strength of a precision profiled metal art inlay. Simple to install, the gate package includes a gate, hinges, latch and wooden jambs. The smooth, well-sanded surface of the gate allows you to easily apply the finish of your choice.