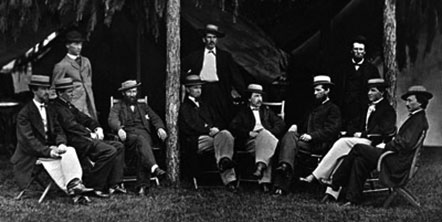 The Victorian gentleman of the 1860s followed the rules and protocols for proper dressing. Clothing that was both appropriate and simple could never offend, nor render its wearer conspicuous. It was mandatory that taste and judgment preside over the wardrobe. There were a few definitions of “dress” that guided him in his daily choice of clothing.

Undressed:
To be “undressed” was to be dressed for work and ordinary occupations, to wear a coat which he did not fear to ruin and a neck-tie which his ink-stand will not object to, even though his acquaintance might.

Dressed:
To be “dressed” on the other hand, was to be clothed in the garments which society pronounced as suitable to particular occasions. But there were shades of being “dressed.” A man was called “little dressed,” “well dressed,” and “much dressed,” not according to the quantity but the quality of his coverings.

Little Dressed:
To be “little dressed” was to wear old things, of a make that was no longer the fashion, having no pretension to elegance, artistic beauty, or ornament. It was also to wear lounging clothes on occasions which demanded some amount of care.

Much Dressed:
To be “much dressed” was to be in the extreme of the fashion, with the latest clothes, jewelry, and ornaments, with a touch of extravagance in colors. Thus to wear patent leather boots and yellow gloves in a quiet morning stroll was to be “much dressed,” and certainly did not differ immensely from being badly dressed.

Well Dressed:
To be “well dressed” was the happy medium between “little dressed” and “much dressed.” Thus while he avoided ornament and fads, he cultivated fashion, that was good fashion, in the make of his clothes. To be “well dressed” was to be dressed precisely as the occasion, place, weather, height, figure, position, age, and means required. It was to be clothed without pretension or eccentricity; without exaggerated colors, elaborate ornament, or senseless fashions. Good dressing was to wear as little jewelry as possible, to be scrupulously neat, clean, and fresh, and to carry his clothes as if  he did not give them a thought.

Photos about how to dress like a Victorian man from the 1860s.