The townhouse garden or city backyard garden is by no means the hopeless, dreary horticultural desert that one is led to believe. Whatever hopelessness enshrouds the small urban backyard garden, it is usually evolved from the attitude of mind of the owner or occupant of the particular backyard under consideration. If one takes the stand that the position is untenable and that nothing can be done, the probability is that nothing will be done; but if on the other hand there is a determined effort to ”start something,” then something is going to happen, and that something will doubtless bear results. 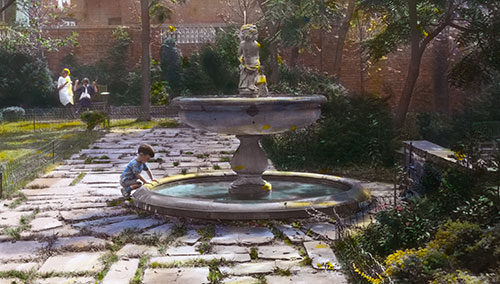 Garden of one of twelve New York City townhouses designed by John B. Snook in 1868, and remodeled in 1919.  [Library of Congress]

If the residence is a permanent home, then be creative and design the yard into walks, a bit of lawn, flower borders and shrubbery; for even a small backyard can accommodate a generous planting and such garden accessories as one may desire. One can use their imagination and design a formal garden or a charming cottage garden even in limited space. But if the home is merely a rental, then not much in the way of permanent improvements can be undertaken, yet the yard may be made charming by the use of bedding plants, annual flowers and vines sensibly arranged. 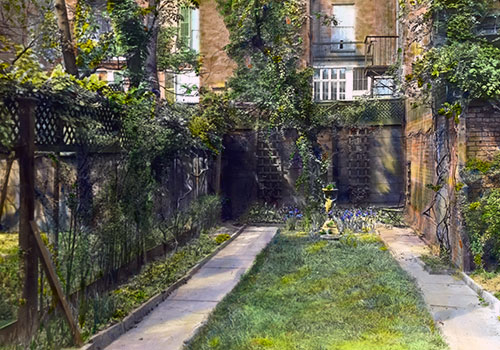 Townhouse on West 12th Street, New York featuring a vine covered fence and a birdbath on lawn. [Library of Congress]

The first thing to undertake will be a thorough cleaning up of the ground, removing everything that is not actually necessary and making the ground as smooth and presentable as possible.

The next thing in order will be hiding the division fences and any outbuildings that exist with vines or tall growing annuals. Narrow beds dug along the fences on either side may be planted with vines of quick growth, and such summer bedding plants and tall annuals as cannas and ricinus, to mask the rear fence. These plants which may be started in the house from roots and seeds and planted out when the weather is suitable. 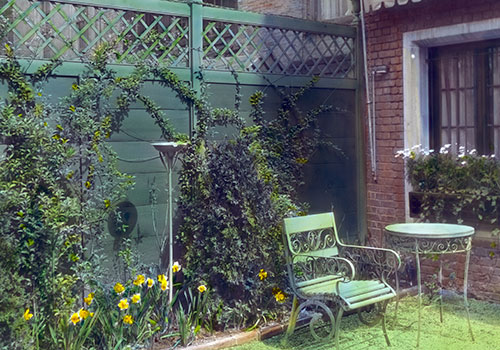 Usually it is preferable to leave the center of the city backyard open, seeding the area for a bit of lawn; but this is hardly practicable in the rental home. As a bare expanse of earth is anything but attractive, it will be better to put this part of the lot into flower beds, using low growing annuals or bedding plants and leaving broad walks around this miniature garden. This with the border beneath the fences will cover the lot so that only the paths remain, and if these can be covered with sand or gravel the result will be quite satisfactory. 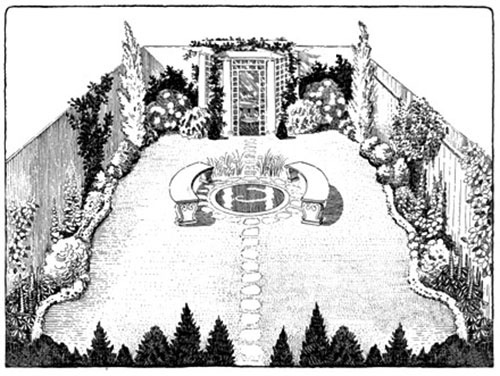 Period design of a Victorian city garden with vines on the surrounding fence.

An even better arrangement than the vines growing up the fences would be the creation of boxes on top of the fences filled with trailing vines, such as nasturtiums or other bright flowering vines. The boxes may contain upright plants as well — just the sort of planting that one makes in porch or window boxes, only on a somewhat larger scale. Window box gardening can be quite fruitful in masking undesirables scenery and the expense for this sort of work need not be great, as plain inexpensive window boxes will answer quite as well as more costly ones. They need only filling with good soil to be ready for the reception of such plants as one may elect to use. If the fence has a flat board on top, the boxes may be set directly on it, but if no top rail is present the boxes are easily adjusted by means of brackets attached to the fence posts.

Where the boxes are adopted instead of planting vines at the foot of the fence, then scarlet salvia, white feverfew, geraniums, asters, and the like may lift their bright heads from the ground to meet the down trailing vines. Petunias and verbenas may be used as an edging, and the whole will furnish a wealth of bloom from early summer to frost. 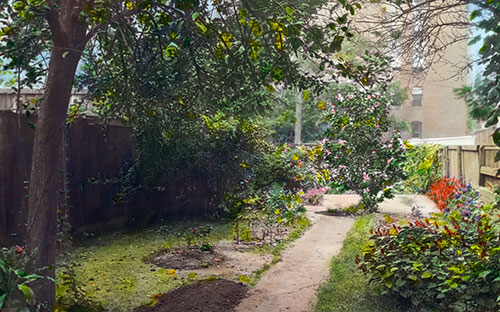 Pathway in center of city garden in New York. [Library of Congress]

Taller growing annuals may be banked about the base of the house and the rear entrance steps. Erect a trellis of wire above the entrance and cover this with Japanese morning glories, Hibbertia scandens, passion vines and similar free blooming vines. On top of the balustrade and in all the rear windows place window boxes of bright flowers. If a continuous succession of boxes along the entire fence seems too great an undertaking, they may be separated by a tall growing plant to fill the opening and relieve the monotony. Then if one is faithful with the watering hose, zealous in training the growth of vines and plants, and will gather flowers before they fade and keep the plants free from insect pests, a beautiful city backyard can be enjoyed for months on end. 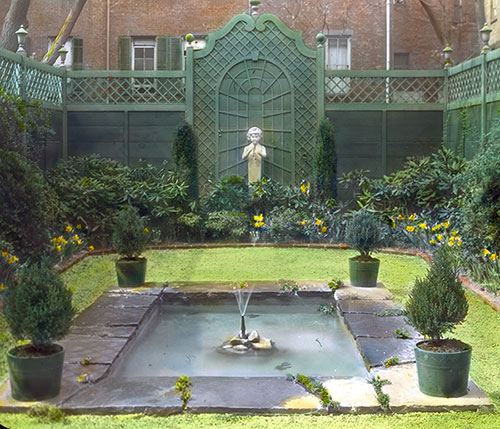 The permanent city backyard, however, should have as its chief charm a stretch of velvety green sod, well-trimmed, and the flowers should be merely the framework and adornment of its beauty. A broad cement or graveled path, or one with stepping stones down its center, broadening midway of its length into a circle enclosing an artificial pool for lilies and goldfish and with garden seats at each side, may be the chief feature of this part of the yard. 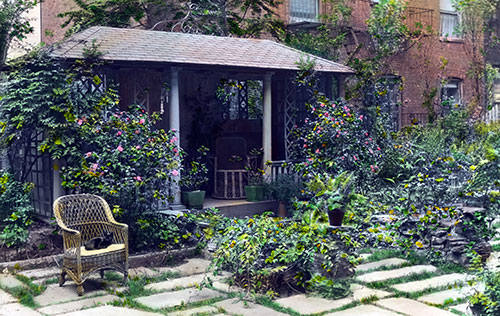 Mass planting of tall growing perennials and shrubs may serve as a screen for an enclosing fence or undesirable view. Taller shrubs and ornamental trees may close the vista in the rear, and a little tea house or pergola makes a shady retreat at the end of the path. 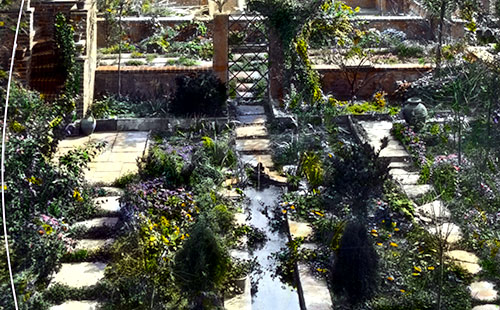 The common garden area of Turtle Bay Gardens, a city rowhouse enclave between 47th and 48th streets and Second and Third Avenues in New York. In 1920, a great common garden was completed at midblock. [Library of Congress]

Stepping stones give a quaint and Victorian flavor to a garden, but they must be set low enough to allow the lawn mower to pass freely over them; otherwise they will prove a troublesome arrangement indeed. Walks of red brick, especially where the enclosing walls are of brick, are charming. Seats of red cement may be used with these, or wooden seats painted green will be in harmony with the garden. There are many charming garden seats of wood that are far more comfortable than stone or concrete benches. 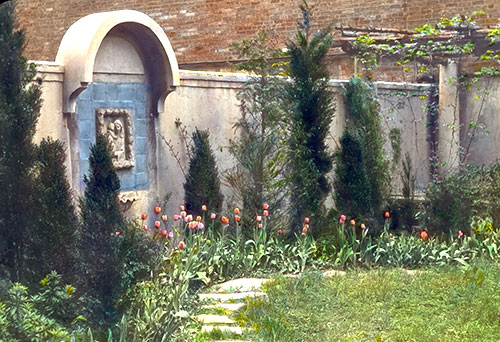 If one’s view is closed by a blank wall of a high building and the color is not too objectionable, much may be done to relieve the situation either by planting vines which cling by aerial rootlets, or, if this is impracticable, by planting a short distance away some tall, slender growing trees like soft maples, larches or tamaracks — something that will sway and nod in every breeze and throw an exquisite tracery of limb and leaf on the canvas of the wall. You will see a most depressing blank wall transform into a beautiful shifting picture by this simple design.