The Museum at FIT presents Exposed: A History of Lingerie, an exhibition that traces developments in intimate apparel from the 18th century to the present. Exposed features over 70 of the most delicate, luxurious, and immaculately crafted objects from the museum’s permanent collection, many of which have never before been shown. Each piece illustrates key developments in fashion, such as changes in silhouette, shifting ideals of propriety, and advancements in technology. 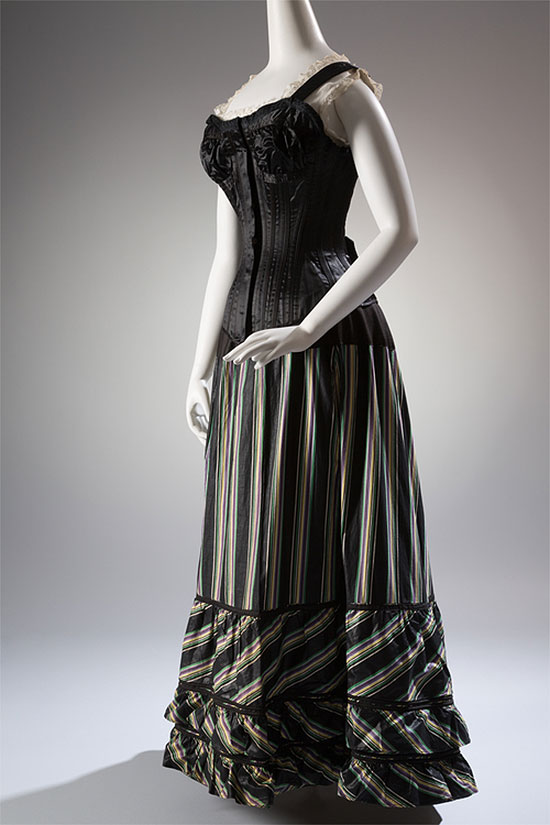 The concept of underwear-as-outerwear is most commonly associated with the 1980s, but the look of lingerie has long served as inspiration for fashion garments. Exposed opens with several pairings of objects that underscore that connection. For example, a 1950s nylon nightgown, made by the upscale lingerie label Iris, is shown alongside an evening gown by Claire McCardell, also a 1950s garment, created in a similar fabric and silhouette. McCardell was one of the first designers to use nylon—a material typically marketed for lingerie—for eveningwear. A 2007 evening dress by Peter Soronen features a corset bodice, the construction of which is highlighted with bright blue topstitching. It is flanked by two 19th-century corsets, one made from bright red silk, the other from peacock blue silk. 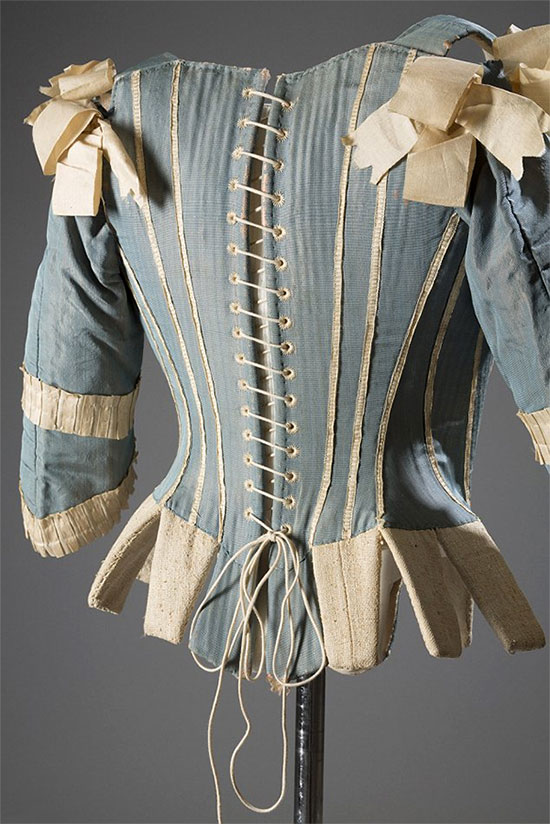 Sleeved corset (then called stays), circa 1770, made from sky-blue silk with decorative ivory ribbons that crisscross over the stomach. Stiffened with whalebone, possibly Europe. Deeper meaning: Buried within the beauty of this intricate Rococo-era corset is a socioeconomic message. Due to the artifact’s constrictive nature and French court hue, its wearer likely led a life of work-free leisure. [Image credit: Fashion Institute of Technology, www.fitnyc.edu/museum.asp]

Women’s undergarments were generally modest in the first half of the 19th century. This is exemplified by a dressing gown from circa 1840, made from white cotton. Although the dressing gown was simply designed and meant to be worn within the privacy of a woman’s boudoir, its full sleeves and smocked, pointed waistline mimic fashionable dress styles of the era. 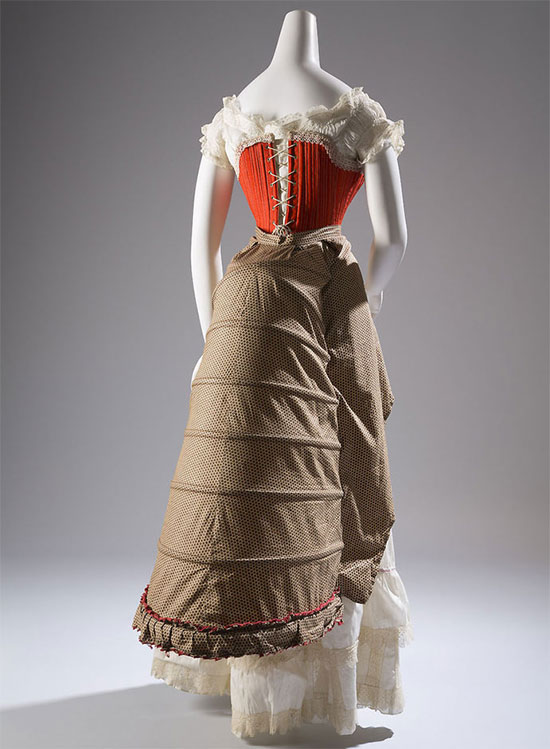 Victorian era corset of wool, silk, cotton and steel, circa 1880. The rise of steel in the industrial 19th century led to innovations in fashion as well, including this underskirt and corset – used to cut the era’s infamous S-curve silhouette – which utilized metal instead of whalebone to achieve its structure. [Image credit: Fashion Institute of Technology, www.fitnyc.edu/museum.asp]

Underwear became more colorful by the late 19th century, with the fashionable silhouette sometimes necessitating an elaborate understructure. A corset in cherry red wool and silk, circa 1880, helped its wearer achieve the ideal hourglass silhouette. This corset is shown with a bustle from the same period, constructed from bands of metal and brown polka-dot fabric. Bustles were essential under the skirts of the 1880s, which were heavily draped in back. 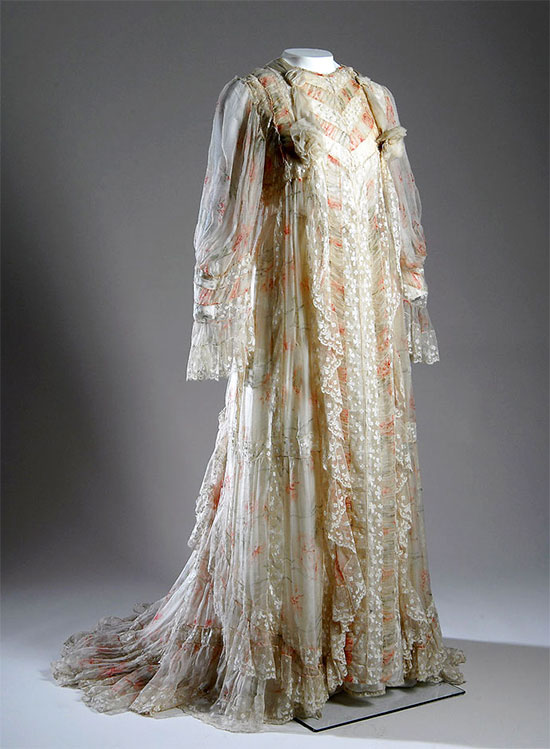 Fernande Burel tea gown, chiffon, silk, and lace, circa 1900, France. The 19th century’s social standard for house calls meant that even the most leisurely of women needed to look well-dressed, even when relaxing at home. Garments like this French tea gown from 1900 were included in the lives of aristocrats who needed to be ready to accept visitors at the drop of a hat. [Image credit: Fashion Institute of Technology, www.fitnyc.edu/museum.asp]

By the early 20th century, intimate apparel was often as beautiful and alluring as it was functional. For example, tea gowns were at-home garments, but because they could be worn to receive visitors, many were lavishly embellished. A tea gown from circa 1900, made by Parisian designer Fernande Burel, is created from layers of delicate, printed silk chiffon and lace. 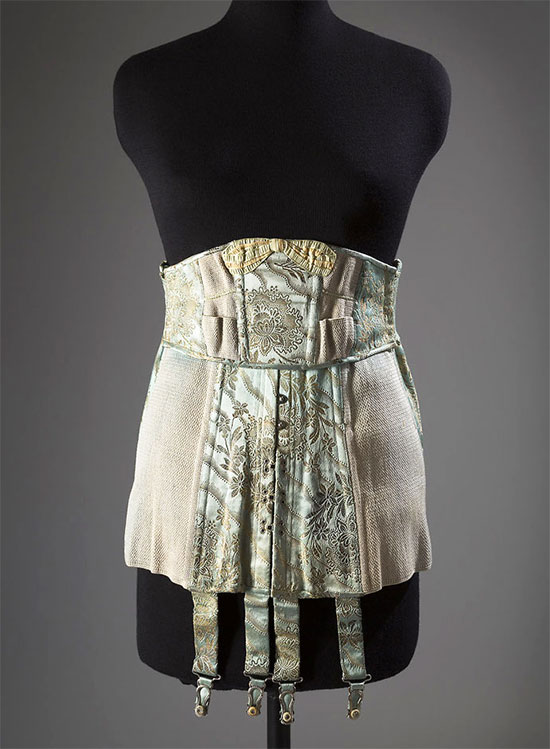 The slender, youthful silhouette of 1920s fashion demanded more streamlined undergarments. Many women turned to a modernized version of the corset to enhance their figures. An example in brocaded silk, from circa 1920, features elastic panels that slim the wearer’s waist and hips while also providing flexibility. 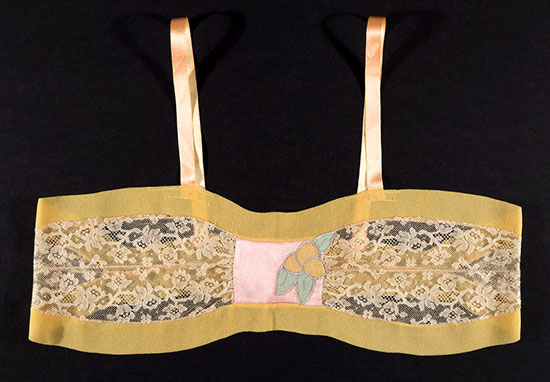 Bras were often made from delicate materials that simply covered and contained the breasts. Featured is a mid-1920s bandeau bra of yellow silk chiffon and ivory lace, with a decorative silk appliqué. This filmy style bears little resemblance to the structured bust supporters that were introduced during the late 19th century. 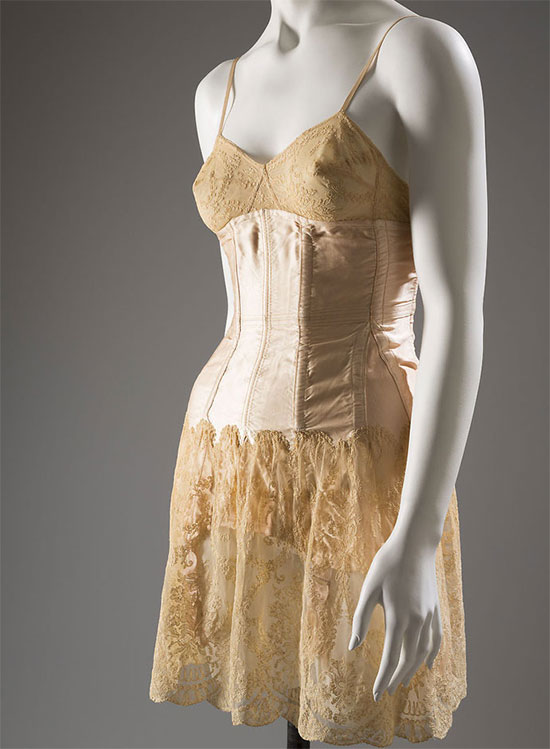 Clothing of the 1930s demanded a slender but shapely silhouette. Many girdles from this decade acted as “all-in-one” foundation garments that supported the breasts, cinched the waist, and smoothed the hips. An example from circa 1930 in peach silk satin, made by the French luxury lingerie brand Cadolle, also includes a lace skirt that acts as a slip. The early 1940s is represented by a diaphanous nightgown in yellow silk crepe by Juel Park, a Hollywood-based designer of couture lingerie whose high-profile clientele included Marlene Dietrich, Marilyn Monroe, and Elizabeth Taylor. 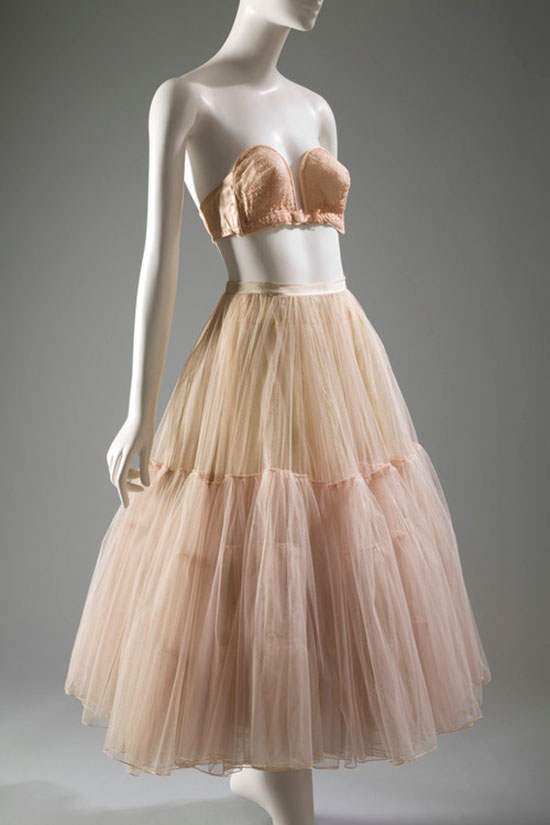 By the 1950s, the hourglass silhouette was back in fashion. In addition to a variety of heavily structured foundation garments, petticoats made from layers of net were often worn under skirts, giving them the desired fullness. One featured example, made to be worn under a couture gown by Christian Dior, is constructed from intricately layered tiers of tulle, taffeta, and horsehair to maintain its flaring shape. This petticoat is paired with a strapless, overwire bra in pink lace and stretch satin.

Rudi Gernreich’s lingerie designs epitomized the free spirit of the 1960s. Exposed includes an example of Gernreich’s “no-bra bra” from the mid-1960s, a wireless, padding-free design that adapted to the natural form of the breasts. It is paired with a zebra print half-slip in pink-and-white nylon, also by Gernreich. In 1976, Valerie Porr emphasized the natural body in a different way with green silk lounging pajamas printed with the motif of a nude woman gazing in a mirror. 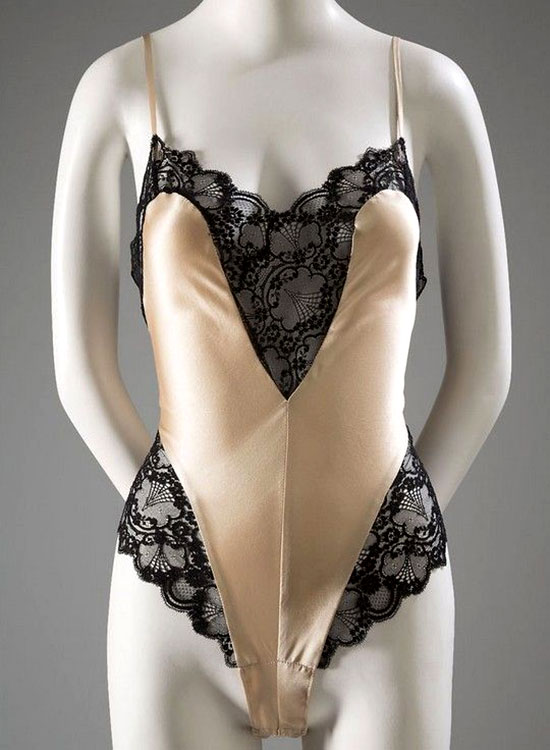 Continuing into the 1980s, the exhibition includes a silk teddy, designed by Patricia Fieldwalker. Although the combination of camisole and panties originated in the 1920s, Fieldwalker’s version, with its especially high-cut leg and deep V-neck, is decidedly new. Erica Tanov’s sleepwear set from 1993 includes a pajama top and bottom, paired with a simple bandeau bra. The supple linen fabric and oversized fit of the pajamas makes them comfortable, but also sensual.

The exhibition concludes with examples of high-end, contemporary lingerie. Highlights include a custom bra and panty made from nude silk chiffon by Jean Yu, as well as a retro-style lingerie set with provocative cut-outs by Chantal Thomass. Also featured is a L.A.M.B. x Hanky Panky long-line bra and panty from the exclusive design collaboration between Gwen Stefani’s fashion brand and Hanky Panky. This L.A.M.B. designed camouflage print on Hanky Panky signature stretch lace is fun, sexy, and fluorescent.

Exposed: A History of Lingerie is organized by Colleen Hill. The exhibition will be on view through November 15, 2014, in the Fashion and Textile History Gallery at The Museum at FIT. The Fashion and Textile History Gallery presents biennial exhibitions examining aspects of the past 250 years of fashion. Exhibitions are curated exclusively from The Museum at FIT’s extensive collection. The exhibition will be accompanied by a book, also titled Exposed: A History of Lingerie (Yale University Press). Written by Colleen Hill, with an introduction by Valerie Steele, director and chief curator of The Museum at FIT, the book will examine approximately 50 of the objects in the exhibition and include full-color photographs of each.