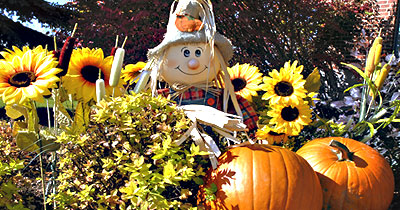 Massive haunted house in a 185 year old prison is the ultimate destination for thrill-seekers and Halloween lovers. Set inside the massive castle-like walls of the 185 year old Eastern State Penitentiary in Philadelphia, the setting for Terror Behind the Walls is creepy in itself. Eastern State Penitentiary was once the most famous and expensive prison in the world, but stands today in ruin, a lost world of crumbling cellblocks and empty guard towers. Terror Behind the Walls, America’s largest haunted house, is located inside the massive castle-like walls of the penitentiary. This extraordinary theatrical production, consistently ranked among the top haunted attractions in the nation, runs select evenings from September 18 through November 7, 2015.

Known for its grand architecture and strict discipline, Eastern State Penitentiary opened in 1829 as the world’s first true “penitentiary,” a prison designed to inspire penitence, or true regret, in the hearts of convicts. This gothic structure, perfect as a haunted Halloween attraction, with soaring 30-foot high fortress walls, is intimidating enough during the day. At night, the cellblocks fall into darkness, and the building becomes truly terrifying, especially at Halloween.

Night Watch (one of five separate attractions at Eastern State Penitentiary's Terror Behind the Walls) is the world's first Halloween haunted attraction that visitors explore with flashlights -the ultimate Halloween experience!

Terror Behind the Walls has grown from a single-night event in 1991 to a 31-night event with shows selling out far in advance. More than half of the visitors who attended in 2014 traveled to Philadelphia for the event, with tickets sold to visitors in 49 states and 21 foreign countries, making Terror Behind the Walls a national and international destination for thrill-seekers and Halloween lovers.

An extraordinary theatrical production, Terror Behind the Walls features Hollywood-quality sets, custom-designed props, animatronics, and digital sound effects, all taking place within the walls of the prison. It takes an elite team of 14 makeup artists almost three hours to prepare the cast of more than 200 Halloween performers each evening. Terror Behind the Wall begins with a critical decision for visitors: should they explore the prison and watch the action, or should they mark themselves to truly interact with the denizens of the cellblocks? Those who opt in for true interactivity may be grabbed, held back, sent into hidden passageways, removed from their group, and even occasionally incorporated into the show. They will deal with the consequences of their decision through six long attractions.

To celebrate its 25th season of scares, Terror Behind the Walls unveils the most ambitious redesign in the history of the event – two groundbreaking new attractions. Inside Quarantine: 4D, visitors learn of an infectious outbreak, whose symptoms include hallucinations, blurry vision, distorted depth perception, and other mind-altering effects. Flat walls appear to have depth, creatures emerge from (seemingly) nowhere, and some brave visitors will be challenged to face their worst fears.

Also new for 2015 is Break Out, the final Terror Behind the Walls attraction. Just when visitors think they have found freedom, they find themselves in the middle of a prison break! Inmates surround them using every way imaginable to escape, including barrels, ropes, tunnels, ladders and crates. Visitors must keep an eye out at every corner, as inmates may even be using them to aid in their attempt to gain freedom.

When Eastern State Penitentiary was completed in 1836, it was known for its radial floor plan and central surveillance. All seven original cellblocks could be seen by a single overseer or guard from the Central Rotunda. However, when Cellblocks 8 and 9 were added in 1877, mirrors had to be installed in the hallway to allow guards to see down these new blocks from the center.

Is it Really Haunted?

Many people believe that Eastern State Penitentiary is haunted. As early as the 1940s, officers and inmates reported mysterious visions and eerie experiences in the ancient prison. With the growing interest in paranormal investigations, Eastern State Penitentiary may now be the most carefully studied building in the United States. Nearly 60 paranormal teams visit to explore the site in a typical year. The historic site’s website features extensive television, video, and website links that document real paranormal investigations inside the 182-year old prison.

The penitentiary has been featured on The Travel Channel’s Most Haunted Live, Fox Television’s World’s Scariest Places, TLC’s America’s Ghost Hunters, The Travel Channel’s Ghost Adventures and Paranormal Challenge, and MTV’s FEAR. Footage captured on SyFy’s Ghost Hunters may be the most controversial ghost sighting of the past 10 years. During the filming of Paranormal Challenge this year, Zak Bagans called Eastern State Penitentiary “one of the most haunted places in the world.”

Meals on Wheels. Eastern State Penitentiary was the worldís first true "Penitentiary." In order to encourage penitence - or true regret - in the hearts of criminals, inmates would spend their entire sentence in solitary confinement. Meals were delivered to the inmates and they ate in their cells. Food carts ran on tracks along the catwalks in the two story cellblocks.

All sections are included in one admission price:

For more information, the public can visit the penitentiary’s website at  www.TerrorBehindtheWalls.com