The most important collection of porcelain snuff boxes ever assembled was to be sold at Bonhams, New Bond Street, London . Comprising 80 boxes, the Helmut Joseph Collection gives a comprehensive overview of the history of European ceramics in snuff boxes, with examples from all major factories including Capodimonte, Meissen, Fulda and Sevres. 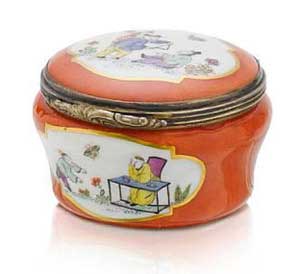 Prolonged exposure to air causes snuff to dry out and lose its quality, so pocket snuff boxes were designed to be airtight containers with strong hinges, generally with enough space for a days worth of snuff only. The jewel-like objects are immensely tactile and widely varied in design and style. These exceptional and exquisite objects were considered the pinnacle of refined 18th century court culture at its most luxurious and the collection has been exhibited in the world-renowned institutions of the Rijksmuseum, Amsterdam, alongside the Gilbert Collection in Somerset House and most recently at the Bowes Museum, Co. Durham. The entire collection is estimated to fetch £800,000-1,000,000. 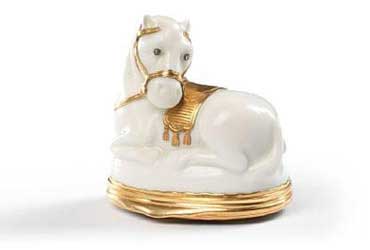 The most expensive in the collection has an intricately detailed depiction of a Dresden landscape on the inside lid, which is after an engraving by Bernardo Bellotto (estimate £100,000-150,000). There are also more affordable boxes, such as a small St Cloud example dating to the 1730s in the shape of a horse with diamond eyes (estimate £3,000-5,000). The collection has a large variety of boxes made as diplomatic gifts between nobility, as well as intimate family gifts, such as a magnificent Meissen boxwith the portrait of Maria Josepha, mother-in-law of Louis XVI. This extremely rare box painted by Heinrici was most likely a gift to one of her daughters (estimate £20,000-30,000). 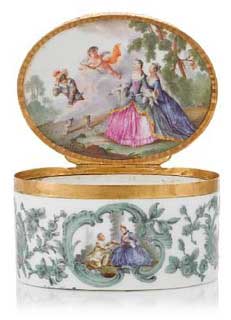 Meissen gold-mounted oval snuff box, circa 1750-60. [The exterior moulded with rococo cartouches and flowers painted in shades  of green, each enclosing a woodland scene with figures from the Commedia  dell’arte and elegant couples, the inside cover with a scene of Cupid arriving  on a cloud between Harlequin and an elegant lady and her attendant, the reeded gold mounts chased with foliate scrollwork and with a shell thumbpiece.  Estimate: £10,000 – 15,000, € 11,000 – 17,000, US$ 16,000 – 25,000].

The examples for sale at Bonhams come from what is without doubt the greatest collection of snuff boxes in the 20th century, formed by Helmut Joseph. Joseph began collecting boxes following the example of his father, who already has a substantial collection before WWII. A real connoisseur of early Meissen porcelain, he had a profound and intimate relationship with his subject, and a deep knowledge of the field. Helmut Joseph generously made his collection available to the public; he always showed an interest in sharing information, and indeed supporting the development of knowledge on ceramics, be it by funding museums, or publishing his own collection.

Rich in detail and made from precious materials these gem-like pieces were among the most precious and intimate gifts bestowed by princes and monarchs. Many of them feature in the standard reference on the subject by Barbara Beaucamp-Markowsky, who writes:

“Superbly decorated boxes in gold, enamel, mother-of-pearl or precious stones, and above all in porcelain, were adored by the “beau mode” of the 18th Century, indeed, such was their passion that it has been described as the “box culture period” of the siècle gallant. Snuff-boxes were then the “musts” of the world of elegance. They bore gracious witness to one’s good taste and refinement. Porcelain boxes from the colourful European factories possess such exquisite elegance and attractiveness, the delightful paintings on the inside of the lids so fascinating, that they are comparable in their fineness with that of the most exacting miniature paintings.”