Provenance,  a word that describes the history of a piece, is a significant factor in determining the value of an antique. Provenance refers to an object’s history, or who owned the object, when and where. Many valuable antiques have oral stories that are handed down through families but without precise documentation of a story, it does not add value. This antique purse has tangible proof of the beginning of its life with the embossing of the date and ownership.

The small tan colored leather purse trimmed in royal blue piping was presented to Alexandra, The Princess of Wales in 1879. The gilt   lettering reads:

Presented to   H.R.H. the Princess of Wales
on June 24th 1879.
at   the Opening of the New Buildings
of the ALEXANDRA ORPHANAGE
HORNSEY RISE. 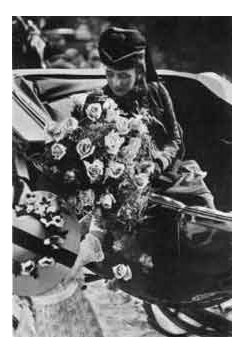 Through research we know that Alexandra (1844–1925), was queen consort of Edward VII of Great Britain, whom she married in 1863. She was the daughter of Christian IX of Denmark. In 1879 she was H.R.H. the Princess of Wales; she did not become queen until Queen Victoria’s death in 1901. The Alexandra orphanage for infants was a charity to house and educate   children up to the age of 8; and was built between Hazelville and Sunnyside roads. The purse was presented to the Princess of Wales to commemorate the opening of new buildings at the facility. In this case, not only is the provenance of the antique documented but it   also leads back to a great name of the past, a British Queen.