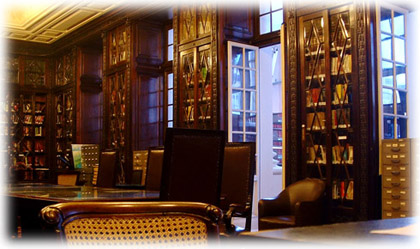 What do one of Churchill’s cigars, a 35 million years old   fossilised giant pig, a silver wheelbarrow presented to W.E. Gladstone, historic   butterfly cabinets from the Natural History Museum and Christmas presents from   the Duke and Duchess of Windsor have in common? They all feature in Bonhams annual Gentleman’s Library Sale on 19 January. 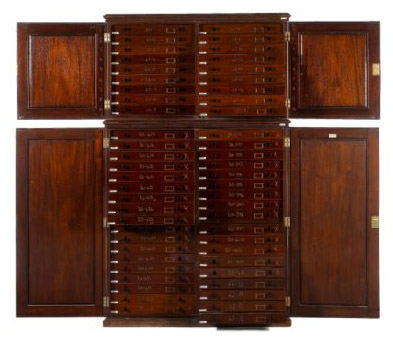 During the war, portraits of Churchill were important propaganda tools but he   rarely actually sat for them. In 1944 he did so, briefly, for the artist Frank O   Salisbury who had already painted him many times. When the Prime Minister left,   he discarded his half   smoked cigar which the painter kept as a souvenir. It has been in the family   ever since and is estimated at between £600 and £1,000.

A perfect place to keep it would be one of the 46 collectors’ cabinets from the Natural History Museum. Until   recently they held the world famous butterfly collections of three Victorian   gentlemen who competed to accumulate the greatest number of specimens and the   most impressive. They range in estimate between £300 and £3,000. 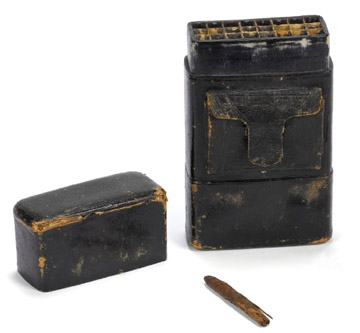 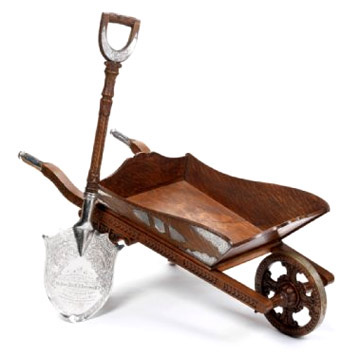 Antique Wheelbarrow –  Of Political and Railway interest; A late Victorian silver mounted wheelbarrow and shovel, by Walker & Hall, Sheffield 1892. Engraved with the following inscription “Presented by the Chairman and Directors of the Manchester, Sheffield and Lincolshire Ry., Co,m The Right Hon W. E. Gladstone. On the occasion of his cutting of the first sod of the Wirral Railway from Hawarden Bridge to Birkenhead 21st Ocotober 1892″. Estimate: £20,000 – 25,000, USD 32,000 – 40,000. [Image: Bonhams]

Four times Prime Minister, William   Ewart Gladstone, was presented with the sliver wheelbarrow to commemorate   his cutting of the first sod of the Wirral railway in 1892. It comes complete   with spade and is estimated at between £20,000 – 25,000. There is a memento of   another great Victorian in Isambard   Kingdom Brunel’s Cigar Box (estimate £22,000 – 30,000). An inveterate   smoker, Brunel got through up to 40 cigars a day and is often pictured, cheroot   in mouth and cigar case strapped across his chest.

Finally, Christmas   presents from the Duke and Duchess of Windsor to their private secretary for ten   years, Mr Victor Waddilove, are among a small archive of memorabilia   connected with the controversial couple (£2,000-2,500) The gifts include a gold   pen knife and a silver beaker, both engraved with the ciphers of Edward and   Wallis.

The Gentleman’s Library Sale is now in its 11th year. Unique to Bonhams, the   sale features all kinds of objects that may have been found in a Victorian or   Edwardian Gentleman’s Library from fossils to cigarette boxes, leather armchairs   to globes, chess sets to family portraits.