While the fascination with gardening has been going on since Eden, it was during the nineteenth century Victorian era that gardening became widely popular due in part to new technologies, more diverse plant stock, and the rise of the middle class and, with it, the invention of suburban living. Nevertheless, the number one reason gardening increased in popularity during the 1800s was the rise in the amount of leisure time middle class men and women could devote to it. 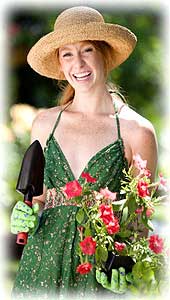 The underlying theme of the Victorian garden, as in much of Victorian life in general, was man's conquest over the elements. Nothing exemplifies this so much as the lawn. Thanks to the efforts of the seed companies and nurseries, the lawn became one of the most noted features of the American landscape, appearing in cities and towns from Maine to California.

If you've ever had to maintain an average-sized lawn you know how much time it takes -- a "perfect" lawn requires constant attention. Once lawn perfection had been attained, our Victorian forebears sought to embellish it, and did so by attempting to turn their lawns into outdoor parlors. Indoor parlors needed to be decorated and so did those out-of-doors. There are eight essential elements of a late Victorian garden, including Victorian Garden plants.

Lawn: A front and rear lawn were considered imperative in a formal garden. Cottage gardens and woodland gardens were more informal, and lawns were not such a requisite. The large expanses of lawn on estates were trimmed by gang mowers, drawn by horses. The push mower, for more modest lawns, was patented during Victoria's reign. Today a landscape designer can go mobile in designing their outdoor space by using a landscape app. Landscape design apps allow users to visualize and then create a design from scratch on the iPad using a photo taken with the tablet’s camera.

Trees: Trees were used primarily to shade important parts of the house where direct sun was unwelcome, such as a dining room or veranda. Trees were also used to frame the carriage drive or approach to the house. In the city, trees were often planted along the street to aid in privacy. Weeping trees and those with interestingly colored or shaped leaves were popular and used strategically to draw the eye. Depending upon climate, one might collect exotic trees and "display" them as part of the lawn decor. Most often these exotics were kept in conservatories.

Shrubs: Shrubs were used mainly for delineating property lines or marking paths. They might also be used to hide an "unsightly" wooden fence or house foundation, or used to frame doorways or bay windows. It was popular to mix the species of shrubs.

Fencing: Most properties at the turn of the century were fenced. Cast iron was by far the most popular material because it was the most ornamental and was also used for outdoor furniture. The more elaborate the home, the more elaborate (usually) the fence and gate. In more informal settings, rustic fencing was used. This might be made of "rustic" wood bent into decorative motifs. The picket fence was to be hidden with shrubs at best, or vines if shrubs were out of the question.

Ornaments: Urns, sculpture, garden water fountains, sundials, gazing balls (lawn balls), birdbaths, and man-made fish ponds were all commonly used. Cast iron was a commonly used material for such accoutrements. Often, urns were not planted with anything, but were simply set in pairs to ornament stairs or balustrades.

Seating: Garden benches, seats, pavilions, garden seat trellis designs and gazebos were made as decorative as possible. Cast iron or "rustic" wood were the most commonly used materials. Seats were placed under trees along garden walks, and of course in pavilions and gazebos. Rattan and wicker furniture was used mainly on porches and in sun rooms of the house.

Flowers and Plants: Carpet bedding, the use of same-height flora, was popular. Most often used to depict a motif or design (such as the floral clock in Niagara Falls, Canada), carpet bedding came under attack by gardeners like Gertrude Jekyll, who thought that each flower and plant should be grown for its intrinsic beauty and not as part of a "carpet." Jekyll's idea of an "herbaceous border" called for flowers of varying heights. Usually planted along a shrub border, wall, or garden path, the herbaceous border began with the shortest plants in the front. Each successive row of flowers would be taller than the last, with the tallest plants at the back. Rose garden designs were extremely popular and climbing varieties were often trained over a trellis, bower or pergola. Urban dwellers without much of a yard would often plant large urns beside the front door with flowers or small shrubs. Flowers could also be planted along the front walk underneath the shrubs which bordered it. Window boxes were also popular. If your want to design your own Victorian garden, download free landscape design software. You can choose bushes and shrubs; design a flower garden, layout a sprinkler system … all on your computer.

Vines: Vines of all types were used as decoration and to hide "unsightly" features, such as fences and tree stumps. Vines could also be trained up the side of a porch to ward off the sun.

Old-fashioned types of flowers and plants are fairly common today. Some companies pride themselves on their collections of antique or heritage seeds that many hybrids sprang from. Check with your local plant seller for old-fashioned Victorian garden plant varieties. In the US, there are several companies from which seeds and plants of old-fashioned varieties may be purchased.

About Author: Cheryl Hurd has been writing about the late Victorian Era for many years, and is the author of several "little books for Victorian pursuits", including Dressing up Victorian and the Victorian Yellow Pages, a mail order resource for Neo-Victorians. Cheryl was also invited to lecture on Victorian domesticity at the Carnegie Museum in Pittsburgh, PA.

Use a Garden Planner for Your Own Design

In planning your own garden, there are several ways to use your computer or iPad. Not all people have enough horticultural expertise to choose plants and arrange them for best results, but with free garden design software, you can try out this option. You can also design your own garden online with a free garden planner. With a kitchen garden planner, you can design your vegetable garden online by drawing your garden layout and click to place the crops where they want to grow them.