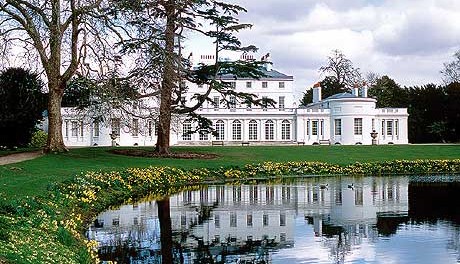 [Frogmore House from across the lake. Photo: Christopher Simon Sykes]

A favourite royal retreat for over 300 years, Frogmore House and Garden will open to the public on 17, 18 and 19 May for the annual Charity Garden Open Days and on 6, 7 and 8 August 2011. Visitors have the chance to discover Frogmore’s delightful interiors and beautiful grounds set in the magnificent private Home Park of Windsor Castle.

Built in the 17th century, Frogmore was purchased for George III’s consort, Queen Charlotte, and has since been a tranquil, country residence of successive monarchs.  It is no longer an occupied royal residence, but is frequently used by the Royal Family for private entertaining.

The interests and talents of several generations of the royal family have influenced Frogmore’s interior.  In particular, Queen Charlotte’s passion for botany is reflected in the decoration of the house.  She commissioned Mary Moser, the renowned 18th-century flower painter, to decorate one of Frogmore’s principal rooms to resemble an arbour open to the skies.  The Cross Gallery, which spans the entire breadth of the building, was painted with garlands by Princess Elizabeth, the daughter of George III and Queen Charlotte.   Frogmore was lived in by Victoria, Duchess of Kent for almost 20 years, and works by her and by her daughter Queen Victoria are on display in the house.  Queen Victoria often visited Frogmore during her long widowhood and would work on her papers there. Water colours by her daughters, the Princesses Victoria and Louise, can also be seen in the house.

One of Frogmore’s enduring attractions is its tranquil garden. Based on a model ‘picturesque’ landscape, it was first laid out in the 1790s for Queen Charlotte with 4,000 new shrubs and trees.  Garden features, including a Gothic Ruin, were added shortly afterwards.  The design and planting schemes seen today incorporate additions made during Queen Victoria’s reign, and, in the 20th century, by Queen Mary and Her Majesty The Queen.  Visitors can enjoy gentle garden walks and views of Queen Victoria’s Tea House, the white marble Indian Kiosk and the 18th-century lake.

Frogmore House and Garden are open on 17, 18 and 19 May in aid of The National Gardens Scheme, Thrive, and Family Friends in Windsor and Maidenhead respectively, and on 6, 7 and 8 August. For more information, please visit web site.