The Museum at FIT presents Sporting Life, an exhibition exploring the relationship between active sportswear and fashion from the mid-19th century through the present. Clothing for sporting activities has often influenced fashion—and vice versa. In fact, sportswear manufacturers have been responsible for many innovations in performance apparel, even as they recognize that “fashionability” is an important factor. Indeed, much of today’s active sportswear is just as fashionable as it is functional. 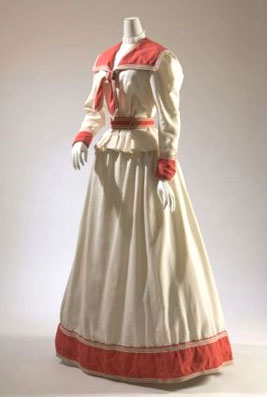 Featuring more than 100 garments, accessories, and textiles representing 16 sports, Sporting Lifediscusses the history of active wear over the past 150 years, examining the changes in silhouette, construction, and technology that have improved the performance and aesthetic of active sportswear. Because fashion designers often draw inspiration from the clothing worn by athletes, the exhibition also juxtaposes active sportswear garments with ready-to-wear styles that they have inspired. 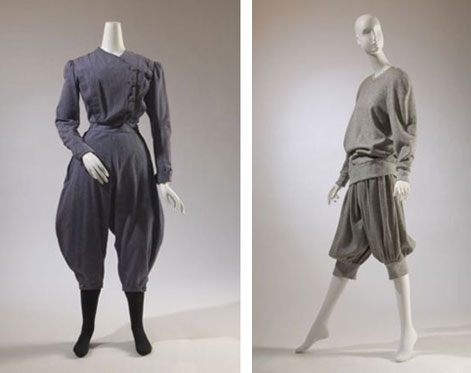 Sporting Life is organized thematically, by sport, with an introductory gallery dedicated to exercise and dance. As the cultural importance of physical fitness has increased exponentially since the late 19th century, the exhibition includes a number of women’s gym wear garments, beginning with a bifurcated gymnasium suit, circa 1896. Stylish active wear from the mid-20th century will be highlighted by a Claire McCardell striped ensemble with matching Capezio ankle boots. Examples such as Norma Kamali’s fashionable sweatsuit from 1981 demonstrate the less rigid distinctions between fashion and sport attire during the second half of the 20th century.

Like gymnasium exercise, bicycling was one of the few activities during the late 19th century for which women could wear trouser-style garments. Sporting Life features a circa 1888 woman’s tailored bicycling ensemble, with a divided skirt that was designed for mobility as well as modesty. Bicycling boots from the same period are also on view. Clothing for bicycling changed substantially during the 20th century, as evidenced by a 1985 man’s cycling outfit by Raleigh/Giordana Sport, which utilized stretch materials and streamlined design for maximum performance in competitive racing. A contemporaneous Stephen Sprouse cycling-inspired menswear ensemble with spandex leggings is also displayed. 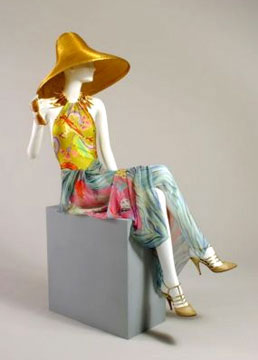 The earliest tennis garment on view in the exhibition, circa 1903, is a two-piece summer ensemble with shirtwaist style blouse and long skirt. By the 1920s, tennis clothing strongly resembled chic sportswear, and in fact, many sportswear designers also outfitted professional tennis players. The exhibition pairs a 1926 silk Chanel dress, with a loose cut and a pleated skirt, with a similar white cotton tennis dress, circa 1926, to illustrate this relationship between sport and fashion. Twentieth-century tennis styles, such as a 1971 dress by tennis star Chrissie Evert for Puritan, have become increasingly streamlined—and a great deal shorter—but the traditional white color remains popular. 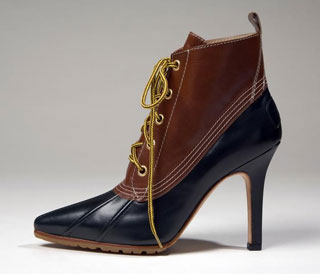 As with tennis, clothing associated with recreational sailing has a strong connection to fashion. The exhibition includes a 19th century red and white, sailor-style ensemble; a Norman Norell sailor dress, circa 1957; and a Stephen Jones sailor cap, from the mid-1980s. In addition, a man’s crew uniform and a regatta ensemble, both from the 1920s, showcases clothing worn for more competitive boating sports.

Garments worn for hunting—one of the oldest forms of sporting activity—must provide protection as well as functionality. The exhibition displays a Norfolk suit, circa 1926, an ensemble which was popular for hunting and outdoor country activities. This relaxed style, first introduced in the 1860s, was constructed to allow for ease of motion. Sporting Life also features a man’s shooting jacket from 1941, which features extra padding at the shoulder for comfort. The practical design of hunting garments has inspired designers such as Yves Saint Laurent and Jean Paul Gaultier, and the exhibition includes examples of their work. Also displayed are a pair of sportswear-inspired Manolo Blahnik high-heeled shoes based on classic utilitarian duck boots.

Many early examples of active sportswear, including garments for swimming, were made of heavy wool. The exhibition features a wide variety of women’s swimwear, ranging from a modest, two-piece wool suit from the 1850s to the body-revealing styles created by designer Rudi Gernreich during the 1960s. Swimwear also has benefitted from the development of new textile technologies, including lastex and spandex, and today’s competitive swimwear has “high performance” functionality. The exhibition includes a swimsuit by Speedo, whose FastSkin FSII designs mimic sharkskin. Also featured are the less functional but highly fashionable swimwear of Christian Lacroix, whose flashy 1990 beachwear ensemble has a coordinating swimsuit, scarf, hat, sunglasses, and shoes. Swimwear’s influence on fashion is also seen in the use of bikini-style tops in fashions by designers Azzedine Alaïa and Halston.

Examining the development of modern skiwear during the 20th century, the exhibition features a wool ski suit, circa 1934, that bears the label “Neva-Wet.” This early attempt at waterproofing now seems primitive in comparison to the high-tech properties of Patagonia’s nylon “Super Alpine” skiwear from 1995. The exhibition also includes a 1999 ensemble from Tommy Hilfiger and Gucci jacket, circa 1995, that are both fashionable interpretations of skiingstyles.

Some synthetic materials most often utilized in active sportswear increasingly are being used in fashion garments—neoprene, for instance, a fabric commonly used in clothing for surfingand aquatic sports. The exhibition displays a neoprene wetsuit alongside a sporty 1994 Donna Karan dress, also made of neoprene.

In addition, the exhibition has sections devoted to golf, skating, horseback riding, motoring, football, and baseball. The exhibition will be on view through November 5, 2011, in the Fashion and Textile History Gallery at The Museum at FIT.