For over two hundred years, ladies’ magazines published color images of the latest fashion styles of the day. Today, antique and vintage fashion prints offer a colorful and in-depth view of the stylish fashions of the past. Their vivid color schemes, exquisite fabrics and decorative trims make a delightful collectible to display.

Collectors can find fashion prints in many places. Antique dealers and art galleries will charge top prices. Secondhand shops, charity outlets and small antique shops sometimes have framed prints hanging on the walls above furniture, often with lower prices. Other inexpensive places to look are frame shops and secondhand bookstores in small towns. Now, with the popularity of the internet, many web sites such as eBay provide a vast variety of antique prints and fashion plates. On eBay, you can skip the auction bidding process if you like and just click “Buy Now.” In need of a gift for a special someone or a special occasion? Hand-colored fashion prints make lovely gifts for fans of Jane Austen novels and movies, Civil War re-enactors, fans of Downton Abbey or the 1920s Boardwalk Empire. 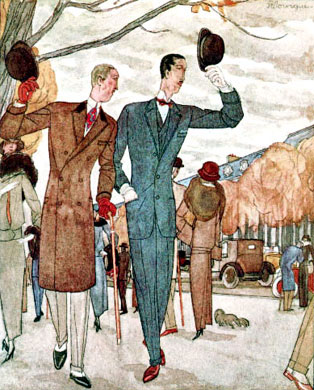 You can arrange a collage of framed prints over a desk, behind a sofa on even in a powder room. Choose prints to match a color scheme, a decorating timeline, or even pick a theme. 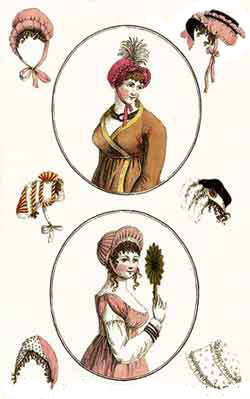 The Journal des Dames et des Modes was a French fashion magazine first published in the late 18th century. Included in their issues were hand-colored fashion engravings depicting the stylish way to dress for every occasion (alas, only for those fortunate enough to be a member of the upper class). The Regency era enthusiast will enjoy these fashion styles of the early 19th century that are portrayed in many of the recent motion picture adaptations of Jane Austen novels. Don’t forget the men … men’s regency clothing was also featured in period magazines. With hand-colored prints of gentlemen’s fashions you can discover the appropriate styles for early 19th century morning attire, walking costumes, and evening fashions. 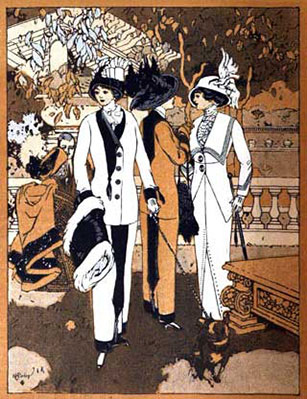 This period television drama series explores the lives of the British Crawley family and the estate’s many servants from the day after the sinking of the RMS Titanic in April 1912. Prints of Titanic era fashions are also very popular for those interested in the infamous ship’s sinking. During this period, the French magazine Gazette du Bon Ton provided exquisite fashion plates created by modern artists such as Paul Iribe, George Lepape, Georges Barbier, Charles Martin, Pierre Brissaud and others. Marketed towards the Paris elite, prints of exclusive and trend-setting fashions appeared in limited editions. Many designs were idealistic leisure scenes of the well-to-do (including the races), illustrating the latest creations of Paris fashion houses such as Worth, Lanvin, Doucet, Poiret, Callot Soeurs, Paquin and Beers. Each fashion pochoir (stencil) print was hand-painted in vivid colors on handmade paper, thus, Gazette du Bon Ton is one of the most desired period fashion magazines for collectors. Season 4 of Downton Abbey is set in the 1920s and features these 1920s designer fashions. 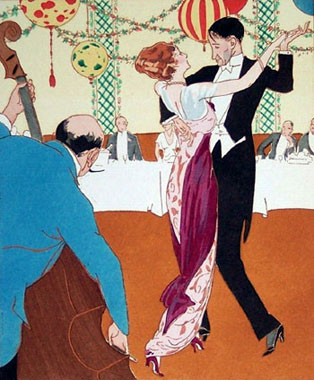 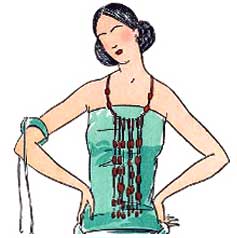 This American period drama is centered on the 1920s Prohibition period and the era of the flapper. The majority of the costume designs featured here are of the lower and upper middle classes of society, unlike the elite couture of Downton Abbey. Pictures of these styles can be found in vintage issues of The Ladies Home Journal or Sears catalog. Don’t forget the flapper … she showed disdain for conventional dress and behavior; wore her hair bobbed, used rouge and lipstick, and even plucked her eyebrows!  The flapper girl dressed in fringed skirts and bright colored sweaters; she wore scarves and blouses with Peter Pan collars. Colorful prints of the flapper dress style can add a fun atmosphere to any framed print arrangement. Moreover, the boardwalk beach scenes provide colorful examples of the bathing suits of the 1920s, a fun collection to display in a beach or cottage style house.

It was in the early 1800s that people began to flock to the beaches for seaside amusement; along with this new outdoor pastime came the need for a stylish garment for the seaside or beach. There were varieties of style and color in turn-of-the-century bathing suits. Women typically dressed in black, knee-length, puffed-sleeve wool dresses, often featuring a sailor collar, and worn over bloomers or drawers trimmed with colorful ribbons and bows. The bathing costume was typically accessorized with long black stockings, lace-up bathing slippers, and fancy caps. 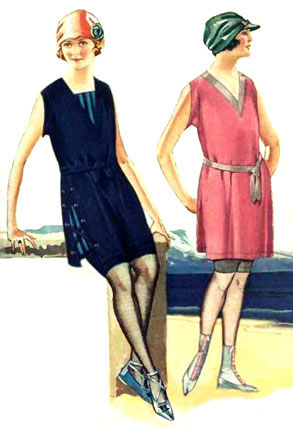 In the 1880s, cycling became a fad of major proportions in both the United States and Europe. By the 1890s, the “The Golden Age of Bicycles” had arrived. Bicycling clubs for both men and women flourished on both sides of the Atlantic, and touring and racing were the rage. Leggins, hat, gloves, tie—even the chatelaine bag—would match the costume.

Furthermore, women who enjoyed the game of golf had a variety of fashions to wear on the golf course. Step back in time when women dressed in long skirts, lacy blouses and wide brim hats on the golf course and display an array of colorful sporting clothing fashion prints. 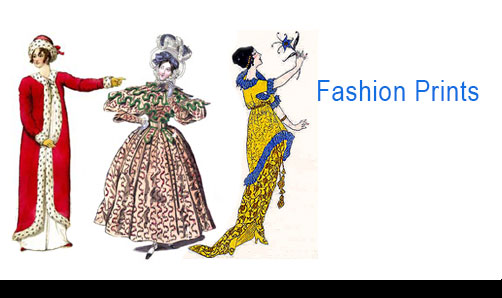