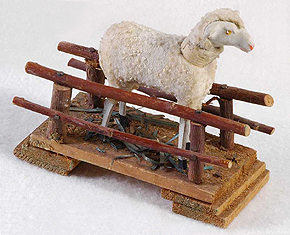 Weeks before the Christmas holidays, the children in 19th century Bethlehem, Nazareth, and other Moravian communities along the Lehigh River in Pennsylvania, made up little parties to go on expeditions in search of moss, ferns, gravel, and bright-hued stones to be used in Putz building. These excursions constituted one of the most enjoyable features of an old custom. 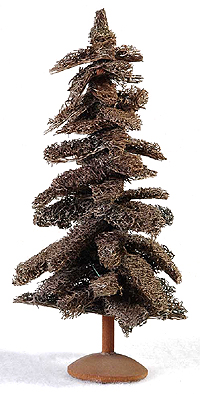 turn-of-the-century rare Putz luffa tree; an ideal Putz accessory for a wide variety of items, from farm buildings and animals, to houses. Luffa (a natural fibrous product made from a gourd) was used in the early Putz scenes of the same era way before bottlebrush trees became available. [Courtesy of Dresden Star Ornaments]

A Putz was a Pennsylvania-Dutch miniature landscape, with varied figures, structures and animals. Some of these scenes were made on a grand scale; but smaller ones, equally pretty, and not so difficult to manage, were arranged at the foot of the Christmas tree. The tree was placed on a table, or, better still, was set in a large dry goods box with boards placed across the top of the box, as a foundation for the Putz.

The Moravian Putz probably had the same origin as the Christmas crib that was set up in Roman Catholic churches at Christmastide. The latter is a more or less elaborate embellishment representing the stable at Bethlehem, with figures of the Virgin and Holy Child, St. Joseph, the three kings of the Orient, an ox, a donkey, sheep, and shepherds. The custom of erecting cribs in churches began during the thirteenth century in the Franciscan order; even today Christmas cribs are found in many Catholic houses.

The Putz is the same idea secularized, and probably originated in Germany—the source of many good old Christmas customs—at the time of the Reformation. The Moravians brought the custom of Putz building from the fatherland on their immigration to America, and continued the tradition through passing generations. It is probable that on Christmas Eve, 1741, when Count Zinzendorf, named the Moravian settlement on the Lehigh, Bethlehem, a Putz adorned the little log building in which he and his brethren were first assembled. 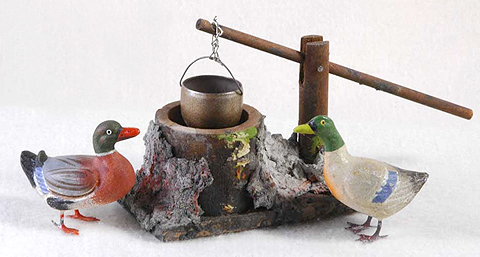 Well bucket and ducks were made in Germany in the early 1900s. Fantastic little well actually works when you move the wooden handle! You can move the handle to raise and lower a metal bucket attached by a chain (chain looks like a newer replacement). The two Putz ducks are composition with metal feet.  [Courtesy of Dresden Star Ornaments] 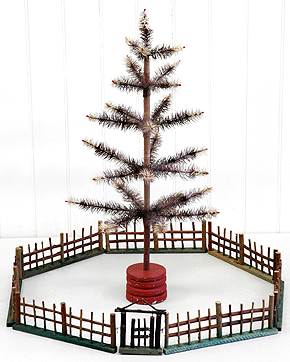 The first step to create a Putz was to go into the woods for the materials. Pieces of rock, large and small, mosses, ferns, lichens, and vines were gathered. The large rocks were used for mountains, interspersed with small branches of cedar and pine for trees. A narrow piece of tinfoil, bent into various shapes, was used for a waterfall, across which a cardboard bridge was laid. Below the waterfall, a looking-glass lake, or, better still, a tin pan, filled with water, on which artificial ducks, geese, fish, and boats could float was added. The edge of the glass or pan was concealed with moss; and gravel was scattered at the bottom of the lake, as well as on the winding walks around it.

Cardboard houses, twig fences, miniature livestock such as sheep and horses were added to the scenes. The decorations were generally prepared in a room that was kept carefully locked and mysteriously darkened, which enhanced the delight and surprise when the time arrived for the display.


Eight-piece German rustic twig fence is used to set off a small Victorian tree and/or Putz display. The fence hooks together to form any configuration you choose, and has a little opening gate. [Courtesy of Dresden Star Ornaments] 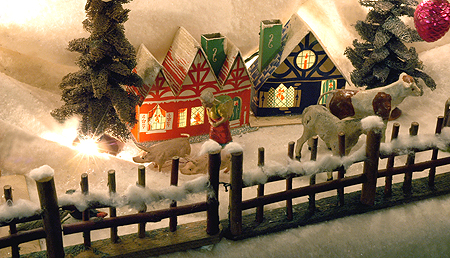 As it was the custom in Bethlehem to visit the Putzes in the evening, the greatest care was taken in their illumination. Some of them were especially designed for charming light effects. If the scene represented the stable in ancient Bethlehem, the Putz builder often put behind it a painted transparency depicting a town overarched by a starlit sky. By the proper arrangement of lights behind this back piece, the windows in the distant houses sent forth cheering rays, and the stars glittered in the firmament. 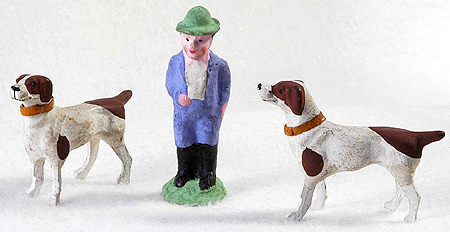 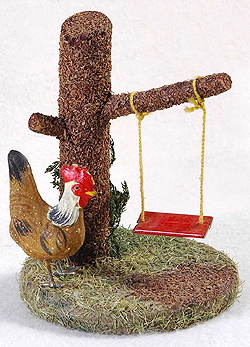 The people of Bethlehem, since the earliest times, used wax candles in their illuminations. They were molded in the old Moravian drug store of Simon Rare & Co., which was established in the 18th century; and at every Christmastide they were in great demand both in town and country. The drug store also provided the candles that were placed in the hands of the little children during the services on Christmas Eve at the Bethlehem Moravian Church.

On Christmas Eve, the great "Putz" viewing evening, the Moravian children formed little bands and went from house to house to see these beautiful displays and often to interchange presents. In the early nineteenth century it was the custom of the farmer boys and their rosy-cheeked sweethearts who lived in the vicinity of Bethlehem, to come to town on this evening to join in the sightseeing. By the end of the century, the custom of Putz building was taken up by churches of every denomination in the country, and even the farmers themselves followed the custom. 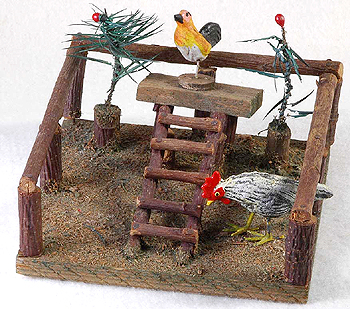 In the Moravian Church at Bethlehem the Christmas embellishments were always on a grand scale, and the services for the children on Christmas Eve were especially attractive. At the afternoon feast and at the evening events, all the infants and little children were presented with lighted wax candles, emblematical of the newborn Christ, the Light of the World. Beautiful paintings of the Nativity were conspicuously displayed in the pulpit recess, surrounded by masses of evergreens arranged in a variety of fantastic forms. The singing of Christmas carols to the accompaniment of the trombone choir was an impressive feature of these services. 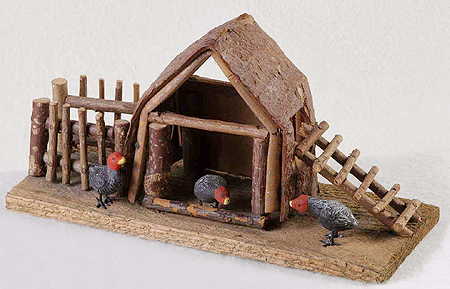 Early 1900s German Putz hen house with baby turkeys. The Putz baby turkeys are wonderfully detailed, and are composition with metal feet. The Putz hen house has a wood bark roof, three different entrances, wood base, and a twig ladder with side fencing. [Courtesy of Dresden Star Ornaments]

In the Moravian Seminary and College for Women at Bethlehem (originally the Bethlehem Female Seminary) the custom of building Christmas Putzes in each classroom was repeated annually since the founding of the institution in 1749. This old edifice served as a military hospital during the Revolution, and it is probable that the Moravian Sisters celebrated Christmas in the rooms occupied at that time by the sick and wounded. During Christmas week in the 1800s, the seminary was open to visitors from Bethlehem and the neighboring towns, who came to inspect the Putzes and to admire the paintings which were also on exhibition.

Images Courtesy of Dresden Star Ornaments www.victorianornaments.com : What could be a more fun addition to your Christmas decorating than some antique and vintage accessories for under the tree! Dresden Star Ornaments has some great Putz items you can use to make your own under-the-tree Christmas garden, in true Pennsylvania-Dutch style. Choose from a wonderful assortment of Putz farm animals, people, wishing wells, chicken coops, houses and more!