Damsels in distress, knights in shining armor, and tales of love and adventure – these notions of chivalry have shaped popular understanding of the Middle Ages. Artwork from the period reveals that chivalry, first developed as a model code of conduct for the medieval knighthood, eventually permeated almost every aspect of aristocratic culture. The J. Paul Getty Museum’s exhibition Chivalry in the Middle Ages, on view until November 30, 2014 at the Getty Center, demonstrates how manuscripts of a variety of genres, ranging from romances to hunting treatises, played a central role in promoting the tenets of chivalry. Lavish illuminations like those shown in the exhibition contributed to the magnificence of the court and the visual splendor of elite life. 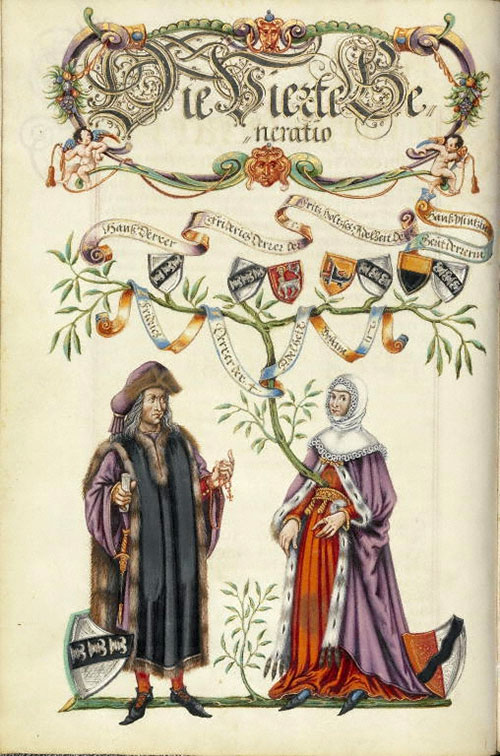 “The concept of chivalry is one that many of us are familiar with from our younger days when we read tales of King Arthur and Robin Hood,” explains Timothy Potts, director of the J. Paul Getty Museum. “The manuscripts on view in this exhibition, all from the Getty’s extraordinary collection, both illustrate, and themselves formed a part of, the refined rituals and vibrant lifestyle of the aristocracy in the Middle Ages. Not only were the texts and images of chivalric manuscripts entertaining, but they also the most vivid manifestation of the ideal courtly world for noble readers to explore and emulate.”

Telling of heroes’ exploits in life and love, romances were among the most cherished illuminated texts of the Middle Ages. Their popularity was in large part due to the captivating images of lovers exchanging amorous letters, arranging furtive trysts, and strolling arm in arm on wealthy estates. These tales typically focused on a young knight’s adventurous pursuit of an aristocratic woman who was already married or promised to a high-ranking nobleman. The knight would perform brave and honorable deeds to become worthy of his lady’s esteem, and – because the nature of the affection was often secret – their devotion would stand apart from worldly concerns. 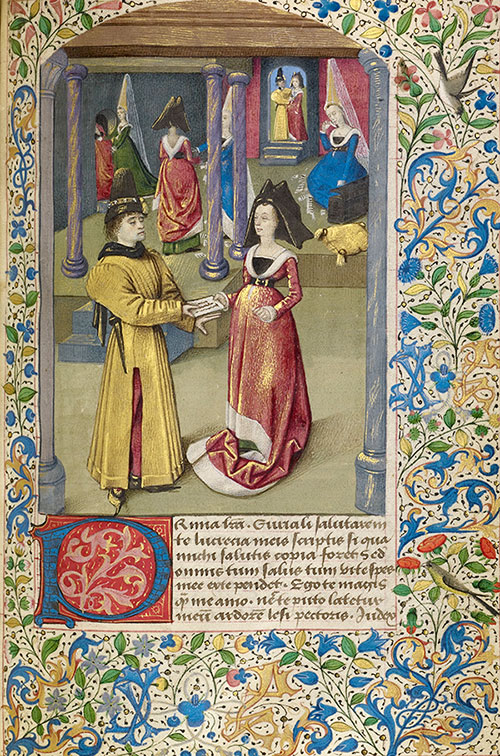 Euryalus Sends His First Letter to Lucretia
This miniature portrays the deception and secretive communication necessary to an illicit love affair. It introduces the story of the adulterous passion between Euryalus, a member of the court of the Holy Roman Emperor, and a married Italian woman, Lucretia. In front, Euryalus presents his love letter to Nisus, a trusted go-between.  [Unknown French, about 1460 – 1470 Tempera colors and gold paint on parchment 6 15/16 x 4 1/2 in. MS. 68, FOL. 30, JP Getty Museum]

“The best-known tales of courtly love are those involving the knights of the Round Table,” says Melanie Sympson, former Getty graduate intern and curator of the exhibition. “One 14th-century image in the exhibition shows the knight Tristan escorting the princess Isolde to her marriage with his uncle, King Mark. Along the way, Tristan and Isolde drink a love potion that causes them to fall madly in love, placing Tristan in the difficult position of choosing between the chivalric duty he owes his overlord Mark and the intense longing he feels for Isolde.” 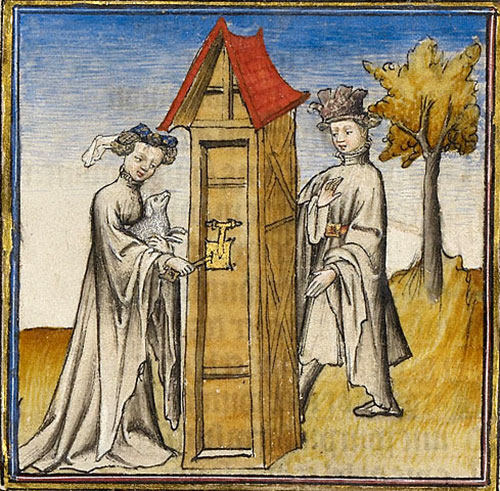 The Romance of the Rose tells the story of a lover who dreams of a beautiful rose kept captive in a castle. The rose represents the object of romantic love; allegorical characters in the story, such as Courtesy, Youth, Fear, and Idleness, either help or hamper the lover’s attempts to win the rose. [Unknown French, Paris, about 1405 Tempera colors, gold leaf, and ink on parchment bound between pasteboard covered with dark red morocco 14 5/8 x 10 1/8 in. MS. LUDWIG XV 7, JP Getty Museum]

One of the Getty’s newest manuscript acquisitions, Lieven van Lathem’s Romance of Gillion de Trazegnies (after 1464), demonstrates the rewards of chivalrous behavior. The scene on view is of the marriage between knight Gillion de Trazegnies and his bride, Marie d’Ostrevant. The marriage was a reward to Gillion by Marie’s father, the Count of Hainaut, for the young knight’s loyalty and virtue. However, in a trope typical of romances, nefarious villains conspire to separate the couple. At one point, Gillion is tricked into thinking that Marie is dead and marries another woman.

In the Middle Ages, chivalric customs surrounding food and feasting distinguished the nobility from commoners. Courtly feasts were held to celebrate holidays or special events such as weddings and knighting ceremonies. Sumptuous banquets elevated the everyday activity of eating into splendid affairs, allowing nobles to demonstrate their generosity and refinement. Manuscript illuminations commemorated not only these medieval hunts and festivities but also represented banquets from classical antiquity and the Bible with the same trappings of contemporary elite culture.

In A Hunter and Dogs Pursuing a Fallow Deer (about 1430-40) and Hunters and Dogs Pursuing a Wild Goat (about 1430-40), well-trained hounds chase a stag while eager archers aim their crossbows at a wild goat below them. These illuminations appear in the Book of the Hunt, the most popular hunting manual of the Middle Ages. Biblical subjects could also be given the chivalric touch, as in a depiction of The Writing on the Wall at Belshazzar’s Feast (about 1400-1410). The Old Testament tale is visualized as a medieval king’s banquet, complete with musicians who entertain the group as they dine in luxury. 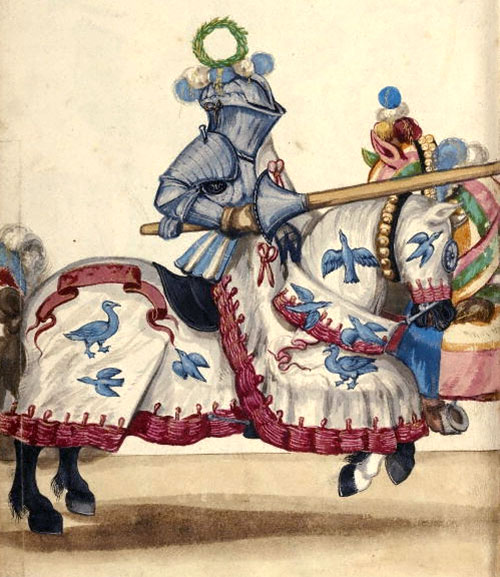 For the medieval nobility, games and tournaments were more than entertaining pastimes. Learned from a young age, aristocratic activities such as chess, swordplay, and sports were part of a broader education in acquiring skills of strategy, strength, and dexterity, as well as abstract qualities of courtesy and fairness. Tournaments were among the grandest and most important contests in the later Middle Ages, with jousts becoming the highlight of festivals that could last for several days. Elegant images rendered by medieval artists provided visual instruction in competitive techniques and commemorated events of historical significance.

In Initial E: An Equestrian Duel between a Creditor and a Debtor (about 1290-1310), a man who has borrowed money disputes the charges of his creditor. The sum owed by the debtor is significant, and, by order of the king, he is required to challenge the creditor to a duel. This manuscript contains the only known copy of the law code of Aragon ordered by King James I, which includes aspects of a chivalric culture such as the judicial duel. In a less bloody demonstration of game play, a layout of chess problems from the late 1300s presents different strategies and the sequence of moves required to checkmate an opponent.

Chivalry in the Middle Ages is on display until November 30, 2014 at the J. Paul Getty Museum, Getty Center.