To be considered accomplished in Regency England, a young gentlewoman must be proficient in playing an instrument and singing. Evening entertainments often featured a display of the musical talents of the young ladies in attendance. 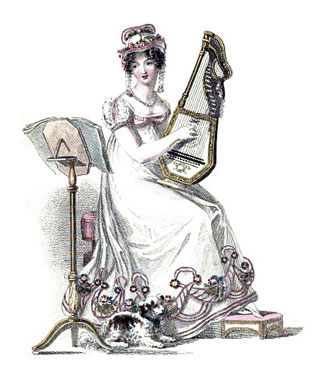 The pianoforte, a version of the piano, is prominent in many of Jane Austen’s novels. Elizabeth from Pride and Prejudice continually shies away from any public demonstration of her musical skills on the pianoforte, saying, “My fingers do not move over this instrument in the masterly manner which I see so many women’s do. They have not the same force or rapidity, and do not produce the same expression. But then I have always supposed it to be my own fault— because I would not take the trouble of practicing.”

In Sense and Sensibility, Marianne Dashwood is accomplished at the pianoforte and finds solace in playing. “The pianoforte, at which Marianne, wrapped up in her own music and her own thoughts, had by this time forgotten that anybody was in the room besides herself…” Referring to Barton Cottage, Marianne declares, “I know we shall be happy … I shall divide every moment between music and reading.”

Mrs. Cole, in Austen’s Emma, tells of the pianoforte at the Bates’, “…a very elegant-looking instrument, — not a grand, but a large-sized square piano-forte … this piano-forte had arrived from Broadwood’s the day before…” 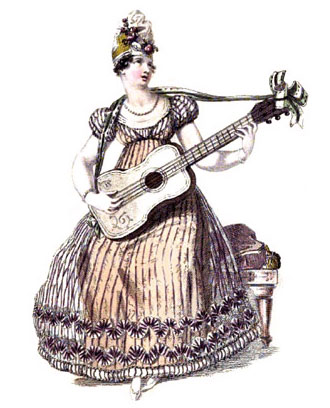 During the Regency Era, England was the center of pianoforte manufacture. In 1812, “The Repository of Arts, Literature, Commerce, Manufactures, Fashions and Politics” described pianofortes as “instruments of refined entertainment … an indispensable article for apartments…”  They featured a hand-colored print of a pianoforte from the extensive variety in the stock of Messrs. Wilkinson and Wornum of Oxford Street. The elegant instrument was six to seven feet in height, three feet nine inches wide, and twenty-one inches deep. This pianoforte was finished in mahogany and highly ornamented but was also available in rosewood and brass. “For touch, it is unrivalled, and in its adaptation to the voice, it is extremely happy, particularly that with two unisons or strings to one note.”