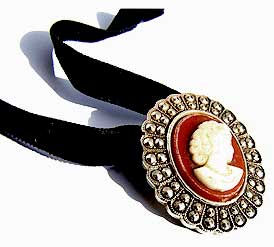 The Egyptians were the first to practice cameo-cutting, and specimens both of cameos and intaglios with depressed figures were often found in the tombs of the Pharaohs. In the late 1850s a new caprice of fashion brought cameos again into favor, and for decades the demand for them increased every year. The process for cameos is one that demands great skill and care, while it is extremely slow and laborious; and it is not strange that finely cut cameos rival in cost the choicest diamonds, which, sparkle as they may, can never hold their place against works of art.