Transport yourself back to the 19th century where beautiful outfits fashioned by seamstresses and shoemakers supplied the privileged with enviable ensembles. Swathed from head to toe in expensive garments and shod in delicate footwear, fashion-forward women graced the boulevards and the ballrooms with their colorful presence. Their tailored male companions cut equally refined figures in their black coats, spotless white linens, lustrous top hats and shiny boots. Yet presenting an elegant exterior was not without its perils … the Victorians suffered for their brilliant arsenic gowns and flammable crinolines. 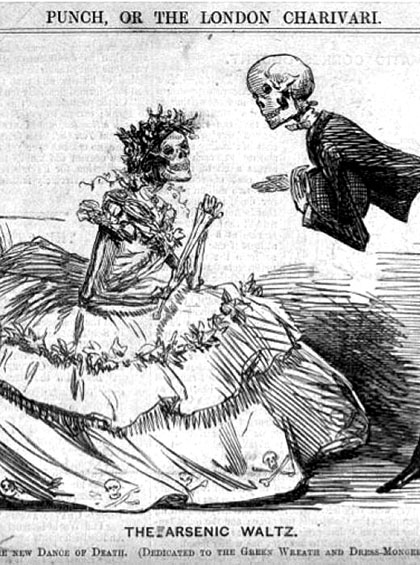 Toxic dyes and mercury-laced hats, the exhibit looks at the dark side of fashion. Two skeletons dressed as lady and gentleman in “the Arsenic Waltz,” Etching (1862) (courtesy Wellcome Library, London)

The discomfort of constricting corsets and impossibly narrow footwear was matched by the dangers of wearing articles of fashion dyed with poison-laced colors and made of highly flammable materials. From the challenges faced by those who produced fashionable dress to the risks taken by those who wore it, the Bata Shoe Museum exhibition, Fashion Victims:  The Pleasures & Perils of Dress in the 19th Century,  provides thought provoking insights into what it means to be a fashion victim. 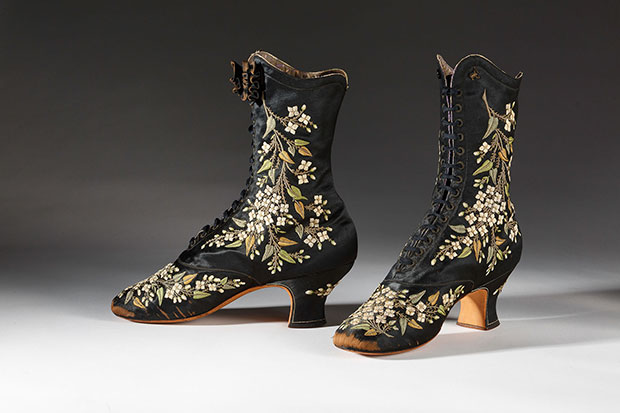 Victorian Shoes: François Pinet, French, late 1870s – early 1880s. François Pinet manufactured some of the most exquisite footwear worn by the most elegant during the second half of the 19th century. Much of his footwear was factory‐made but he also employed seven hundred embroiderers who labored in less than comfortable conditions creating botanically accurate floral embroidery. [Image credit: Collection of the Bata Shoe Museum. Image (c) Bata Shoe Museum, Toronto, Canada. Photography by Ron Wood. CNW Group/Bata Shoe Museum]

Curated by Elizabeth Semmelhack, Senior Curator, Bata Shoe Museum and Dr. Alison Matthews David, Associate Professor, Ryerson University and building on Dr. Matthews David’s research into the dangers of dress in the 19th century, this exhibition explores a wide variety of pleasures and perils associated with fashion. In addition to highlighting exquisite examples of footwear and clothing from the 19th century, the exhibition also explores many of the often untold stories related to fashion and its production.

Included in the exhibition are the dangers of dresses and shoes dyed arsenic green, the plight of mad hatters and mercury poisoning as well as the effects of constricting corsets and impossibly narrow footwear.  The exhibition also looks at shifts in the making of fashion from independent craft to fragmented labor completed in garrets or on factory floors. The move from traditional shoemaking to factory-made footwear is also emphasized as is the role of those workers who were integral to the presentation of the fashionable figure from the seamstress to the shoeshine boy.

Featuring over ninety artifacts from the Bata Shoe Museum’s extensive holdings augmented by loans from private collections the exhibition highlights dresses that span the century, mauve-hued footwear dyed with the first coal tar colors invented in 1856, beautiful hand-embroidered boots manufactured by the exclusive Parisian shoemaking firm of Francois Pinet, impossibly narrow Adelaide boots and gloves worn by Empress Elisabeth of Austria and a corset with a sixteen-inch waist from the Cleaver/Suddon collection. Fashion Victims:  The Pleasures & Perils of Dress in the 19th Century will be on view until June 2016. 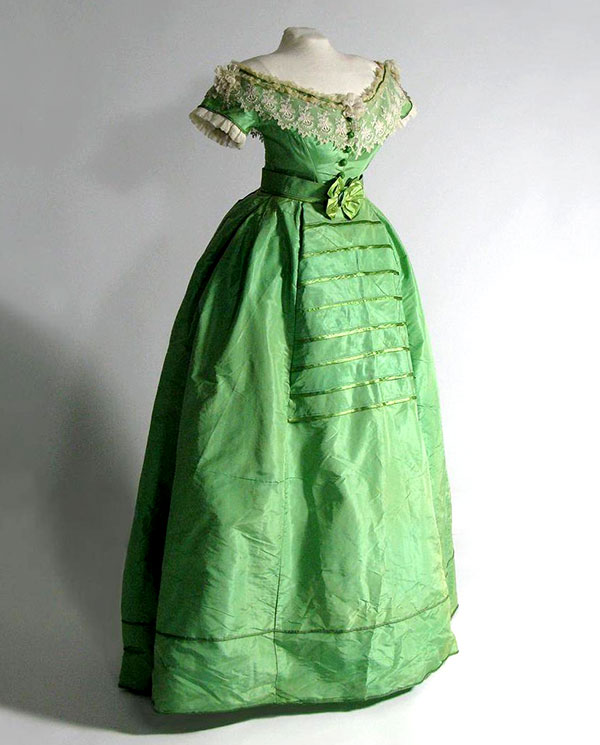 “Emerald Green” dress colored with arsenic, English or French (c. 1860–1865) The Victorians suffered for their brilliant arsenic gowns and flammable crinolines. The green of the shimmering silk, now slightly faded, was one of the Victorian era’s most fashionable hues; people, mostly women, wore it even after it was widely known that the arsenic-based dye responsible for the color could lead to horrible physical suffering and early death. The prime risk was for the wearer who would sweat and absorb it. But the dangers of the dye didn’t end there: They extended to a long chain of people, from factory workers to seamstresses to fellow ball-goers.  [Image credit: Collection of Glennis Murphy, photograph Arnold Matthews] 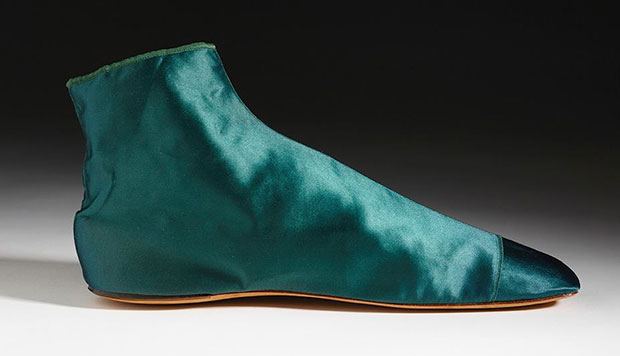 Adelaide boots, European, c. 1840s: The dark green satin used to make these “Adelaide” boots tested positive for arsenic-based dye. Their deep color was just one of the many shades of green that were being produced in the 19th century using arsenic. [Image credit: © 2014 Bata Shoe Museum, Toronto, Canada. Photography by Ron Wood) 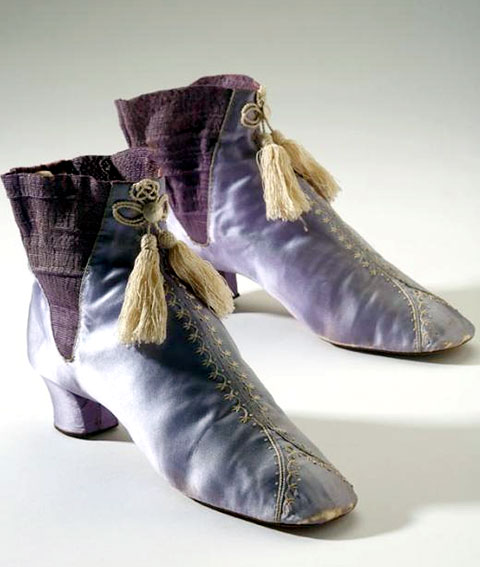 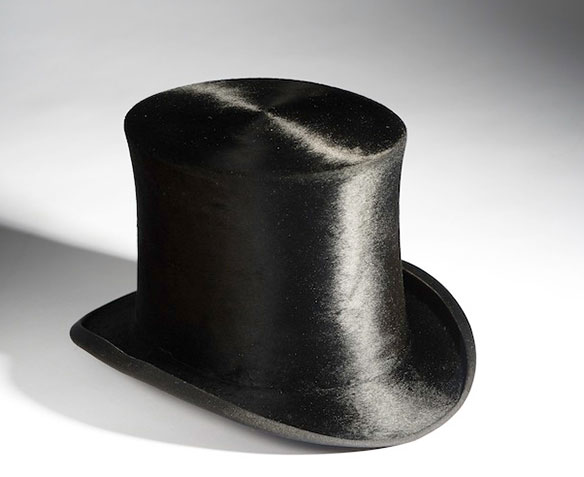 Beaver fur hat, still containing amounts of Mercury, Swiss (1885–1925). The desire for beaver fur hats in European men’s fashions dates back centuries and spurred the development of the 17th century North American fur trade. However, it was not until the 1730s that mercury began to be used in the making of beaver top hats. This hat, which dates to the end of the 19th century, still contains small amounts of mercury. [Image credit: Collection of the Bata Shoe Museum. Photography by Ron Wood] 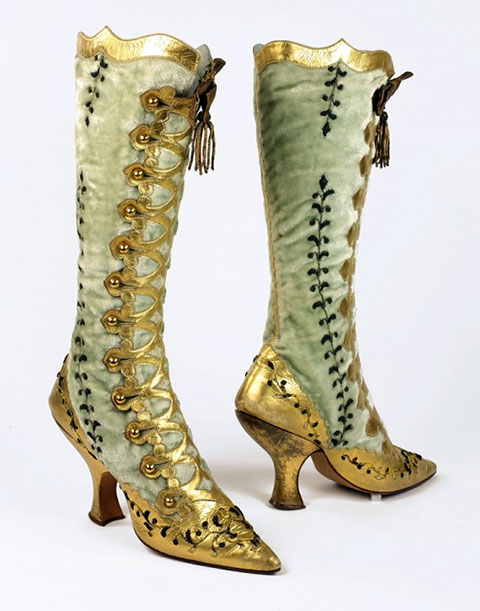 Button Boots, Swedish or German, c. 1890s: This pair of handmade, bespoke button boots reflects the infusion of erotically charged references in women’s dress that emerged at the end of the 19th century. These boots were designed to look like a stockinged leg in a shoe. Although the majority of the calf‐hugging shaft and elaborate gold kid appliqué would have been hidden under their wearer’s skirt, any glimpse would have tantalized the onlooker. [Image credit: © 2014 Bata Shoe Museum, Toronto, Canada. Photography by Ron Wood] 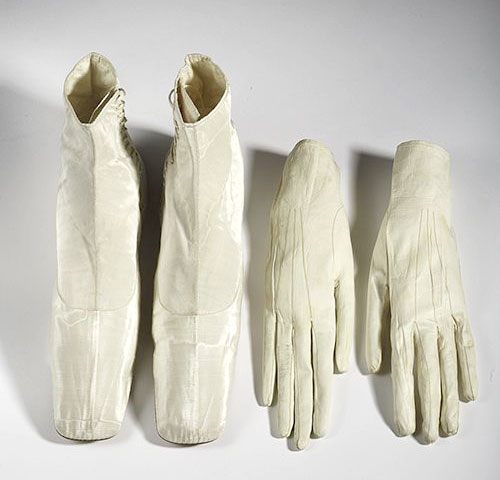 Gloves and Shoes, Austrian, 1850s. Empress Elisabeth of Austria was considered by many to be the most beautiful woman in the world in the 19th century. Her long hair and slim figure attracted the attention of many, setting the standard for constricted beauty and became an obsession for her. This pair of almost impossibly narrow Adelaides and gloves were given as a gift to Colonel Louis de Schweiger, one of her many admirers. [Image credit: © 2014 Bata Shoe Museum] 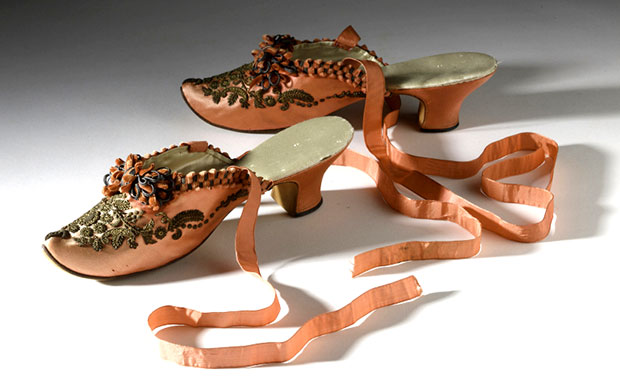 Boudoir slippers with destabilizing heels, French (1880–1885): The high heel was reintroduced into Western fashion in the late 1850s as part of the nostalgia for the 18th century dress that captured fashionable imaginations of the period.  Along with this interest in 18th century came the specter of the licentious woman, this pair of boudoir slippers which features many hallmarks of 18th century mules, would have been perfect for this highly charged image of femininity. [Image credit: © 2014 Bata Shoe Museum, Toronto, Canada. Photography by Ron Wood] 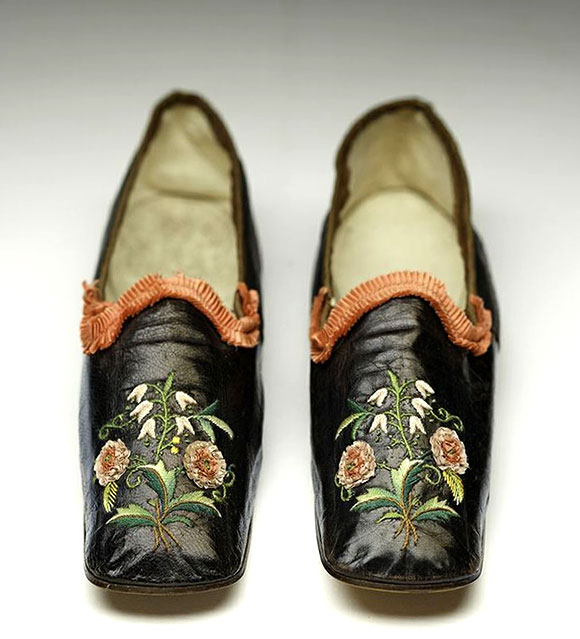 French Shoes, late 1840s. The fashion for straight shoes was advantageous to shoemakers. Without the requirement to makes shoes with lefts and rights, shoemakers only needed a single last per shoe size. [Image credit: © 2014 Bata Shoe Museum]