Wallpaper for the 1900 House 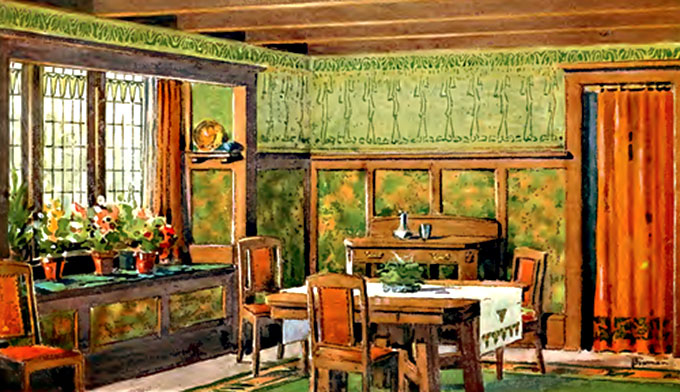 The prime desire is to select a wallpaper that shall be in harmony with the main purpose for which the room itself is destined. You would not, for instance, think of mounting the same style of wallpaper on dining, living and bedroom walls alike. Let us take a typical early 1900 house, the original residence of a family belonging to the upper middle class. What rooms will it contain and how shall they be papered?

There will be an entrance hall, of course, dining room, living room, and morning room, master bedroom and two or three other bedrooms, a nursery probably, besides the kitchen and a bathroom. All will require papering, or re-papering at one time or another.

For the main rooms of the 1900 house, there are various alternative decorative methods available. Paint is one; marble-and-varnish another; a plain self-colored wallpaper is a third; whilst a patterned wall covering makes a fourth. All have their good points to recommend them, and each may possess the defects of its good qualities. You can use a virtual room painter to see what looks best beforehand. 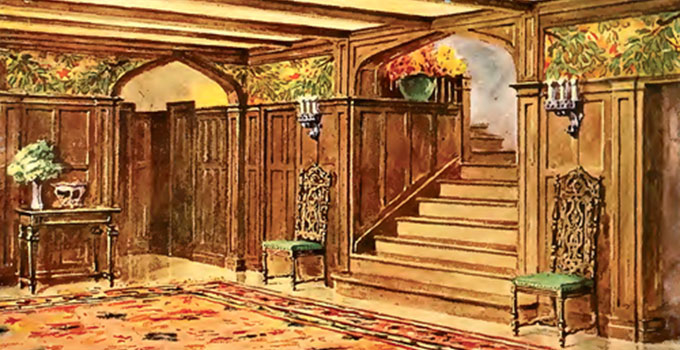 First we will consider paint. It may be said that if the hall be not a large one, and therefore, not of prime importance in the internal decorative scheme, paint, of some light but pretty tint (pale pink, cream or mustard yellow) will look well, and form a pleasant background to any flower vases, pictures, etc., that may be placed here. But you have always to remember that paint is but a single tint at best, and can suggest nothing at all to its surroundings. So, unless there are many brightly colored rugs to strew about and colorful flowers readily obtainable, plain paint is difficult to recommend.

Next we will consider marble-and-varnish. During the Victorian 1870s, or thereabouts, the marble-and-varnish effect was the one seen in the hall and passages of seven houses out of any ten, and nobody at that time seemed to think anything else was either possible or necessary. It had a neat, if cold, appearance, and that is about all that could be said for it, whilst it certainly made a smallish entrance look smaller still. This style of mural decoration can safely be dismissed from further consideration. 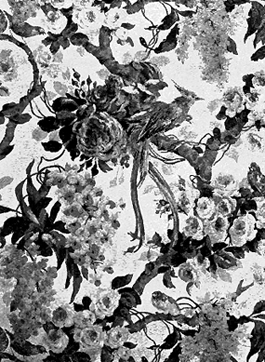 Next to come under discussion is the self-colored wallpaper, and to a certain extent the remarks made in regard to paint apply to this medium also. A wallpaper will always look a shade or two warmer than paint of the same tint, but otherwise there is not much difference between them beyond this -- that paint soils much the more easily of the two. So we may leave the self-toned wallpapers out of count as well.

There remains a "patterned"  or printed wallpaper to consider. Now we will postulate in the first place that there are few or no pictures on the walls here, while there is a fairly large surface to be covered. Obviously what is needed is a printed wallpaper having a somewhat bold design in the brightest colors. The hall should, in our opinion, always be a part of the house that can be "sat in" on occasion and it should look comfortable consequently. Bright colors on the wallpaper are quite admissible, therefore, especially if the light be not too good. A handsome frieze looks well, too, though one would avoid a dado. But color, anyhow, and if possible something original in the way of a design, since first impressions count for much with visitors. One of the charming William Morris designs or Walter Crane wallpapers would give an admirable appearance here. 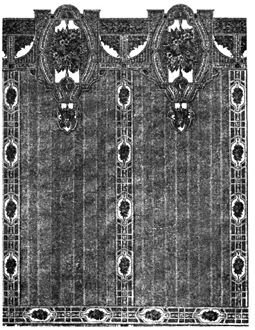 The beautiful "panel" wallpapers of the period are worth a special mention. A set of designs showing peacocks among flower blooms is an example of magnificent color scheme and treatment. Another example used during this time showed storks sailing down a white-grounded paper to alight upon the flowers beneath. Any house owner would have delighted to paper their hall with either.

Quite a different decorative effect is wanted for the dining room walls. Here you have a room set apart for a definite and distinctive purpose -- that of replenishing the inner man. No marked extraneous influence should be present to deflect him from that purpose. So the dining room wallpaper, while warm and cheerful, should contain nothing startling, nothing on the "showy" side, in either in color or design. A pleasant Indian theme relieved by an artistic wainscoting or dado looks as well as anything, especially if there be a few good pictures on the walls. If the room be a large one, a dullish pattern of scroll work in low coloring will look well. But in any case, there should be no outstanding feature in the design to distract attention from the serious business of eating that is the room’s purpose. Naturally, if the home has low walls, no dado will be needed, as this would make them appear lower still. The paintwork about this room should be in clear contrast to the paper.

Next in importance is the drawing or living room. Here the decorator may let himself go to any extent, provided cost is not a particular object to the client. Just as a subdued plain wallpaper is the thing required for the dining room, so for the living room a light, gracefully patterned and tinted wallpaper is the first choice. There are very many well-known and charming styles of living room wall coverings, many of them French in character. The "Empire" is one of the most pleasing, perennially popular alike for the grace of its outlines and the delicacy of its coloring. The pattern is too large, however, for any but a big room.

In a drawing room or living room of small dimensions a "Chintz" printed wallpaper will look extremely pretty, particularly so if the chair and ottoman coverings are of a pretty bright chintz pattern likewise. Pains will of course be taken to see that wallpaper and furniture coverings "tone" one with the other. Again, the invariable artistic rule must be studiously observed of mounting a wallpaper with a smallish pattern in a low-ceilinged room, or if "stripes" are employed these must be vertical and not horizontal. Paneled papers, of whatever kind, are only for very magnificently sized rooms.

For the morning room, a pretty cheerful printed wallpaper with a simple pattern on it is the obvious thing. Here, again, the tone of this will depend entirely upon the amount of sunshine that the room enjoys. If it has the advantage of the morning and midday sun, then the wallpaper may be a trifle darker than in the other case. But it should never be very dark and should always have a cheerful design with some light tints in it. A wallpaper having a white or pale pink ground with a pretty floral design in some fairly bright color or colors will always give satisfaction to the users of such a room. Some people "panel" their morning rooms in imitation of ornamental woodwork. Paneling always imparts a serious, not to say somber, tone to a room even though it may be intrinsically artistic. For library walls there is nothing more appropriate. The library is intended for a serious use, and paneling in imitation of cedar or oak looks admirable upon its book-shelved walls. But the whole day's tone is undoubtedly caught from one's temperamental attitude in the earlier hours of it, and, since these will doubtless be spent in the morning room, the wallpaper here ought surely to reflect a cheery optimism.

The question of the wall decoration of the main floor rooms having now been settled, we turn our attention to the rooms in the upper stories of our 1900s house. Here will begin with the bedroom of “Madame.” Daintiness should be the keynote of the paper on its walls, and for no kind of room have more beautiful wall coverings been designed. The range is limitless, indeed, and the bedroom pattern books are things to linger over lovingly and longingly. Some of the most charming designs are still the "stripes," the pattern in many of them being carried out in a lattice-work of flowers and foliage, giving a ravishing effect of loveliness. In others, replicas of the old, but ever pleasing "Empire" styles are seen, and these are always in admirable taste.

For the bedrooms, principal and secondary, lightly tinted and cheery printed wallpapers are a good choice. Among the prettiest of the bedroom wallpapers are the "stripes." There is nothing that looks better in a room than this charming style, with its gay floral pattern and clean chintz effect. They are not usually the most expensive either. Panels imply a very large room and even then the effect is often liable to be unpleasing. The panels are perhaps best used when the bed itself is placed in an alcove. Perfectly plain wallpapers should be avoided for bedrooms, even with a pretty frieze or dado. They have a habit of dirtying quickly and, further, take dust and grime from any clothes which may at times be hung against them. 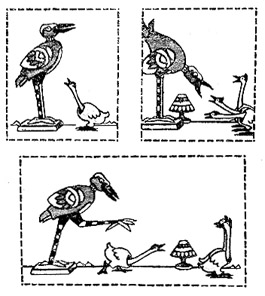 Now for the nursery or child’s room; this room is certainly one of the most important rooms around the house, and one not too easy to wallpaper satisfactorily. In the Victorian era, people did not bother themselves much about the paper for this room. Pretty nearly anything was considered good enough "to do" for them. But that was a grievous pity, for it starved the sense of taste of the youthful occupants at their most impressionable age. Fortunately, in the 1900s, parents saw reason in this regard and took the same care in selecting pretty and typical papers for these rooms as for any others. It is only very right that they should do so, too. Think for a moment how, when you were a youngster, you came to know every smallest detail in the nursery wallpaper by heart. Each curve or square, every dot or diamond in the pattern, was as familiar to you as your own face, and indeed the "faces" made by odd bits of the pattern and "repeated" along the walls were probably much more familiar than that.

By the turn-of-the-century, the utmost efforts of the designer were lavished on the nursery wallpapers. In some of the designs would be the dear old "nursery rhymes" pictorially illustrated to make a dado; in others you could follow the procession of the animals in Noah's Ark as they marched around the room. Then the little Dutch girl-and-boy figures were capital: so were the farmyard friezes. Laid in broad flat tints they looked quite splendid, and their educational value from an artistic standpoint cannot be doubted for a moment.

As for the kitchen and butlers pantry, the very best authorities are of the same opinion that this indispensable room should not be papered at all in the first place, for the reason that the steam from the cooking would speedily spoil any wallpaper, even a varnished one; and further, because every bit of grease and fat that flies about will stick to it in perpetuity. Paint, with the lower portion of the walls tiled, is undoubtedly the best, and the only thing here, having the dual advantages of being quite easily cleaned and more readily and economically renewed.

How to Use 3D Program