How did the Victorians amuse themselves during a cold New York winter.  They did many of the same outdoor activities as we do today... skating, tobogganing, snowball fights, ice yachting and more. 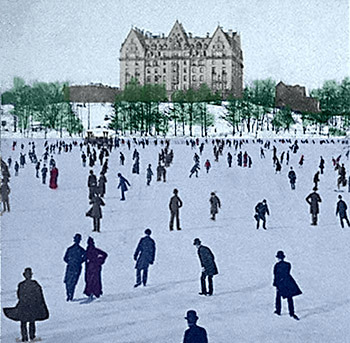 It is a fact written on the rosy cheeks of all high-spirited American women that the Ice King is no longer feared. Not only are all the people who can learn to stand in slippery places skating, but this new fashion of holding carnival in Montreal (as well as at the adverse points New Orleans and Rome), recalling the old ideas of St. Petersburg, Catharine of Russia, and Peter the Great, has brought in several new ideas to the fortunate few who own houses near New York, where they spend the winter in a sort of suburban pursuit of pleasure even in this inclement season.

Toboggan parties would have sounded very out­landish a few years ago, but now the invitation to Orange Mountain, to Westchester, to the upper Hudson, is rarely unaccompanied by this magic word. Snow-shoe steeple-chasing, curling, and hockey matches are also attempted at some of the more ambitious toboggan parties, but it is generally considered enough to invite your friends to come well done up in flannels, and to give them a sledge ride down-hill (an artificial hill must be constructed if one is not at hand) on that well known three-cornered toboggan, which is just dangerous enough to be delightful to those who like to run risks.

Ladies must be warmly and snugly dressed for these toboggan parties. The old Ulster, the fur gloves, the Balmoral stockings, and the fur-lined boots, the warm little woolen "Tam o' Shanter" cap, all fastened on securely, are the necessary requisites. These winter sports and enjoyments forbid any frills, but female dress has long been reduced to masculine simplicity. After the toboggan is over, the party is asked in to supper, and a hot and grateful cup of bouillon, some oysters, and a dish of terrapin, with punch and champagne, refresh the inner man, and always a cup of Russian tea should be offered. 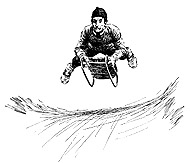 There has always been a fatal fascination about "sliding down-hill" — it is easier to descend than to climb. But the game as at present played has its dangers. If the man who holds the helm of the toboggan is not especially clever and strong, he may steer into some other craft and upset both, hence broken limbs and bruised temples. One young lady was killed last winter while tobogganing. But these accidents are infrequent, and "fortune favors the brave" in this as in all enterprises.

Snow-shoe steeple-chasing is rather confined to strong men. Yet ladies have made long journeys on snow-shoes, and have still an ambition to join in the sport of learning to walk on these very broad paddles.

The ice-boat has become a belonging also of the luxurious denizens on the upper Hudson.

To take a journey on this fairy-like craft is to reach the highest rate of speed, the minimum of resistance, the maximum of excitement. It is more like flying than any other amusement. If a lady participates in it, she must be done up like a Greenlander, an Esquiman, in tight, warm garments, and bestow herself on a very small bit of plank, when away goes her little craft. The boat has a sail, and when this is loosened the iron keel cuts the ice with a grating sound, and off at a speed of seventy miles an hour the adventurous voyager flies over the solid ice of the Hudson.

These yachts come to grief occasionally and capsize, when the inmates are in a perilous situation, miles from home on a sea of ice. On one occasion last winter a young couple nearly froze to death in this dilemma. There should be always a fleet of ice-yachts, and men with fast horses and sleighs along the banks to pick up the spilled people. No doubt it is a very grand sensation to take these rides. Like all flights into the unknown, they have a perilous fascination. But one must be sure of lung and heart, and light of limb. They are not an amusement for the lame or the lazy. 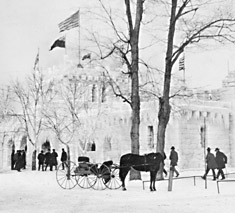 Many people like to go out to see Niagara in winter. It is worthwhile, to see what Jack Frost can do when he puts his mind to it. The ice work at Niagara, now made familiar to us by photograph, is indeed very, wonderful, and no one knows what it is until he has seen it. It is a most perfect piece of iridescence. It gives the oculist a new theme; it confounds the scientists; it is a blaze of glorious rainbow.

We have never yet, in New York, enjoyed an ice carnival, such as the gay Florentines enjoyed on one of those rare occasions when the Arno froze over, and such as old Londoners delighted in when they could roast an ox whole on the Thames. Ice and winter are such sombre facts to us; they are so severely dreadful to the poor, that we do not feel cheerfully disposed toward the appalling and paralyzing breath of January and February. Our nearest approach to a winter fệte is the sleighing in the Park, which is indeed carnivalesque. The beautiful little sleighs, the magnificent large ones, the gay colors, the tasseled horses, the robes lined with gay colors, are all very pretty and brilliant. 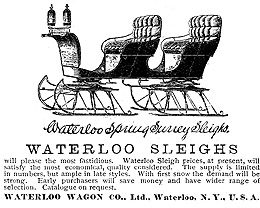 Unfortunately for any concerted action on the subject, our snow does not last. It is not to be depended upon, as at Montreal and St. Petersburg. We can not have 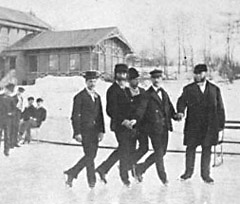 trotting on the ice, nor skating races and games on the limited surfaces of the frozen ponds at the Park. It may be said in one sense that we do not make enough of winter. We may in the future have toboggan hills built; it would be a good way to get rid of our superfluous snow — to cart it out of the side streets to some neighborhood of Jerome Park, and there have a Russian Carnival, a sort of Winter Palace, where all these spoils should be consistently cultivated. A grand snow-shoe tramp would be vastly more picturesque than a "go-as-you-please" in that somewhat degraded home of circuses and sport at the comer of Madison Avenue and Twenty-sixth Street. Indeed, the hum of  "games on the river rinks" has a very musical sound, and we might thus utilize our tramps, and also give our boys and girls a very great addition to their healthful winter sports and amusements. 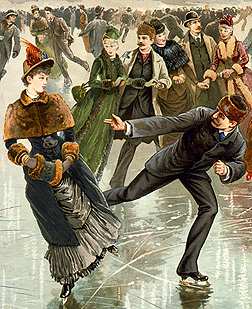 A fancy-dress masquerade carnival on the ice, or as an accompaniment to the attractions of a skating rink, has been attempted and carried out with success near our great cities several times. It would seem to be a very good thing to try in the suburbs of some inland city like Albany, New Haven, or Portland, and would call loudly on the ingenuity of the young people. That very pretty scene in the opera of L'Etoile du Nora, "les pas des patineurs" is suggestive of the beauty of costume which the Austrians adopt in winter for their winter sports. Skating to music can only be done now in a rink, which has to be a cold and shed-like place. Why not try an ice-boat band, which shall be dragged about by skaters to the convenient point on the lake, which, illuminated by the electric light, would become a ball-room. Then the "patineurs," dressed after the fashion of several nations, should with their costumes produce the peculiarities of all Northern nations — Swedish, Danish, Russian, and Polish. The novels of Miss Bremer (now too little read) are full of "sledging parties," of the visits in the winter to the distant country houses around Stockholm, the way in which those gay Northerners cheated the season of short day and long night of its gloom. The novels of Tourgueneff are full of descriptions which might be utilized for a winter carnival.

In the neighborhood of such inland lakes as Otsego and Seneca the dwellers on the borders take long drives on the ice, which has but one danger — it is the possible presence of an ice-hole. This is a serious danger, but the careful driver can be warned and fore-armed. The old-fashioned game of snowballing is the most primitive form of winter amusement, and needs no description here.  Probably it is dear to every one as a memory, although the check still glows at the remembrance of some insulting snow-ball thrown at us in mature years by some gamin of irregular morals. To go out, however, with a group of children, form the soft snow into almost feather balls to pelt them and be pelted with the white and innocuous mass (which is the best rouge in the world, for it paints the cheek delightfully), is a game which no one need be ashamed to enjoy. 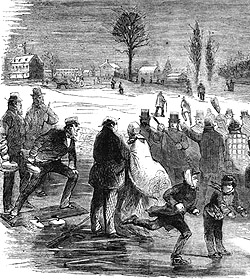 The first snow used to be esteemed as a cosmetic, and old nurses told us, "If you wash your hands in the first snow-water, they will not chap all winter." Perhaps the early attack on the cold made the skin impervious for a while, but we would not recommend it as an ideal cosmetic. Chapped hands and lips are a characteristic of Northern nations, and call for camphor-ice; but the temporary inconvenience is not to be thought of in comparison with the life-giving and most invigorating pleasure of the sport.

We are thought to share with Russia the not too fluttering credit of being the richest field for the "sprouting of abnormal beliefs in the direction of psychology and spiritualism," etc.  Mesmerism, clairvoyance, and communism are said to have a large following in both countries. A fanatical adherence to strange beliefs, a morbid introspection, is charged to be a feature of cold Northern nations, where the Winter King reigns for six months of the year. Imagination loves to work in the dark, and an out-of-door life in winter, one in which sport can figure largely, is very desirable. To avoid this "Scandinavian melancholy," which is so often referred to by the poets, Ferdinand Freiligrath and other Northern writers, becomes almost a national need, and we admire the zeal of our Canadian neighbors who have built their splendid ice palace, and have lighted it with electricity, so much like a Northern Light, and have brought all the world to their door to see their hardy sons give a concert on snow-shoes, steeple-chase and torch-light procession, grand bonspiel by the curling clubs, skating races and games on the River Rink. It does much to lift off an inherited "Scandinavian melancholy" to even read of it. 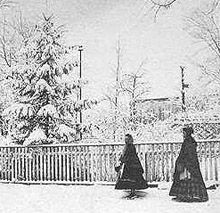 But if we share with Russia her introspection and her fanatical, dangerous, unbalanced sensibilities and dreams, we might take a commonplace lesson from her in one of the most advanced signs of her luxury and civilization. Russian tea goes a long way to redeem for her the errors of communism and the degradation of centuries of serfdom. There is no such delicate soft restorer of the vital forces, no cup which will so well enable us to laugh at cold, nothing which is so admirable a refreshment at a toboggan party, as a cup of Russian tea. They have reduced it to a science. The samovar, their famous tea-kettle, is at every railway station, and these delicious cups of tea brought in smoking hot at every spot of rest between St. Petersburg and Moscow, might well be established by us at the skating rinks and the "houses of call along our winter journeys.