by Donald Ogden Stewart. Excerpt from the 1920s etiquette book, Perfect Behavior, A Guide for Ladies and Gentlemen in All Social Crises. 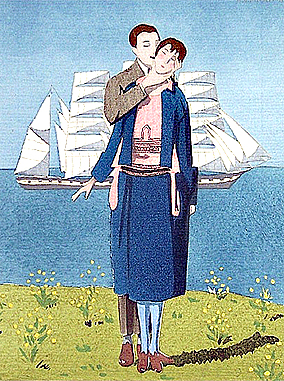 There often comes a time in the life of the members of "society" when they grow a little weary of the ceaseless round of teas, balls and dinners, and for such I would not hesitate to recommend a "picnic."

A day spent in the "open," with the blue sky over one's head, is indeed a splendid tonic for jaded nerves.  But one should not make the mistake of thinking that because he (or she) is "roughing it" for a day, he (or she) can therefore leave behind his (or her) "manners," for such is not the case.  There is a distinct etiquette for picnics, and anyone who disregards this fact is apt to find to his (or her) sorrow that the "shoe" in this case is decidedly "on the other foot." 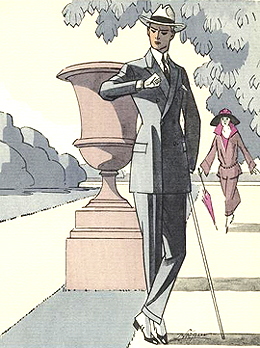 A young man, for example, is often asked by a young lady to accompany her on a "family picnic."  To this invitation he should, after some consideration, reply either "Yes" or "No," and if the former, he should present himself at the young lady's house promptly on the day set for the affair (usually Sunday).

A "family picnic" generally consists of a Buick, a father, a mother, a daughter, a small son, beef loaf, lettuce sandwiches, a young man (you), two blow-outs, one spare tire, and Aunt Florence. 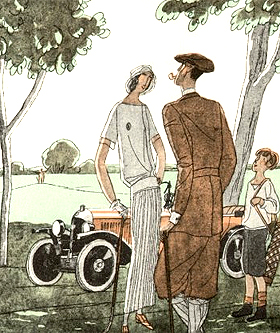 The father drives with his small boy beside him; in the rear are the mother, the daughter, Aunt Florence, the thermos bottles, the lunch baskets and you. As you take your seat you must remember that it is a distinct evidence of bad breeding to show in any way that you are conscious of the fact that the car has been standing for the last hour and forty-four minutes in the hot July sun. "We're off!" cries father, pressing his foot on the self-starting pedal.  Thirty minutes later you roll away from the curb and the picnic has begun.  The intervening time has, of course, been profitably spent by you in walking to the nearest garage for two new sparkplugs. 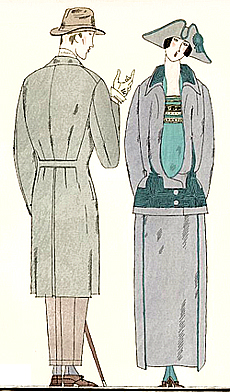 It should be your duty, as guest, to see that the conversation in the rear seat is not allowed to lag. "It's a great day," you remark, as the car speeds along.  "I think it's going to rain," replies Aunt Florence. "Not too fast, Will!" says mother.  "Mother!" says the daughter.

Ten minutes later you should again remark, "My, what a wonderful day!" "Those clouds are gathering in the west," says Aunt Florence, "I think we had better put the top up." "I think this is the wrong road," says mother. 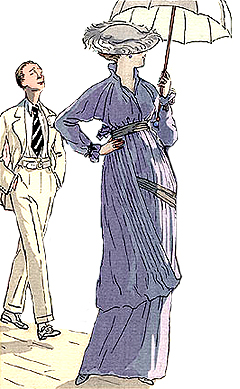 The secret of good conversation lies in discovering the "hobby" of the person with whom one is conversing, and a good talker always throws out several "feelers" in order to find out the things in which his partner is most interested. You should, therefore, next say to mother, "Don't you think this is a glorious day for a picnic?" to which she will reply, "Well, I'm sure this is the wrong road. Hadn't you better ask?" The husband will answer nothing, but Aunt Florence will murmur, "I think I felt a drop of rain, Will. If you don't put the top up now, we'll all be drenched."

The husband will then stop the car, and you and he will proceed to put up the top. In doing this, it is customary for the guest to get the second and third fingers of his right hand so severely pinched that he can not use the hand for several days.  As soon as the top is up and the rain curtains are in place the sun will come out and you can at once get out and put the top down, taking care this time to ruin two fingers of the LEFT hand. 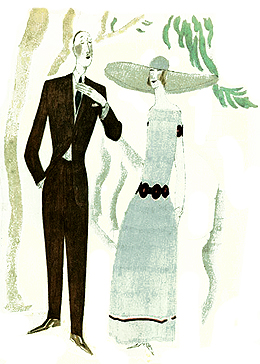 No good conversationalist confines himself exclusively to one subject, and when you are once more "under way" you should remark to the mother, "I think that motoring is great fun, don't you, Mrs. Caldwell?" Her answer will be, "I wish you wouldn't drive so fast!" You should then smile and say to Aunt Florence, "Don't YOU think that motoring is great fun, Mrs. Lockwood?" As she is about to reply, the left rear tire will blow out with a loud noise and the car will come to a bumping stop.

The etiquette of changing a tire is fairly simple.  As soon as the "puncture" occurs one should at once remark, "Is there anything I can do?" This request should be repeated from time to time, always taking care, however, that no one takes it at all seriously.  The real duty of a young man who is a "guest" on a motor trip on which a "blow-out" occurs is, of course, to keep the ladies of the party amused during the delay.  This can be accomplished by any of the conventional methods, such as card tricks, handsprings, and other feats of athletic agility, or making funny jokes about the host who is at work on the tire.

When the damage has been repaired and the car is once more speeding along, leaving behind it mile after mile of dusty road as well as father's best "jack" and set of tire tools, the small boy will suddenly remark, "I'm hungry."  His father will then reply, "We'll be at a fine place to eat in ten minutes."

Thirty minutes later mother will remark, "Will, that looks like a good place for a picnic over there."  The father will reply, "No--we're coming to a wonderful place--just trust me, Mary!" Twenty minutes later Aunt Florence will say, "Will, I think that grove over there would be fine for our lunch," to which the husband will reply, "We're almost at the place I know about--it's ideal for a picnic." Forty minutes after this, father will stop the car and point to a clump of trees. "There," he will say, "what do you think of that?" "Oh, we can't eat THERE!" will be the answer of mother, daughter and Aunt Florence.  "Drive on a bit further—I think I know a place."

Three hours and thirty minutes later (i.e. four hours past your normal lunch hour) there will be another puncture and as the car stops beside a wheat field it will begin to rain, and the daughter will sigh, "Well, we might as well eat here."  The "picnic" will then be held in the car, and nothing really quite carries one back to nature and primeval man as does warm lemonade and a lettuce sandwich in a Buick with the top up and side curtains on.

After lunch it will be time to return home, and after you and father have ruined your clothes in repairing the punctures, the merry party will proceed on its way. The next morning, if you have not caught pneumonia, you will be able to go to your work greatly refreshed by your day's outing in the lap of old Mother Nature.