Shapely curves were concealed with undefined box-shape fashions... and flat-chested was in! 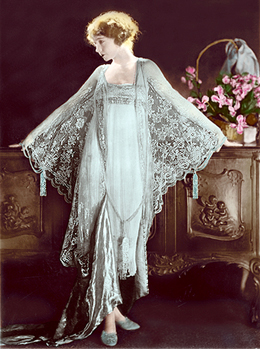 The 1920s women’s fashions exhibited an unprecedented transformation from the heavily corseted figure of the Victorian era into an almost boyish silhouette. Dresses were shapeless and loose-fitting, with skirt lengths rotating from ankle length to knee length and back again. Shapely curves were concealed with undefined box-shape fashions; and flat-chested was in!

Young women took to bandaging their breasts flat to achieve the desired manly outline or wore undergarments just as the Symington Side Lacer that flattened the bust when tightened.  1920s lingerie and 1920s underwear reflected the absence of a silhouette the same as dress fashions by mimicking the box shape in slips, chemises and negligees.

By the 1920s, the traditional cotton and lace cap of the 19th century had been transformed into a confection of colorful silk and lace-- ornamented with silk ribbons, bows, and flowers. These boudoir caps were worn in the lady's bedroom to protect her coiffure while dressing. 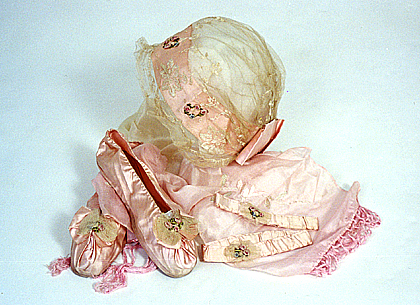 This elegant matching 1920s boudoir set would be purchased for a young lady's trousseau.  Included were pink satin slippers, garters and a boudoir cap—each decorated with lace and tiny silk ribbon roses.

A "step-in" chemise was a popular 1920s underwear garment for the young flapper of the mid-1920s. The undergarment on the right is lavishly ornamented with wide lace inserts and a pretty "boutonnière" of silk ribbon flowers. 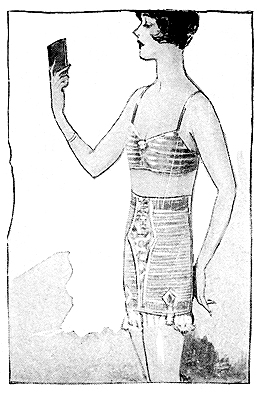 1920s women had several options in underwear to help them achieve that "boyish" figure of a flat-chest and a straight silhouette.  On the left is a "semi-laced step-in corset" of elastic with sections of pink broché at both the back and front.  It is softly boned at the back and is 14 inches long. 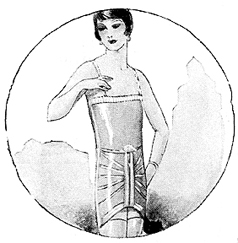 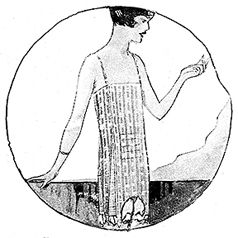 The 1920s Bramley corsele was a combination brassiere and corset of self striped flesh colored satin batiste, invisible under a "flapper" dress. It cost $5.00.