How to Add Bathroom

The circa 1900 trend was to have as many baths in the house as possible, and all the fittings of the bathroom were made most comfortable and luxurious. Some bathrooms were of course much more luxurious than others, but one and all were fitted up so that not a single luxury — in old houses a luxury, now a necessity — shall be lacking.

Many of the new bathrooms were most luxurious; not only was the free standing tub of porcelain, and whatever plumbing there may be of silver or nickel, but all smaller fixtures, such as sponge - racks, soap-dish, etc., were also of silver or nickel. The basin and pitcher were often of cut glass, while the tooth mug and other implements were either of glass or of fine china. There was a large white rug put directly in front of the bath tub, but the ordinary cloth mat covered with a crash towel was often substituted. Where expense was not considered, the white fur rug was, however, generally left. Many of the bathrooms had hardwood floors, others had antique tiles, others again were covered with linoleum or oil-cloth, but the floor covering must always correspond with the wall, which can be either tiled or covered with tiled wallpaper.

The bathrobes worn were very dainty garments, and while of course they were not

made tight-fitting, they were no longer the shapeless, awkward-looking things from the past, but, on the contrary, were very graceful and most carefully made. The purpose of a bathrobe was to have a garment that could be easily slipped on and off, and which must at the same time be warm enough to prevent a chill after coming out of the bath; the material ought to be selected with care, and almost all the new bath gowns were lined.

There were two different styles that were especially popular—one made on the plan of a Japanese kimono, and another style which had considerable fullness in the back, but the fullness shirred in several rows, so that it fit close over the shoulders. The latter style was made with the long shawl-like sleeves, and was fastened in at the waist with a cord and tassel. Flannel, flannel cashmere, and even silk were used for these wrappers, and they were lined through with with a flannel, an albatross cloth, or, most luxurious of all, had a wadded lining. It was rather a fad to have these wrappers in most delicate shades of coloring. 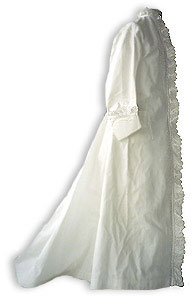 There were some made up in all white that were most attractive. One in a heavy white camel's-hair had the facings turned back on the outside of both the sleeves and the fronts, the facing made of white silk like the lining. Then there were the quilted silk wrappers and the old - fashioned blanket wrappers, and some pretty styles came in elder-down flannel, the collar and sleeves bound with satin ribbon. These last were sold ready made for a surprisingly small sum of money. They were most useful and wore well. The ordinary bath toweling that, at one time was made up into bath wrappers was not often used, but was a very good summer material for this purpose. 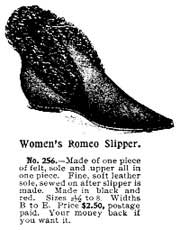 Bath slippers did not have heels, or else were made of some material like quilted satin or silk, on the plan of what were called Romeos, slashed at the sides. These were easily slipped on or off, were very warm and most comfortable. An attractive idea was to have the wrapper and the slippers of the same color, or if a white wrapper was used to have it tied with colored ribbons, and then have the slippers match the ribbons in color. This was not such an expensive idea as it seems, for both wrapper and slippers could be bought ready made. 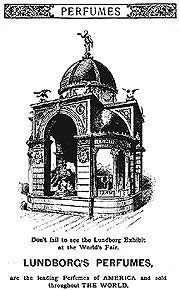 There were a great many perfumes and unguents used, some of which were absolutely harmless and very pleasant. One thing in particular made bathing a delight, and that was the little bags made of cheese-cloth filled with bran or oatmeal, orris root, and some fine soap chopped up. This gave a milky look to the water, was very good for the skin, and left a pleasant perfume. The many toilet waters were chosen carefully. Anything with a very strong scent was avoided, but a few drops of some of the good perfumes made a bath much pleasanter. These bottles were kept in the bathroom, either on the 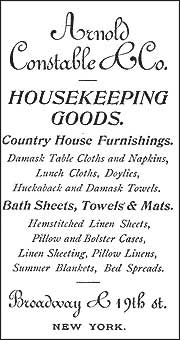 wash-stand or on a small white wooden shelf, were in silver stands; indeed, everything in the bathroom was as dainty as possible; and the woodwork was white if possible.

The towels that should always hang in the bathroom were, first and foremost, the bath towels of the best quality and largest size. Then there were the very fine damask towels, and also two or three towels of rather heavier damask, and a very fine face cloth. This face cloth would remove dust and dirt from the face where a sponge was practically useless. The number of sponges were decided upon by one's personal ideas, but there was at least two — one large and one small. 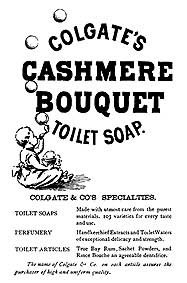 A much disputed question of the day was the soap. The fine French soaps were the pleasantest, but they did not agree with every one's skin, and some people preferred the plain soaps. In fitting up a bathroom for a guest there was always be a fresh cake of soap in its paper wrappings. This soap could afterwards be taken, washed off, and used by children or servants, but it was the height of rudeness to offer a guest any soap that had been used before.

The flesh-brushes seen in every well-appointed bathroom were, of course, private belongings.